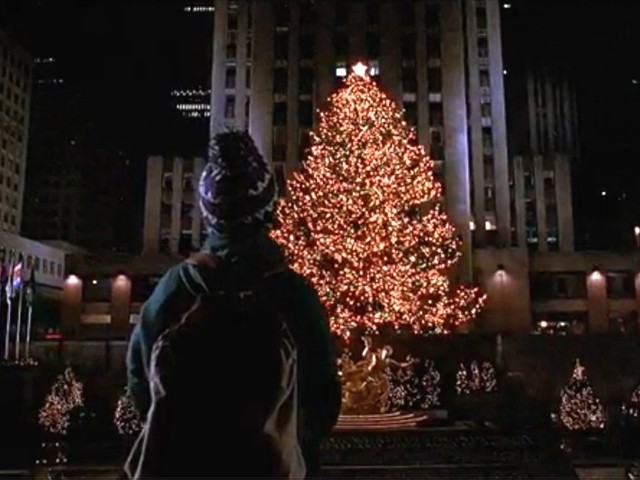 Beautiful ornaments of all colours covered the tree and glittered under the dim light of the tiny fairy lights which twinkled in warm shades of yellow, red and green. PHOTO: TWENTIETH CENTURY FOX

The sweet smell of gingerbread cookies filled the chilly air in the crowded market on Christmas Eve. A choir of young men and women stood in lines, singing cheery Christmas carols in their melodious voices. They wore black robes over their dresses and held gold candles in the palm of their hands.

Amidst the crowd, a lush evergreen conifer tree sat in the middle of the marketplace. Beautiful ornaments of all colours covered the tree and glittered under the dim light of the tiny fairy lights which twinkled in warm shades of yellow, red and green. To complete the look, a large star dazzled at the very top of the tree. The tree sat over a pile of wrapped cardboard boxes that were made to look like presents. Each of the boxes was brightly coloured with unique patterns printed all over them. Small stuffed reindeer statues stood around the tree, their noses shone bright red and the bells around their necks jingled. A fake snowman accompanied the deer. He wore a small fedora that perfectly complemented the checkered scarf around his neck. A plump man in a bright red Santa costume was spreading Christmas cheer. His white beard wiggled and his stomach jiggled as he laughed heartily.

“Ho Ho Ho, Merry Christmas and a Happy New Year,” he said while handing out cookies and cakes each time a child approached him.

Amongst the crowd, an eight-year-old William struggled to make his way up to Mr Claus. His hair was messy and matted as if it had not been washed or brushed in a long time. His clothes were tattered and old with rips all over. His complexion appeared dark because a layer of dirt and dust covered his face. However, his smile shone brighter than all the lights combined. He ran up to the old man and chirped “Merry Christmas”, a small silver cross flickered from underneath his unbuttoned shirt as he jumped up and down in excitement. Santa returned the smile and stroked his head gently before handing him a styrofoam plate upon which he placed a gingerbread cookie and a small fruitcake.

Ecstatic, William made his way towards the pavement where he would sit and eat in peace. As he reached for the cookie with his mud covered hand, a boy ran past him knocking his plate to the floor. He bent down to pick it but before he could pick it up while it was in good shape, the cookie got trampled on by the other children running to Santa in excitement. Tears welled up in his eyes as he fell to his knees to gather the remaining crumbs of the cookie he had been dreaming of eating all year. He could not ask for another because he feared Santa would think he is greedy for asking twice and he definitely could not afford to buy his own. Devastated, he sat on the floor crying as his stomach growled in hunger. He longingly looked at all the children who enjoyed their Christmas treats around him, in hope for some food. His helpless look did not move any passersby because everyone was too busy celebrating their own happiness and did not care much for what was happening around them.

His needy gaze fell upon a child, about the same age as him, who sat just a few steps away from him. His attire was slightly different; he was wearing a white shalwar kameez with a prayer cap. He recited “Bismillah” before bringing the cookie to his mouth. Before he could take a bite, he made eye contact with the longing gaze of the child who had lost his cookie. Placing the cookie back in the plate, he stared at it for a while, unsure of what he should do. All of a sudden, he rose and William’s heart continued to sink, thinking of how he was not going to be able to taste the cookie this year. He continued to look towards the ground where the remains of his cookie lay. Suddenly, he heard a voice behind him.

“Assalamualaikum! My name is Mustafa, do you want to eat with me?”

William looked up to find the same boy standing over him, extending his plate towards him. Mustafa’s face flashed a huge grin as he nodded, encouraging William to share his food. Reluctant to do so, William shook his head and directed his gaze back to the ground. Determined, Mustafa made himself comfortable next to William and extended the plate towards him once again. William hesitantly looked up, his gaze welcomed by an uplifting smile. Slowly, his frown transformed into a bright smile again. Mustafa broke the cookie in two halves and gave one half to his new friend.

William put his arm around Mustafa’s shoulder as they bonded over the cookie.

They came from two completely different walks of lives, two different religions. Though they had never met before in their lives, they treated each other better than their own blood would have. In this intolerant society, they spread much-needed love. Amidst the cold, chilly world, their hearts were warm.