Human Rights Day: What will you ‘celebrate’, Pakistan? 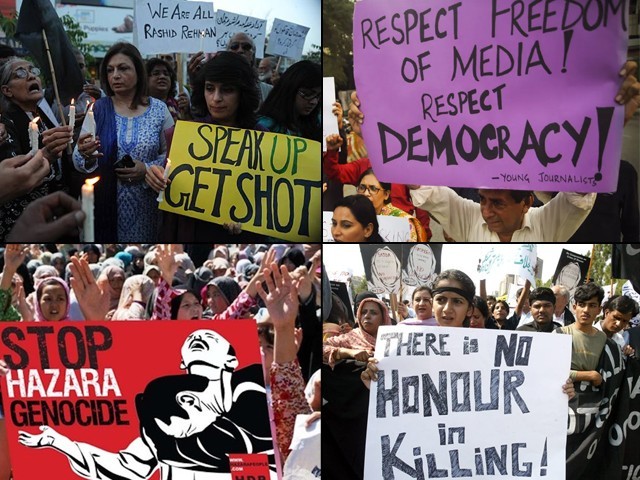 Human rights violations aren’t taken seriously and majority of the population remains unaware of the fundamental human rights that the UN and Pakistan have granted them.

Every year, December 10th is marked as the Human Rights Day. On this day in 1948, the United Nations General Assembly (UNGA) adopted the Universal Declaration of Human Rights, a document that lists down basic human rights guaranteed to the population of the world. This year marks the 70th anniversary of this resolution.

It is important to note that sustainable growth is not achievable until and unless the human rights of the world are protected. Besides commemorating 70 years of the resolution, we should vow to stand for the civil, economic, political and cultural rights of our people; after all, change starts at home.

However, the journey towards acknowledging human rights hasn’t been easy. There are still many countries that deprive their citizens of these fundamental rights, which clearly points to the fact that we have a long way to go.

A brief history of the Human Rights Day

After the end of World War II, many countries realised that in the absence of proper human rights legislation, narcissist regimes like the Nazis could unleash unimaginable atrocities on their citizens and on the people of the world. Hence, a consensus was reached that the United Nations (UN) should draft a resolution that clearly states and protects fundamental human rights. The task of devising a draft for the UN resolution was given to an 18-member committee comprising of people from various countries and different social and political backgrounds.

At the time when the resolution was presented, United Nations had 58 members and out of those, 48, including Pakistan, India and China, voted in favour of the resolution. Saudi Arabia, Germany and USSR abstained from voting in favour, fearing that the new human rights resolution would have a negative impact on their social and political order.

The human rights situation in Pakistan

Since Pakistan is one of the signatories of this historic declaration, the country is expected to ensure the human rights granted by the UN are available to its citizens. However, the deteriorating human rights condition in the country has been a point of concern. According to Amnesty International, freedom of expression in Pakistan is not granted by the state which is why there is an intense on-going crackdown. It further added that the ‘Prevention of Electronic Crimes Act, 2016’ was used to intimidate, harass and arbitrarily detain human rights defenders for online comments against the state.

There were widespread enforced disappearances, journalists were attacked by unidentified assailants, impunity was prevalent, mob lynchings were rampant and minorities continued to face discrimination. Attempts to restrict child marriage were blocked by the Parliament and women continued to be killed in the name of honour despite the 2016 law criminalising the practice. It is estimated that there are about a 1,000 honour killings every year in Pakistan. In fact, Human Rights Watch also reported that in the year 2018, “women, religious minorities and transgender community faced violent attacks, discrimination and government prosecution while the authorities failed to provide adequate protection and hold perpetrators accountable”.

Amnesty International also observed that around 58% of the household in Pakistan were facing food insecurity, and according to the national nutrition survey, 44% of the children remained underdeveloped and short for their age.

Human rights violations aren’t taken seriously and the majority of the population remains unaware of the fundamental human rights that the UN and Pakistan have granted them. In conversation with Express Tribune, famous poet and intellectual Iftikhar Arif said that most of the local organisations working for human rights have failed to create a narrative that respects these rights. Most of the elite engaged in the development and anthology work only conduct seminars and gatherings for public relations, media attention and to get more funds for their organisations.

Upon closer look at these organisations and activists, it seems that Arif may be right in his assumption. These defenders and their organisations don’t engage with the marginalised segments of the society at the grass root level and instead, hold their ceremonies in luxurious hotels and clubs where majority of the attendants are from the elite class. There are a few people from the marginalised communities present, however, who are only invited for photo-ops to impress the local and international media.

On the other hand, many right-wing or conservative groups attack these organisations and deem them as foreign agents that are dead-set on defaming Pakistan. They argue that these people deliberately only highlight issues in Pakistan and never talk about the massive atrocities being committed in Kashmir, Palestine or in many other places around the globe. This makes things difficult as like-minded individuals, who are mostly uneducated, buy in to this argument and spew hate towards activists and organisation. This makes raising awareness on issues more difficult when people refuse to listen.

For example, forced marriages and honour killings are linked to religious beliefs of people and hence they justify these brutal acts. Likewise, marginalising Ahmadis and other minority communities in the name of blasphemy is considered a fundamental right by the majority of the population. Moreover, the Lesbian Gay Bisexual Transgender (LGBT) community cannot even openly reveal their identities without putting their lives in danger since these ‘upholders of faith’ consider them as an abomination.

When these extremists have more control and influence on the minds of the people while our activists fail to come out of their comfort zones and engage with people, there is no wonder that Pakistan has not improved its position when it comes to human rights.

State, on the other hand, shows reluctance in devising policies that go against theses popular beliefs for fear of backlash and that strengthens these oppressors who continue to wreak havoc in other people’s lives.

Speaking to the Express Tribune, former Pakistan’s ambassador to the US Hussain Haqqani claimed that human rights organisations and defenders have been trying their best.

“It is never easy to compete with a state-sponsored narrative backed by repression and demonisation of alternative views.”

Haqqani is of the view that there is no use engaging in dialogue with extremists and religious organisations for the benefit of human rights protection in the country.

“There is no evidence that religious extremist groups backed by the state have any interest in dialogue. The state uses them to delegitimise discourse on human rights while they themselves consider everyone other than themselves as unbelievers who must be silenced.”

When talking to the Express Tribune, journalist and intellectual Raza Rumi highlighted that the main reason for the failure of the human rights narrative is that it is seen as a western agenda and the militarisation of society has led to the belief that constitutional liberties can be trampled. In a national security state, rights are subordinate. It has been a difficult journey for the likes of IA Rahman and the late Asma Jahangir to stand up and virtually impact the society through their hard fought battles. This year, the late Jahangir has been nominated for the UN Human Rights Awards which coincides with the celebration of the 70th Human Rights Day.

The journey to protect basic human laws is long and the road ahead is very difficult. One hopes that Pakistan will produce more people like Rahman and Jahangir in the future who will be able to prevail over the forces of destruction and make Pakistan a better place for each and every one of its citizens.