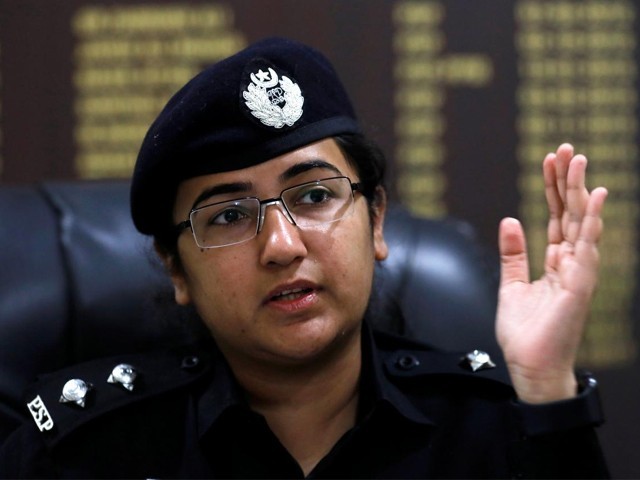 Suhai Aziz Talpur, officer of Assistant Superintendent of Police, gestures during an interview with Reuters at her office in Karachi, Pakistan November 24, 2018. PHOTO: REUTERS

A week ago, three armed men attacked the Chinese consulate in Karachi. Before they could reach the diplomatic staff inside, the militants were killed in a police operation led by SP Suhai Aziz Talpur. The encounter also resulted in multiple casualties, including two visa applicants and two policemen fighting on the frontline.

From CNN to Reuters, the news made rounds worldwide. Talpur is being glorified as the daughter of Pakistan, representing the face of bravery and women power. Restoring Talpur pride, her pictures are being juxtaposed alongside Faryal Talpur, who is currently embroiled in a money laundering case. Chinese media too is in awe of Suhai’s courage and beauty, some even commenting on the similarity between her and a famous Chinese actress, and proposals of marriage have poured in from across the border.

In the middle of a hard day, Pakistan’s 🇵🇰remarkable women rise to be the silver lining. So proud of SSP Suhai Aziz Talpur, the woman who fearlessly spearheaded the vanguard of the successful police operation against terrorists at Chinese consulate. pic.twitter.com/tsu1bMttLz

In d world full of Faryal Talpur be Suhai Talpur 🙏🏼

Meanwhile, a strong backlash surfaced on local news and social media, questioning Suhai’s real contribution and mocking her for what is being labelled a publicity stunt. In a rather distasteful attempt, a local artist came up with a cartoon showing Suhai flaunting a medal and basking in media attention while standing on top of two bleeding bodies of the policemen martyred during the operation. The cartoon blatantly discredits her contribution, while implying that she tried to steal the limelight otherwise deserved by her team members who lost their lives during the encounter. From the contented expression sketched on Suhai’s face, it almost seems as if she took their lives on purpose.

On the contrary, Suhai has repeatedly acknowledged the efforts of the martyred policemen. In an interview, she explained that even though it was her team’s effort, the deceased played the most crucial role in resisting the attack. She has repeatedly stated that the real credit goes to Assistant Sub Inspector Ashraf Dawood and Constable Amir Khan for keeping the terrorists engaged.

And yet, with a now familiar sarcastic undertone, people are asking if “mohtarma” (madam) Suhai was even there during the encounter. A news report went on to raise doubts if the pistol in her hand was anything more than mere pretence. Mocking her actions, as seen in the footage from the end of the operation, the anchor suggested Suhai was simply waving the pistol and walking in and out to attract the media’s attention. The anchor further questioned if Suhai was not wearing a bullet proof jacket because she reached the consulate when the operation was almost over, and hence there was no danger requiring protection.

In a manner more akin to moral policing, the presenter claimed Suhai hadn’t even visited the families of the deceased policemen who, along with the injured guard of the consulate, are the real heroes. While the martyrs deserve their share of tribute and attention, blaming Suhai for the loss of their lives or the lack of media attention on them simply goes back to our patriarchal mindset. Would Suhai be getting mocked and criticised if she wasn’t a woman? Probably not, and here’s why.

On October 4th, the Karachi police completed a “successful” operation against Lyari’s notorious gangster Ghaffar Zikri. The encounter also resulted in the shooting of his four-year-old son who, according to the police, was used as a human shield. This is how a Pakistani news channel detailed the police encounter:

The news ticker continued to state,

“Killing of Zikri is a huge success: Karachi Police Chief.”

Sheikh was repeatedly shown embracing other men at the encounter scene, and answering questions from news reporters. Nobody accused him of stealing the limelight. No satirical illustrations were circulated to judge his actions or statements. What’s worse is that even though a four-year old was killed by the police in this operation, nobody questioned the police. In Suhai’s case, however, the accusations are being levelled almost as if she killed her team members herself.

Even those who haven’t blamed Suhai for the media attention she has unintentionally attracted, comparing her with the martyred policemen is no less demeaning. In all honesty, why is there a need to compare Suhai with other men in the operation as if it was a competition of genders?

Trivialising Suhai’s contribution in essence goes on to reflect our cynical mindset topped with a patriarchy too ingrained and stubborn to be tolerant of achievements irrespective of gendered identities.