Power to the people: The Kartarpur corridor has done what 71 years of dialogue could not 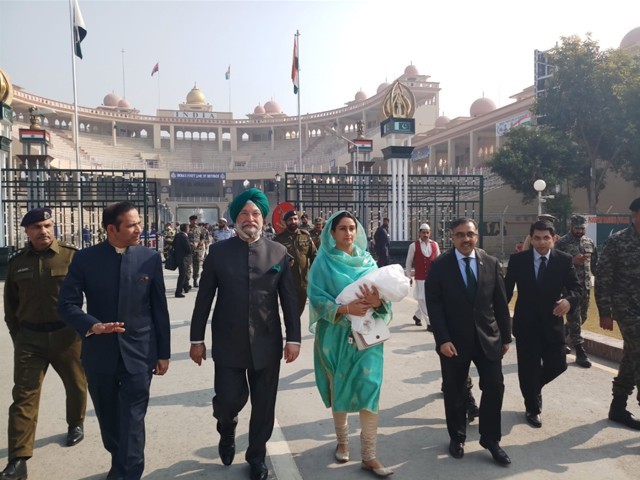 It’s the common people and their sentiments which are forcing a new narrative of peace and engagement. PHOTO: TWITTER/ PTV NEWS OFFICIAL

The symbolism is too significant to be missed.

When India was observing the 10th anniversary of the Mumbai attacks on Monday, Indian leaders were cutting across party lines and laying the foundation for the Kartarpur road corridor in Gurdaspur, Punjab. This is perhaps the first time after Partition that both India and Pakistan are working together to complete one project: a corridor that connects both sides of the border and leads to the shrine of Guru Nanak Saheb.

The corridor does not only have religious symbolism, it carries a lot of political weight that has the potential to rewrite the geo-political trajectory in South Asia.

The Mumbai terror attacks in 2008 were a defining moment in Indo-Pak relations. The incident, which India blames has been perpetrated by a Pakistani terrorist organisation, damaged the relationship to such an extent that even after 10 years it has not been possible for either of the countries to resume normal process of engagement. This is one terror attack that India has still not come to terms with.

However, the opening of the Kartarpur project promises to be the beginning of a new dawn.

The Kartarpur corridor is a four-kilometre long route between the two countries. It will connect the Sikh holy shrine of Dera Baba Nanak Sahib in India to the shrine of Gurudwara Darbar Sahib Kartarpur in Pakistan. It also serves as border gates since the route was closed off after the 1947 Partition.

Islamabad will build the passage in its own part of the territory. This joint division of the project is a significant development if one looks at the history of the subcontinent post-Partition. This marks the revival of contact between people of India and Pakistan.

Navjot Singh Sidhu, the Indian politician who attended the oath-taking ceremony of Imran Khan, was branded anti-national when he conveyed the news of Pakistan’s intention to open the Kartarpur corridor a few months ago. The media and his political opponents went after him as if he had committed treason.

But this is no surprise. Today in India, there is a hostile atmosphere which prevents one from talking about peace with Pakistan; this kind of opinion can put someone’s life in danger. Virtual and physical violence is unleashed against anyone talking about engagement with Pakistan and one could be lynched for such a ‘crime’.

A new breed of media has emerged in India in the last four years that promotes lynching and hatred. It is rabidly anti-peace, anti-talks and propagates violence. The political class that is ruling India complements such media, or perhaps they both complement each other. The ruling establishment has an open and unabashed anti-Muslim agenda, which does not believe in cementing the fault lines but widening it as far as possible to gain electoral dividends.

The corridor comes at a time when this aggressiveness is at its peak. The circumstances are not at all favourable to support such a progressive initiative. But then again, history is made by the people, not by politicians.

It’s the common people and their sentiments which are forcing a new narrative of peace and engagement. People on both sides want to reclaim their shared history, they want to own that history, and they do not want to live in denial of their common heritage.

When such overwhelming sentiment is at play, no political forces and vested media interests can ignore it. That section of media which was so abrasive and abusive of Sidhu and the intention of Imran has now fallen silent.

It’s time for proponents of peace on both sides of the border to reassert themselves. It’s time for the Indian intelligentsia to be more vocal about the need for engagement with Pakistan. It’s time to give the new prime minister of Pakistan a chance to prove his intention for peaceful dialogue.

There is no doubt that the wounds of the 26/11 attacks are still deep, but India cannot survive with a festering wound. Healing is important for a healthy subcontinent and Islamabad can play a great role in complementing that healing process.

Imran’s government should take necessary steps to act against those that were found guilty by the international community in perpetrating the terror attacks in India’s financial capital in 2008. There is no denying that Pakistan has suffered more than India at the hands of terrorism but the only way both countries can heal is by fighting the menace together.

The Islamic Republic understands the consequences of going soft on terror. It is a witness to the growing radicalisation of common people as a consequence.

The largest democracy of the world is also gradually feeling the heat of majoritarian radicalisation with the advent of the Hindu right-wing. The language of hatred and the politics of hatred that the ruling Bhartiya Janata Party (BJP) and its Hindu right-wing affiliates are propagating is creating a new breed of Indians who are more parochial, prejudiced and radicalised than the previous generations.

If we do not allow peace to take its root in the subcontinent, both India and Pakistan will be devoured by the Frankenstein monsters that they have created.

The Kartarpur corridor offers a new possibility of hope and right now it is the only hope that people of the subcontinent have.