Robin Hood is dull, incoherent and fails miserably on every level 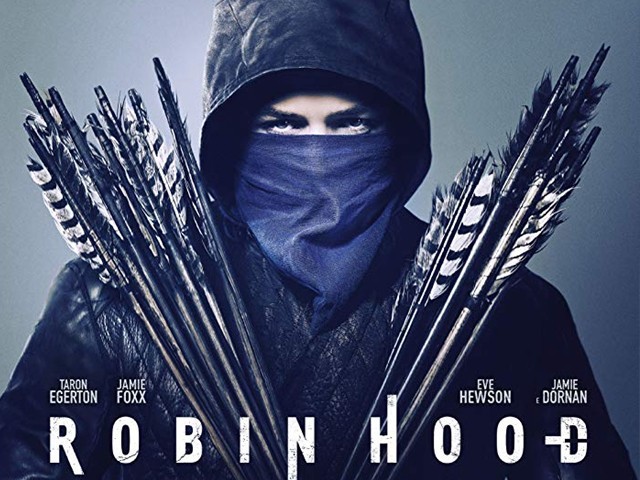 Plot-wise, there’s not much to dispute about Robin Hood and the core idea itself is not an especially bad one. PHOTO: IMDB

The Robin Hood story needs no introduction, having already been immortalised by British folklore and novels alike. However, on the big screen, the story of the arrow wielding outlaw has not been as successful.

Barring the 1973 animated take which, at least for me, stands out as a nostalgic childhood classic, there have been numerous commercial and critical flops: be it the 1991’s Robin Hood: Prince of Thieves starring Kevin Costner, Mel Brooks’ satirical take Robin Hood: Men in Tights, or Ridley Scott’s well-meaning but ultimately disappointing Robin Hood from 2010.

The latest iteration attempts to supposedly serve as a hip and radical re-invention of the story with its revisionist take. At the very beginning, Robin Hood, played by Taron Egerton (Kingsman), tells us to forget whatever we think we know because “this is not a bedtime story”! Unfortunately, this is also where any hopes that the film had of being hip and radical go right out the window.

The basics of the story are still largely the same: the film follows the story of Robin of Loxley, a nobleman who falls in love with Marian (Eve Hewson) only to get drafted into service as a crusade to fight in the Middle East. Upon his return, he comes to learn that the love of his life is now with someone else: the politically ambitious populist Will Starlet (Jamie Dornan), while all his property and wealth has been seized by the wicked sheriff of Nottingham (Ben Mendelsohn). This forces Rob –as he is referred to in the film– to stand up and lead a revolution of the underclass against the sheriff with his loyal compatriot and mentor John (Jamie Foxx). 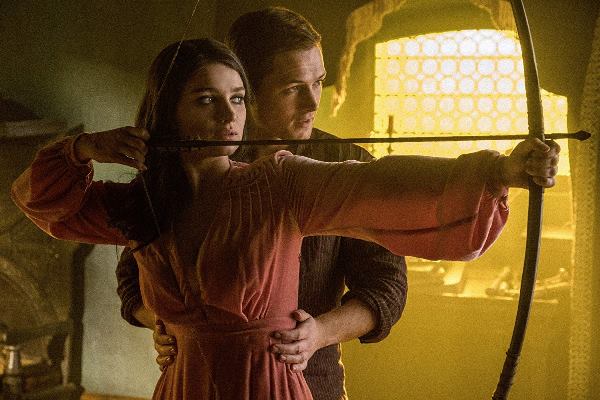 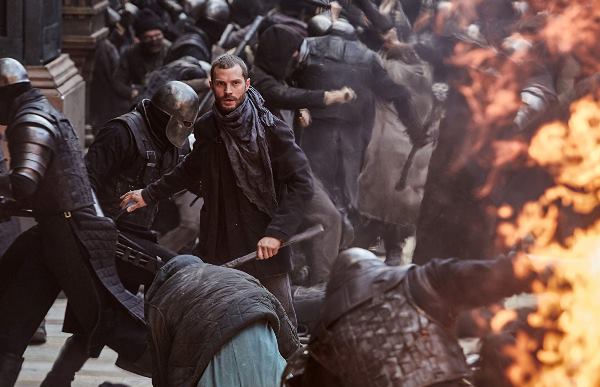 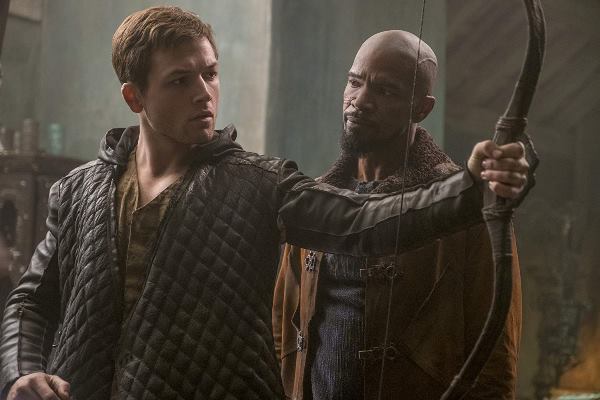 Plot-wise, there’s not much to dispute about Robin Hood and the core idea itself is not an especially bad one. However, execution-wise, Robin Hood fails miserably on nearly every level. For a film trying to be edgy and inventive, it’s rather ironic how it succumbs to nearly every dull, incoherent and overdone action sequence in the book that even Michael Bay would hesitate to use. So boring and hard to follow are these set-pieces that they actually make you wish you were watching the third-rate dialogue which is at least bordering on the comically bad territory and makes you laugh, even if the comedy may not be intentional. 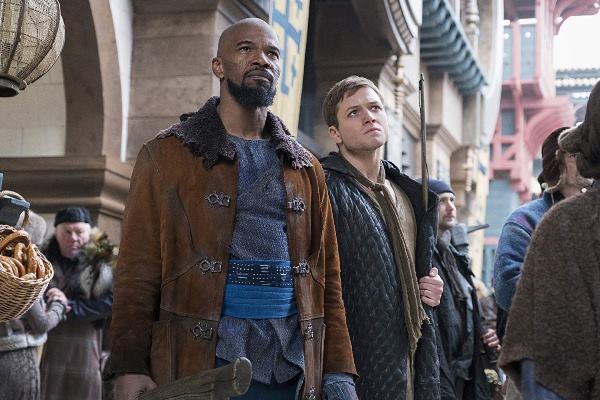 Looking at this film it’s hard to find a single saving grace. The cast which is supposed to be terrific on paper is terrible on screen. Egerton, who was likely brought on to do a Kingsman-esque riff on Robin Hood, is a literal charisma vacuum who talks about redistribution of wealth and rising up against the tyrannical Nottingham regime yet does precious little other than chasing after Marian and shooting arrows at anything that moves.

A leader of men he is not! 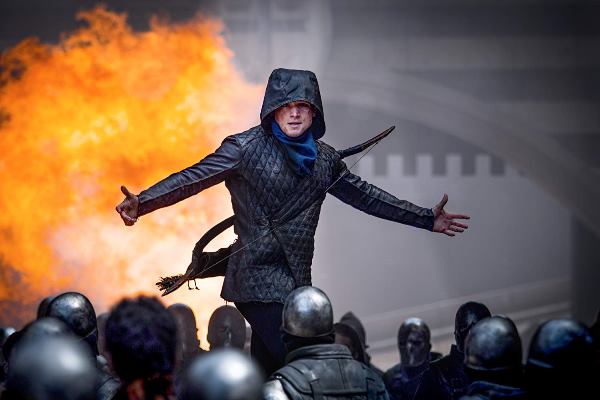 Mendelsohn, who seems like an actor born to play conniving villain roles, is awful in an over-the-top performance as the sheriff of Nottingham. Apart from looking like he wandered straight off the Death Star in his long grey overcoat, Mendelsohn takes great pride in chewing the scenery rather unsuccessfully. Foxx, on the other hand, oscillates feverishly between either blurting out his lines in a heartbeat or remaining largely innocuous as John, re-branded here as an Arab warrior by the name of Yahya. Since Robin Hood can’t pronounce his actual name, they settle for the English translation of his name. Just one of the film’s many pointless revisions. 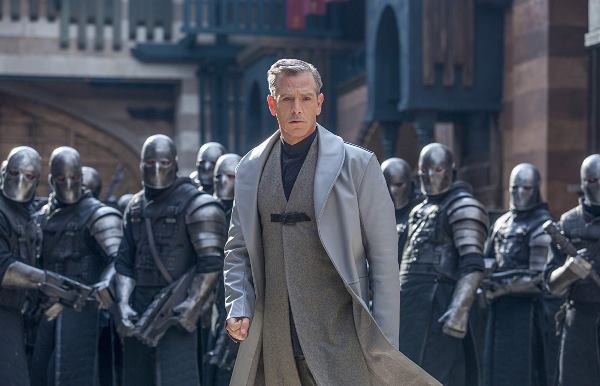 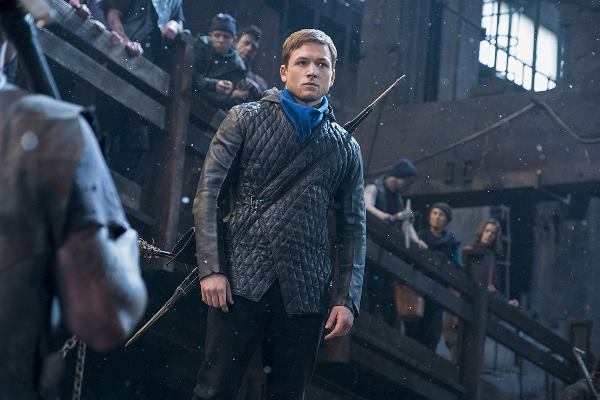 Robin Hood tries very hard to be relevant. And perhaps the film even has something to say about how the powerful rule over the weak through the politics of fear, something the Catholic Church regularly does in this film. Maybe the film even has some kind of heavy-handed message about war and how soldiers are unwittingly led into certain wars by leaders merely trying to fulfil their own self-interests. Unfortunately though, none of these themes actually manage to rise above the horrendously-crafted action sequences, charisma-less acting or brain-dead script. 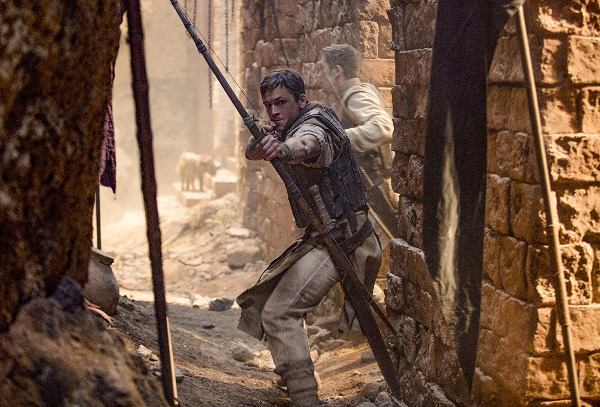 For a film that should have served as means to introduce modern audiences to an age-old tale, Robin Hood is the exact opposite: a boring slog that probably should have ended 30 minutes earlier.