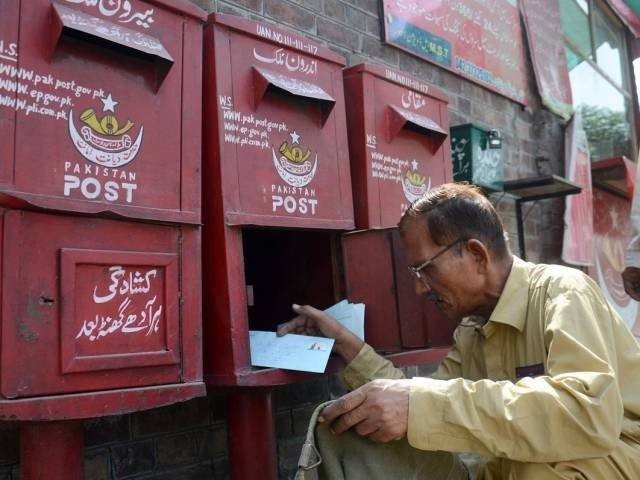 In May 2018, Rs370 million were allotted to Pakistan Post to rebrand its post offices across the country. PHOTO: FILE

Earlier in the year, the Pakistan Muslim League-Nawaz (PML-N) government tried to initiate a bid to privatise Pakistan Post, even running an advertisement in the papers. Dr Arif Alvi, simply a member of the opposition back then, criticised the government for this initiative, saying,

“We want to know why the government is in a hurry to sell assets worth billions of rupees of the state-run Pakistan Post, which is giving huge revenue to the national exchequer.”

The former ruling party argued that due to its 97,000 employees, the postal service was bringing in a loss between Rs7-8 billion per annum. However, the attempts fell flat, as no private partner showed any interest in investing or taking up a falling company. Now, its condition remains critical, with no signs of improvements in sight.

It was argued that privatisation would help Pakistan Post in two ways: not only would it maintain efficiency as a private venture, it would also generate enough revenue to unburden its financial expenditure from the national exchequer. However, both these targets can be attained without privatising it. The main problem is that over the years, due to its own failings and heavy competition from private companies, the government has simply left Pakistan Post to the neglected state it is currently in.

Privatisation does not always work for the good of the masses, and Pakistan Post’s privatisation would only end up dismantling the organisation for good while also disfiguring our national identity. In developed countries, none of the national departments are privatised for a reason, but developing countries feel that letting go of their responsibility is the best way forward when departments stop functioning due to their own inefficiency.

When the National Testing Service (NTS) was carried out in 2006, its entire system was based on courier services and significantly escalated the business of private courier companies. They came in the market providing feedback on courier delivery and confirmation, earning the confidence of customers, making this yet another opportunity missed by Pakistan Post. The matter of privatisation cannot be discussed without involving the cost to the public. Private owners only think of profits while running businesses, but the state cannot run its departments the same way. Keeping Pakistan Post under the government provides the lower strata of Pakistani state, which is a significant number, the opportunity to keep in touch and continue their businesses in an affordable manner, compared to the steep costs of private courtier companies. Disbanding or privatising it will surely make people’s lives harder and burden their pockets.

In May 2018, Rs370 million were allotted to Pakistan Post to rebrand its post offices across the country. The aim was to try and take the company out of loss and make it a profitable organisation. And yet, the issue is not that simple, for until the thousands of employees remain on its payroll, expenditure and losses cannot be minimised.

On the private front, a range of courier services are operational in the country and earn hefty revenue due to the lag created by the lack of functioning on Pakistan Post’s part. They now constantly innovate to provide better facilities to customers and increase competition in the market, but if the government could only provide the facility of tracking packages or text message confirmation, people would automatically get attracted to the service over private ventures that charge you an arm and a leg for the same.

There remain a plethora of issues, but the vital one is the lack of interest shown by political parties to this department. One hardly heard a word regarding any reform in Pakistan Post during campaigning for the 2018 General Elections, indicating its unimportance in the power corridors of the country. While the public, the media and the politicians all stress over the functioning (or lack thereof) of Pakistan Railways, Steel Mills and Pakistan International Airlines (PIA), no one talks about Pakistan Post, despite it having the capacity to unburden the circular debt and contribute to the economy.

If Pakistan Post is modernised instead of privatised and actually run by the state for profit, it may actually end up creating jobs in the long run.

The existing setup will not require a huge sum of budgetary allocation for improvement, only a strong monitoring policy and its implementation. The offices of Pakistan Post are located in every city, town and village of the country but remain in devastating conditions as they are ignored by concerned authorities. It only needs attention and an effort to highlight its importance and contribution towards the development of the country.

Instead of privatising Pakistan Post or disbanding it, Prime Minister Imran Khan paying some attention to the matter will attract people’s attention towards it, as the nation looks up to him and follows his lead when it comes to taking those matters seriously that will bring prosperity to Pakistan and ease its economic turmoil as well as strengthen its institutions. Asad Umar can attract people by elaborating the profitability possible by improving efficiency. Shandana Gulzar Khan can explain its importance by making a comparison between this sector and that of state-run departments in developed countries.  Apart from these government officials, it is the responsibility of every social media activist and Pakistani to understand the importance of revamping Pakistan Post and bringing it to the 21st century, because its revival may seem insignificant, but will only play its part in creating a prosperous nation.