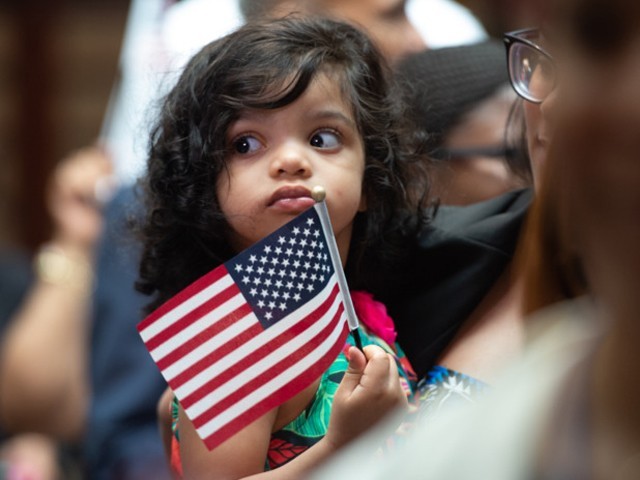 A little girl holds the US flag during a naturalization ceremony on July 3, 2018, in New York. PHOTO: GETTY

Donald Trump sure knows how to keep things exciting. Even as president, he keeps making statements to rile up his base and aggravate his opponents, making people outside the US wonder how a country’s leader can openly make such claims. Whether he truly believes in his own spiel or not, one thing is for certain – he is a marketing genius. He knows exactly what to say and who to say it to.

Before the midterm elections, Trump revealed that his team is working on a legislation that will end birthright citizenship for babies born on US soil. Trump’s logic was that the US ends up paying for the welfare and education of these babies from birth till death, which takes a toll on the social services of the country. As is the norm, this statement drew pronounced reaction from both, the conservative base that supports Trump as well as the liberals who oppose him.

The birthright citizenship clause comes from the 14th Amendment to the US Constitution, introduced in the latter half of the 19th century. Since then, it has become one of the most revered and sought after laws in the world. Everyone everywhere wants their children to be born in the US to secure an American passport that will allow them a shot at a prosperous life with ample opportunities and minimum hassles.

In the world we live in, the passport we hold has become a matter of prestige. It dictates where we travel in the world, what opportunities we have access to and how we are treated in social and professional settings. Interestingly, no matter how much we as Muslims or Pakistanis claim to hate the West and all its transgressions in Muslim lands, we will not think twice if given the option of securing their passports. Because the world has gone down this track where visas and passports trump basic humanity, and it has led to some disturbing realities.

One of them is the creation of birthing centres in New York, and similar facilities all over the US. They proclaim to provide support to all mothers that lack a support system, but charge a hefty fee to house expectant mothers during the final days of their pregnancy and facilitate the entire process of giving birth on US soil. During a visit to Houston last year, I actually met some Pakistani aunties who had rented a house in Sugarland, Texas and were playing host to wealthy Pakistani couples, providing them accommodation, medical facilitation and transportation to and from hospitals as well as the airport.

Then there are the illegal immigrants from Mexico who are responsible for what is pejoratively called ‘anchor babies’. These are babies born in the US as a means to eventually legalise their parents in America. This process can take a few decades, but people are willing to wait out this period because life in the US is far superior to life in Mexico. However, this practice is not only limited to illegal Mexican immigrants. Wealthy denizens from all over the world try to ensure their children are born in western countries like the US, UK or Canada, leading to a rise in birth tourism. This is essentially when you deliver your child in a developed economy and then return to your home country, all for the express reason of obtaining a foreign passport for your child.

In Canada, this has led to the term ‘Canadians of Convenience’. The term originated from Canadians of Lebanese origin who were residing in Lebanon and got caught up in the Israeli-Lebanese conflict of 2006. The Canadian government pledged to pull out its citizens during the conflict, only to find that many of these were either birthright babies or born to Canadian citizens residing in Lebanon. They had no association with Canada, and yet wanted Canada to help them.

Coming back to Trump, whatever action he takes on the birthright issue stands to be heavily debated in American courts by lawyers well-versed in how the American constitution is worded and structured. His logic is that the US should not be responsible for babies from birth to death if they have no association with the country directly. He also suggests that such babies will grow overseas and perhaps move to the US only for higher education or work, profiting from government benefits such as tuition subsidies without them or their parents ever having paid any taxes.

The fact of the matter is that the US is the land of opportunity. Even if one moves to the US later in life, once they get a job or start a business, they become a productive part of society. In essence, they will end up contributing to the economy at large and will actually serve to expand it.

Trump’s own grandfather was an immigrant from Germany. He migrated to the US, had children in the country, established businesses and made money. His grandson grew up to become the 45th president of the country. Perhaps this is what agitates Trump: his grandfather didn’t just have kids in the US and then go back to his homeland.

The direction Trump ends up taking on maintaining or cancelling birthright citizenship will be his prerogative. Cancelling it falls within the broader immigration category, and Trump knows his conservative support base will lap up any anti-immigration claims he makes.

Unfortunately for Trump and his supporters, birthright citizenship is part of America’s constitution and cannot be taken away by mere election rhetoric. Moreover, birthright citizenship is one part of the whole clause; amending one part means you amend the whole clause, which also entails rights of US citizens. So Trump’s administration cannot amend or remove a part of a clause which provides American citizens their rights. In fact, citizenship by birth becomes a human rights matter since a baby doesn’t know or get to choose where he or she born. But the world waits to see how the matter will unfold, as the impact of this decision is not restricted only to the US. For many, their citizenship becomes an insurance policy, particularly if they live in the developing world and wish to escape the chaos that embroils their homelands.