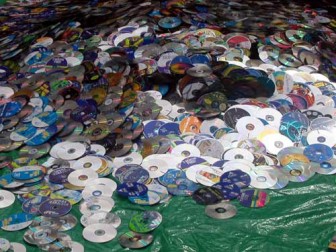 CDs would hardly qualify as proper gateway material into Metal by today’s standards but they were a mere 30 rupees.

If you got into Metal when the internet was still not widely accessible and the abomination better recognized as Justin Beiber was still being genetically engineered in a lab somewhere in Alaska, chances are, you look back fondly on the bands you discovered through 30 rupee acquisitions made at the local music shop.

Bands that you have come to adore would often hide away beneath highly deceptive cover art, featuring, for instance, Lionel Richie spacing out about something or if you were really lucky, you would get the occasional scantily clad Britney Spears.

As far as I can recall, these CDs were glorified mix tapes or compendiums, as they were called. I remember discovering Iron Maiden and Black Sabbath in the said manner and they would often be featured alongside the likes of Michael Jackson, [insert band that you secretly have a soft spot for but would rather not admit] etc. No matter how many obscure bands some of us may profess to like now, we must not forget how important these CDs were when dial up was how most people rolled.

These CDs would hardly qualify as proper gateway material into Metal by today’s standards but they were a mere 30 rupees and made life easier in times when the thought of downloading using a dial up connection would only result in self-destructive behaviour. Circumstances did not permit any kind of music snobbery and one would have to take the time out to check each individual release to see if it was any good. We have the internet to dictate our choice in music now.

The amount of money involved, although only ceremonious due to its small value, did contribute to a greater perception of worth as to the music. I still remember how I raged when a friend scratched my favourite Metallica CD.

While one cannot help but be dragged into aimlessly debating how the said CDs are, in fact, pirated but they afforded people a personalized experience procured through spending actual time and money instead of having to subscribe to what is “kvlt” and what is not, now that the internet is here.

A student who plays for metal band, Berserker and blogs at The Iron Markhor.

The lack of punk rock in Pakistan