From zombies and ghosts to satan’s spawn and bone saws, these 10 cult classics will definitely spook you out this Halloween! 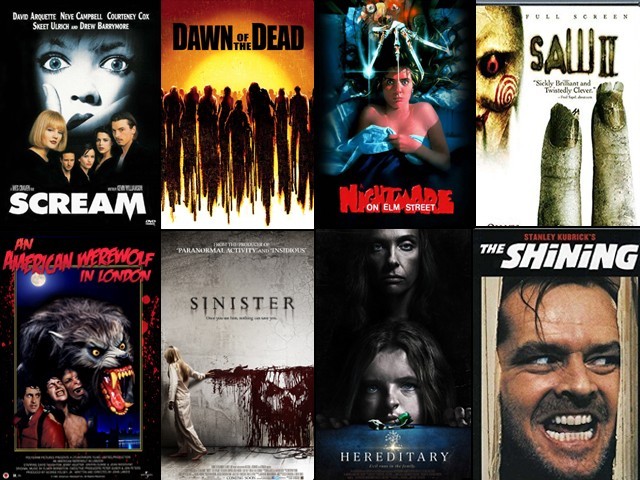 These 10 films will undoubtedly help you get in the right ‘festive’ mood for this particularly spooky season.

Halloween is a particularly spooky time of the year, and nothing gets you quite in the mood for the season like a scary movie. Now, the horror genre is an acquired taste, which is why this list features films with everything – from zombies, ghosts and werewolves to bone saws, the spawn of satan, and Jack Nicholson beating the door down with a hatchet.

There’s trauma for those who truly seek it, but also something lighter in tone for those who prefer their horror mild. Without further ado, the following are 10 films to watch (or re-watch) this Halloween.

Few horror films in recent times have come close to offering a genuinely scary story without compromising on the scares, and Sinister is definitely one of them. Benefitting from a great performance from Ethan Hawke as a true-crime novelist at odds with a malevolent force, and a foreboding sense of atmosphere established by director Scott Derrickson, Sinister stands out among the more recent lot of horror movies. It also helps that unlike most horror movies of the present, the jump scares are actually well-varied which amplifies their shock factor. Further, the film’s ingenious method of using found footage provides it with some of its most chilling moments.

Zack Snyder gets a lot of flak from comic book fans, but what many do not know is that before becoming the DC Extended Universe’s go-to man, he was an exciting filmmaker who made his mark with a remake of George A Romero’s 1978 zombie cult classic Dawn of the Dead.

Snyder’s Dawn of the Dead is one of the few remakes that actually improves on the original. The film greatly benefits from his stylistic touch as well as his use of garish, over-saturated filters which lend the movie a lot of aesthetic class. The end result is a gritty, violent and thoroughly entertaining zombie flick, the likes of which are in very short supply.

The Saw movies are widely derided as torture porn or gore fests, and rightfully so. As the series progressed, it seemed more and more interested in exploring elaborate ways to kill people, and any semblance of a story or a plot went right out the window. However, Saw II exists to provide a rare occasion where the franchise gets it right. The gruesome death traps and the subsequent gore that follows are as much a part of this as they are of any other Saw film, but along with that exists a potent undercurrent of fear and tension and an expertly crafted, thought-provoking story structure that actually challenges the audience’s perceptions.

There’s a fine line to be walked when it comes to combining horror with comedy, yet few films do it as effortlessly as John Landis’ 1981 cult classic An American Werewolf in London. Following the story of two American friends backpacking across the English countryside, one of whom unfortunately gets attacked by a vicious wolf and well…you can fill in the dots.You’d be remiss to think this is just a comedy, and though it may initially seem so, thanks in-part to the film’s wicked sense of humour, the frightening dream sequences, and incredible makeup and special effects which standout to this day, all making sure to balance the scales on both sides.

When talking about the best modern horror films, there’s no question that one film comfortably towers over the rest, and that film is none other than Ari Aster’s Hereditary which hit screens earlier this year. What initially begins as a slow burning story of grief and family dysfunction quickly morphs into something far more sadistic.

Toni Collette’s unhinged performance at the centre of this film is truly something to behold, but the film’s true genius lies in its ability to continuously sandbag the audience with its shocking twists and revelations. Without a doubt, Hereditary has already booked its place among the pantheon of the greatest horror films ever made.

By the mid-80’s, slasher movies had reached their tipping point and were struggling to stay relevant, something evident by the diminishing box office returns at the time. That was until Wes Craven made A Nightmare on Elm Street, a film that reinvented the genre with its imaginative and terrifying premise.

In Freddy Krueger, Craven found an unforgettable and nearly indestructible villain – how can you escape someone who possesses the ability to take hold of your dreams? Thus, he proved himself to be more than capable of delivering the gory set-pieces that are the centrepiece of any slasher flick. No one film perhaps single-handedly defines the slasher genre quite as much as A Nightmare on Elm Street does.

Few films are as good as Rosemary’s Baby when it comes to immersing the audience in an atmosphere of creeping, portentous dread. Methodically crafted by Roman Polanski, a director very much at the height of his powers when he made this film, and featuring a brave and transformative performance by Mia Farrow, Rosemary’s Baby spends most of its running time bubbling underneath the surface like a volcano waiting to explode.

Most of the horror actually comes from what Polanski doesn’t show, rather than what he does. And yet throughout the film, it is almost impossible to escape that palpable sense of paranoia that something terrible is just waiting to happen.

Horror as a genre possesses many virtues: it can shock you, it can scare you, and it can disgust you. But what about the kind of horror that feels so realistic and grounded in reality that it stays with you for days, weeks, months after you have seen it? The Vanishing is something close to this: a bleak, uncompromising and haunting thriller.

It is as much an investigation of grief and obsession as it is a look into the face of pure evil. By no means for the faint-hearted, the film thrives on the slow build-up of suspense and the frighteningly realistic approach adopted by director George Sluzier, all barrelling towards a horrifying climax that lingers in the mind long after the credits have rolled. Psychological horror simply doesn’t get any better than this.

Just as he had done with A Nightmare on Elm Street 12 years prior, Craven brought new life to the ever-faltering slasher genre in 1996. However, this time he chose to satirise it and the result was Scream, a sly and subversive deconstruction of the slasher genre wrapped around an intriguing whodunit murder-mystery.

Kevin Williamson’s meta, funny and highly self-aware script presents characters who have already seen most horror movies, making them familiar to the trappings, clichés and rules of the genre. The only problem? So has the killer. But while Scream works terrifically well as a self-parody, it also more than holds its own as a scary and suspenseful film, something characterised by its epic, blood-splattering finale.

Stanley Kubrick’s seminal horror classic is practically a no-brainer on any list attempting to discuss the best the genre has to offer. Not a single shot feels out of place or not in service of Kubrick’s methodical structure, while the meticulous attention to detail is truly remarkable in its own right. Headlined by Nicholson’s iconic and completely unforgettable performance as Jack Torrance, Kubrick’s masterpiece is as much a rumination on isolation and paranoia as it is a descent into complete and utter madness. Thirty-three years on, and The Shining still holds up like gangbusters.

These 10 films will undoubtedly help you get in the right ‘festive’ mood for this particularly spooky season.

Any film in particular that failed to make the list? Sound off in the comments section below!