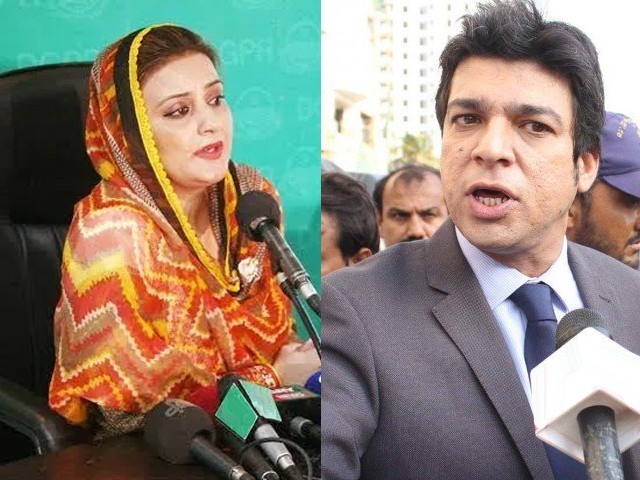 On Kal Tak, aired on Express News, Faisal Vawda got into a heated argument with PML-N's Azma Bokhari and told her to go back to her kitchen.

Politics in Pakistan has oft been marred by misogynist comments, passed on by smirking alpha-males. Over the years, lawmakers were found indulging in questionable conversations that included queer, sexist subjects such as the femininity of a woman, to the character assassination of female political workers and the riot of superiority. There certainly has been no stone left unturned. This vile talk was perpetrated by political bigwigs including the infamous Nawaz Sharif, Khawaja Asif and Rana Sanaullah amongst others.

There is silver lining for IK, Tractor trolly & newly acquired dumper can b used for hauling political garbage..no additional effort/expense

Very recently, Faisal Vawda, a sitting minister of the ruling Pakistan Tehreek-e-Insaf (PTI) was caught on live television, mockingly suggesting a female politician of the opposition to cater to ‘woman-appropriate’ household chores. In the talk show, Kal Tak, aired on Express News, Vawda got into a heated argument with Pakistan Muslim League-Nawaz’s (PML-N) Azma Bokhari and ended up saying,

(Go, go. Tend to your kitchen)

While there is no air of inferiority surrounding the domestication of a woman, the arrogant gestures and teasing manner with which it was syndicated, became a matter of great concern. For PTI, an organisation that has always claimed to be the protector of women’s rights, and climbed atop the administrative throne based on a hefty women-oriented mandate, it is very disappointing indeed to see its representatives stoop to such lows. What’s worse is the fact that an official statement is yet to be issued in condemnation.

Welcome to Naya Pakistan in which misogynist is at its peak – minister Faisal V. asks @AzmaBokhari, she should go and cook food at home.
This is how Naya Pakistan believes in women’s empowerment – I mean – they do not believe.
pic.twitter.com/4phXSHjAh7

For much of its 22 years, PTI was believed to be an organisation focused entirely on women and youth. Imran Khan’s voter base was consistently belittled based on this compartment, but throughout the course of his struggle to power, Imran reiterated the need to maintain emphasis on women, their dignity, respect, equal opportunities and participation in politics. Yet, at this crucial point in history, where the claimants of change have finally taken over, we see little to no difference. It is also important to reminisce the case of the Protection of Women Against Violence Bill, which was not only shunned by policymakers from the former ruling PML-N, but also PTI. It was amidst great furor that the bill was finally passed, followed by upheavals caused by various factions of the society.

Despite a prominent agenda of women empowerment, Imran was caught on an interview, disgracing feminism as degrading to mothers. It was further accentuated when a newly elected PTI MNA, and renowned talk show host, Dr Aamir Liaquat Hussain tweeted an inappropriate picture about a seasoned female politician. While it was deleted later on, it only proves the degradation of the prevalent male psyche.

You hv deleted yr tweet within minutes bt internet doesn’t forget bigots like you @aamirLiaquat you can’t easily get away with it. @PTIofficial @ImranKhanPTI @ArifAlvi @ShireenMazari1 @Asad_Umar you 👆🏾all of you, think twice before he sits in the parliament under PTI’s umbrella pic.twitter.com/TD97d6E9KQ

Nevertheless, it is only apt to mention that the same government has declared a ‘woman empowering’ need of assistance through the Human Rights Ministry, led by the very vocal Shireen Mazari, yet another victim of sexist comments. On the one side, where there is insensitivity, it is also countered by other sensible admissions that illuminate this darkened path. Sadly though, it is administered mostly by women who are aided by very few hesitant, but heavily-ridiculed men, for their lack of ‘mardangi’ (masculinity).

According to Jinnah, the prosperity of a nation is said to be manifested in the treatment of its women. He laid great significance on equipping women with knowledge and power, because in their hands lie progress and development. This very idea was swept off the table by Prime Minister Imran, who in his maiden speech as the elected PM highlighted this conundrum. In the face of oppression, women have been subjected to the worst of destinies, and yet many still continue to shine beyond the constrictions and boundaries in place. It is in this very essence that we appeal to the Prime Minister to pay heed to his promises.

When lawmakers and sitting ministers take light of this matter, it takes from the intensity of the situation. If such incidents are not dealt with an iron fist, it will only escalate towards destruction. And in Pakistan, women no longer have the temerity to sustain under this pressure. It is already a case of harrowing difficulty for women to prove their mettle, and if such people continue to be let loose, it will only advance the plight of our women.

For a country that is still hesitant to field women in general constituencies, and a society that culturally bars women from engaging in outdoor work, specifically one so publicly motivated such as politics, these comments only add further fuel to the fire. Pakistan has one of the lowest rates of female labour force participation, hovering around the 25% mark and stands at 141/144 on the global gender disparity rankings. It is also pertinent to note that there are still regions where basic rights, such as the freedom to be educated, to vote, to marry consensually, and the right to live freely, is still a pipe dream. In a country that is still victimised by violent customs such as honour killings, vanni ( a custom where women are forced to marry as a form of punishment of a crime committed by their male relatives), karo kari (premeditated honour killing) and so on, these incidents provide a justification for the creation of a superior man space.

In politics, the turmoil has only surged. For a profession that is considered a no-go for the educated class, and even more so for women, it is very important to create a secure environment for the encouragement of female political aspirants. It is beyond the structure of natural genders, and must be treated as such. Every individual must be given the opportunity to excel as per their potential. What’s more becoming is for the incumbent government that once rode on the feminist agenda, to inculcate these principles administratively, and immediately.

For PTI to engulf itself into the same kind of atrocities means that the future of the Pakistani women is blighted with uncertainties. This was the organisation that vowed to provide equal opportunities. The fundamentals upon which its engravings hang, specifically catered to justice, equality and self-esteem. If PTI is observed to allow such casual forms of sexism, it is inevitable for it to fall into the same abyss where its predecessors faced collapse.

Where there is only darkness, doom and despair, a fate lying on opposite scales from that promised, PTI has little room but to budge and make way. Since it is now the 21st century, and enlightenment is finally rummaging the minds of numerous Pakistanis. Such foul language, behaviour and gestures are no longer tolerable. In these times, these engagements will only be blackened by the viciousness of shame and shudders. For Pakistan is finally rising, and in so, will rise the women, the men and the status of our unsung humanity.