The “desperate” begging bowl is no longer metaphorical 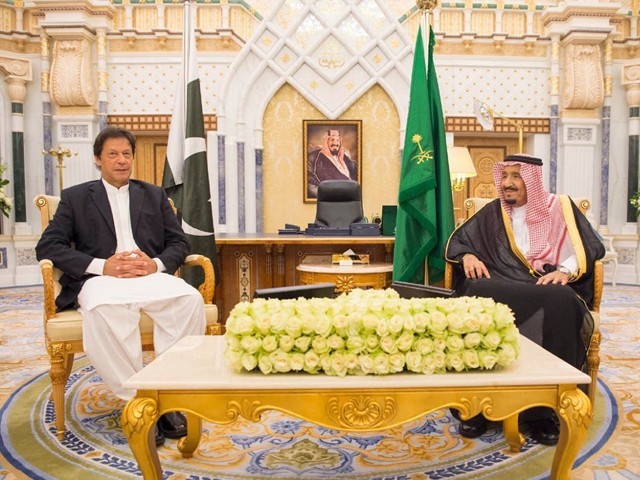 Prime Minister Imran Khan met the Saudi royal family at the Future Investment Initiative as if nothing was wrong. PHOTO: TWITTER/ PTI OFFICIAL

The saying ‘beggars can’t be choosers’ is quite clichéd, and yet it teaches a lesson from an individual level to that of societies and nations. To states, it is a reminder that while there may not be a choice when it comes to taking foreign aid, it inevitably compromises their sovereignty.

Pakistan has remained trapped in the vicious cycle of taking short-term loans from international bodies for decades. Throughout his electoral campaign and even after assuming power, Imran Khan constantly maintained that the biggest hindrance towards Pakistan’s development is debt servicing and taking external loans. In his first speech to the nation, Imran reiterated this and promised not to beg anyone for loans or help.

And yet two days ago, Imran attended the Future Investment Initiative in Saudi Arabia, known as Davos in the Desert, and finally managed to convince the Saudis to not only give Pakistan a one-year deferred payment facility on importing oil worth $3 billion, but also lend Pakistan $3 billion in cash to help us meet the current account deficit. The $3 billion in cash will be deposited in the State Bank of Pakistan to lessen the current account deficit and increase foreign reserves, which have fallen to an alarming and historically low figure of $8.4 billion.

Interesting to note is that this comes at a time when Saudi Arabia in under fire all across the world for the murder of journalist Jamal Khashoggi. Particularly after Saudi Arabia admitted that Khashoggi had been killed, the entire international community was putting pressure on the Kingdom and pulling out of the conference, which was organised to showcase Mohammad Bin Salman’s (MBS) economic vision to the world and to attract global investments.

Meanwhile, our prime minister remained mum on the barbaric crime. When asked about the matter, he told journalists that while he was concerned after Khashoggi’s killing, he had to attend the conference because Pakistan is “desperate” for Saudi money. He then met the Saudi royal family as if nothing was wrong.

It is an embarrassment for the entire nation that our prime minister not only refused to condemn what is one of the worst human rights violations in recent memory, but also openly admitted that we are “desperate”. The begging bowl is no longer metaphorical, and now that we have taken their money, we cannot utter a word against Saudi Arabia or its inhumane crimes. Is this the philosophy of the current government? If we have a monetary interest from any country, we will turn a blind eye towards all atrocities, the way we have when it comes to Khashoggi, and the way we have to the thousands of dead bodies in Yemen.

Further, when Imran was given the time to speak during the summit, he delivered a negative speech that only served the purpose of denting Pakistan’s image further. We will all be hard-pressed to find any other leader around the globe who, when asked to deliver a speech in a room full of global investors, talks only of the corruption rampant in his country, amongst other ills. A leader who, while trying to encourage investors, also tells them that the country’s institutions are weak, and the reason for that being that the previous ruling party appointed its cronies in positions of power. Not only that, you will also be hard-pressed to find a single leader in the global community who will openly inform a room full of potential investors that the country is short of money and is desperately seeking loans to get out of a financial crisis – just what every investor wants to hear. A true leader presents solutions to people, not the problem itself. After all, it is not the leader’s job to point out problems we are all aware of; their job is to lead the nation out of a crisis via a workable solution.

This was perhaps another moment of shame and embarrassment for the country as our prime minister proudly informed the entire world that our strategy is to go around friendly countries with a begging bowl, as we have no institutions or money of our own to speak of. After listening to our premier’s diatribe, no investor could have been interested in investing in Pakistan. The world, especially the business world, is not run on emotions, and when you tell them your weaknesses, they only exploit them to their advantage. Even if anyone was interested before, they will surely stay away now, because no investor would want to step in after being informed of precisely all the ways financial investment in Pakistan can be a risk. When the nation was told Imran is honest and truthful, we did not expect him to lack a diplomatic censor and air our ‘dirty laundry’ in public.

After returning to Pakistan, Imran addressed the nation yesterday to announce the good news of Saudi assistance, but then quickly reverted to the “container mode” and delivered a speech that yet again seemed better suited for an opposition leader, as he told the nation that his political opponents are corrupt and will not be spared by him. He also revealed that the masses should be prepared to go through even harder times, and will have to bear the pain that would inevitably arise due to further price hikes in electricity, gas, groceries and other commodities. One cannot help compare this to the time when Imran and his party felt that the masses should not be made to suffer, or the time when he repeatedly claimed that going around asking for money is “shameful”.

It's so shameful that we have to go to Saudis or US to help us, says Imran Khan

The current government should also note that if we do not stand with the world when it comes to issues of morality, we lose any and all authority to raise the issue of human rights violations in Kashmir and Palestine. The begging bowl will not take us anywhere pleasant, and of course, Saudi Arabia has not given us this money for free – there is always a price to be paid for favours. Though Imran maintains that Pakistan will only play the role of a mediator in the war in Yemen, he needs to provide more details regarding the terms and conditions upon which we have been given this short term credit lifeline.

From the rhetoric of fixing all our problems within 100 days, and from ‘I will not beg for loans’, to begging for a bailout and backtracking from its earlier comments, it is clear that the ruling party is now learning the harsh realities of practical politics and governance the hard way. Yes, perhaps asking for assistance has come across as the only option out of this crisis and Imran has finally realised it, but he also needs to learn how to represent Pakistan on international forums and what issues to focus on, now that he is no longer a simple politician but the prime minister of the country.