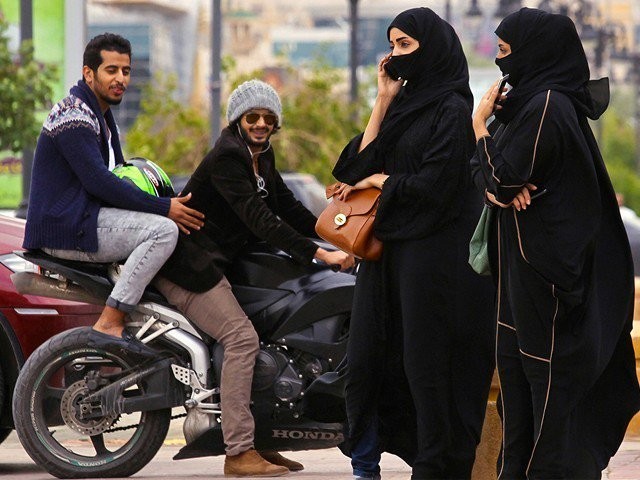 Girls as young at 10 are subjected to constant and persistent staring, commenting and other rude behaviour. PHOTO: REUTERS

Although the #MeToo movement has not taken off across class barriers or transgressed the rural-urban divide in Pakistan – the way it has in India – it’s already the cause of much alarm. Many are perturbed about the consequences of anarchic media trials. Men worry that one can put up an allegation on Facebook or Twitter and open a trial without any of the procedural protections a court trial would offer both parties – the accuser and the accused. These include lawyers, time to prepare, rebuttals and neutral adjudicators.

However, the #MeToo movement contests this position. Legal remedy is not the only way, and certainly not the most effective. In fact, court trials are mostly skewed against women alleging sexual abuse or harassment. From judges whose biases regarding class, gender, ethnicity and character prevent them from judging impartially, to poor investigative techniques, women face an uphill battle. They don’t want to invest in a justice system that exacerbates their trauma or hurt without any guarantee of justice down the road. This is the position of women worldwide, even in arguably better criminal justice systems. Inevitably, they all fail female complainants.

In Pakistan, one cannot attend a conference in the social or human rights sector without hearing the following line at least once,

“We have good laws. But there is no implementation.”

In other words, we’re good at drafting an aspirational legal standard, but we lack the will to fix the state bodies that will execute it. Hence, for women raising allegations of sexual violence, the problem is compounded: laws are simply for the books, and even if one dusts them off the shelf, there is the structural sexism prevalent in the criminal justice system.

We have laws proscribing all forms of sexually offending behaviour. These laws can be civil or criminal. If your behaviour does not fall within such sections, #MeToo should be empowering rather than a call to seek cover as some men have, shielding themselves with defamation writs.

On the criminal side, a spectrum of offensive sexual behaviour is punishable, including rape, kidnapping, assault and battery. The boundaries are clear here and most citizens recognise these as crimes. Sexual harassment too is covered by both civil and criminal laws and these will become clearer as well, but only if men listen.

On the civil side, the law is the Protection Against Harassment of Women at the Workplace Act (2010), which protects women in traditional workplaces. However, last week, the Sindh Assembly agreed to enact a parallel law at the provincial level. This law requires all workplaces to institute inquiry committees to investigate claims of sexual harassment. A designated ombudsperson can review their decision if one of the parties is dissatisfied with it. The definition of sexual harassment has two parts, and requires that there not only be unwelcome (non-consensual) offensive behaviour (sexual advance, for example), but also that the behaviour interfere with the person’s performance in the workplace, or cause it to become hostile for them.

On the criminal side, sexual harassment is encompassed under Section 509 of the Pakistan Penal Code.

Can winking and staring be considered criminal offences under 509?

Any sound or gesture directed at a woman or girl in public, intending to be insulting to her and done with the intention that she sees or hears it or that it invades her privacy, is an offence.

But this happens all the time in Pakistan. Girls as young at 10 are subjected to constant and persistent staring, commenting and other rude behaviour. It shouldn’t be a surprise to anyone that it hinders their movement in public, affects their self-image and interferes with their participation in public life.

Yet it persists. In other words, almost all the women and girls in Pakistan cope with criminally offensive behaviour every single day. If they complained to the police every time, we would need a special force just for street harassment. Instead, women and girls, consciously and otherwise, make all kinds of coercive and social accommodations in their dressing, timing, mobility, how they live their lives, and how they project their image.

Can flirting, unsolicited texting, or getting the attention of someone with words or gestures, also be considered a criminal offence?

Telling someone you’re interested in them for friendship or romance is not criminal behaviour on its own. It veers into criminality when accompanied by an intention that the interaction annoy, insult or intimidate someone. For a non-lawyer, that means that once someone has shown they are not interested, subsequent or persistent messages or solicitation may be criminal behaviour.

But one message or sentence alone can run afoul of Section 509. That would turn on the intention of the alleged harasser. Are they trying to annoy and intimidate? It’s not such as easy question, as most harassers would profess an innocent intention. But such intention can be inferred based on context, and context is all about power. Power emanates from age and social status; it’s found in multiple hierarchies of personality, class, employment, gender, sexuality and ethnicity that we negotiate in our daily interactions.

Thus, if an older, powerful, married man with a say in your job or the ability to taint your reputation as a young person makes an advance of a sexual nature (even without any contact), it may be a sexual offence under 509.

That would be a feminist reading of the law, even if feminists disagree on penalties. But we are far from feminist readings of law in Pakistan. We are simply requesting better implementation of the laws we currently have.

When the law is implemented, we hope it’ll be done with all the safeguards the system must offer both sides, free of systemic gender bias, and within international norms of proportional and fair punishment. And that would lead to overall behavioural change.

In the meanwhile, #MeToo is already making such changes so that people can finally understand the nature and toxicity of the harm done to women by sexual harassment, both at the workplace and elsewhere. Listen to these voices instead of reaching into the arsenal to deny and negate. They’ve been silenced for a while.