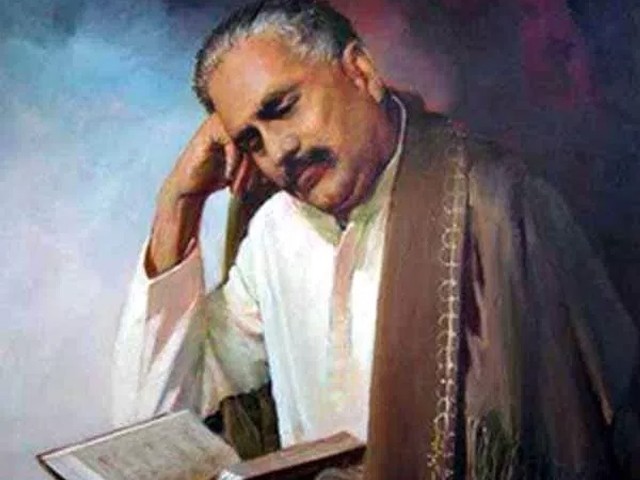 Regarded as Pakistan’s national poet, his literary work holds as much importance today as it did when he produced it. PHOTO: FILE

(Why should I play the part of the loser and refrain from seeking what I can gain?

Why shouldn’t I think of the future, instead of mourning the losses of the past?

Why should I listen to the woes of the nightingale?

My friend, I am not a flower who will remain silent

It is truly my poetic ability that gives me the courage to express my feelings.

May I be cursed should I ever complain to God)

Having caught the Coke Studio version of Shikwa /Jawab-e-Shikwa a few months ago, I realised that there is an irony abound in that.

Allama Muhammad Iqbal recited his Shikwa in 1909 at a small gathering at Lahore’s Anjuman-i-Himayat-i-Islam. The recitation produced quite the stir, and to date, Shikwa possibly remains Iqbal’s most controversial poem, with several admirers and just as many critics. The poem was released at a point in time when Muslims in India had all but lost their identity, their heartrending circumstances having had a profound effect on Iqbal. And the grievances that Iqbal penned in his Shikwa to the Higher Orders are long and heartfelt; they navigate Islamic history in a pursuit to understand what caused the downfall of Muslims.

In the world of Shikwa, there is little that is unknown about Iqbal. Hailing from a Kashmiri family based in Sialkot, Iqbal ventured onto Europe, discovering Islam in the western world. Yet here is a man with eccentricities and idiosyncrasies of his own: describing Iqbal as complicated would be an understatement. As the combined poet, philosopher and political theorist that he was, he either continually evolved, or in view of others, regressed in his approach to the idea of a Muslim political identity. Iqbal never took it upon himself to tell the community what it should do; instead, he placed his intellectual energies at the disposal of his people, using poetry as his medium. Regarded as Pakistan’s national poet, his literary work holds as much importance today as it did when he produced it. Among others, revisit Khudi (self-realisation) and Labb Pe Aati Hai Dua (a child’s prayer seeking benevolence in character and a life spent in serving humanity).

Shikwa is an outstanding composition, consisting of 31 stanzas with six verses each, beautifully highlighting Islamic traditions and values, touching even the hardest of hearts. Although one cannot negate the aesthetics of the poem, many orthodox Muslims did have reservations about its message. It centred on the lament that Muslims suffered disloyalty at the hands of God, where it very blatantly expressed their disappointment at seeing their God bless ‘the others’, since being “God’s chosen people”, how could anyone else possibly be blessed? Given this theme, both the poet and his poem were accused of being disrespectful.

Iqbal’s poetry largely represented Islamic renaissance, symbolising the growing aspirations of a budding Muslim middle class, and Shikwa was no exception. Admittedly, the poem invokes immense soul searching and simultaneously questions our views on why we are, where we are. Modernists during the Partition era maintained a thought revolving along the lines of ‘theft’: that material progress and glory was the inheritance of the Muslims, stolen from them by the West. Unsurprisingly, Iqbal also emphasised this theme in his Shikwa, wherein he questioned God as to why He allowed Muslims to continue suffering, despite them passionately following the word of their God and His beloved Prophet Muhammad (pbuh).

When Iqbal wrote Shikwa, orthodox religious clerics called him an infidel, and in all honesty, Shikwa does emanate a very strong sense of entitlement. Did this entitlement arise from the historical glory of Islam or was it a product of its follower’s imagination; since they were Muslims by faith, they had entered an eternal covenant with God Himself whereby they automatically deserved to be protected and revered for times immemorial? It was perhaps either or both of being called an infidel and a sudden reaffirmation of faith that triggered the release of Jawab-e-Shikwa in 1913. Either way, the same Iqbal suddenly became a religious authority in the eyes of the same ‘scholars’.

Jawab-e-Shikwa pointed out that human beings are partners in influencing the world. According to Iqbal, true Muslims personify khudi (concept of realising selfhood). Thus, anyone who adopts these Muslim qualities is promised proportionate reward. How, then, can anyone who claims to love and know their God be unfamiliar with His principles of justice as an essential part of God’s reality and oneness? Because if they were ever acquainted with these doctrines, they would know their shikwa (grievances) to be completely baseless, and would instead internally assess their condition in the light of this very justice dispensed. He used his poem as an opportunity to remind Muslims of the bounties of the same Higher Powers; God says to approach Him, regardless of us being infidels, egotists, idol worshipers, or however many times we may have reverted from our wrong doings.

Using his poetry to convey his ever-evolving thought process, Iqbal raised significant existential questions: who am I? Why am I here? What is my role in the grand scheme of the universe? Whether or not Iqbal had answers to any of these fundamental questions was probably a separate struggle altogether. The fact that he was even able to raise these concerns shows us that Iqbal was the epitome of intellectual thought. The thinking and the legacy that he left behind holds much vitality, igniting a solid combination of conviction, courage and self-reliance.

As we commemorate Iqbal’s 141st birth anniversary, we must recognise him as one of Pakistan’s topmost intellectual pillars. This is because his philosophy holds as much weight today as it did when he first laid it down, combining man’s spiritual journey through his lifetime, evolving both individually and alongside his community.