To squat or not to squat? 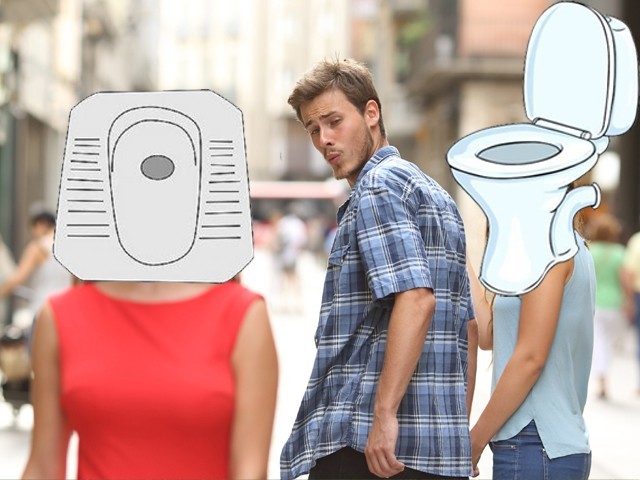 Interestingly enough, new studies show that using a squat toilet may actually be beneficial for our overall health.

I was one-year-old when my family moved from Pakistan to Botswana. Located in Southern Africa, Botswana is about the size of France, with an astonishingly low population of two-and-a-half-million people. We spent most of our time abroad but would often visit home, and at least once a year we visited Karachi, where I was born.

Although it had been a few years since my last visit to Karachi, this is a city that always pulls on my heartstrings, and after spending only a week in the city of dreams, I found myself used to the cultural oddities, such as being yelled at by random strangers, men with kohled eyes staring lecherously at young girls, as well as the beggars, the pollution, the chaotic traffic, and of course, unfortunately – if I can put it politely – the Hershey squirts. However, despite all these wonderful aspects of Karachi, there remains one particular part I still cannot completely come to terms with – the squat toilet.

For those who have never experienced the unique blend of pain and pleasure associated with a squat toilet, rejoice. Many of us have taken for granted the luxury of western toilets, and being able to relieve ourselves without getting a massive thigh and calf workout. However, Southeast Asia virtually invented the phrase ‘no pain no gain’, and nowhere is this more apparent than in the toilet system we use.

Being indigenous to this region, I have long been familiar with the perils of squatting. But I know people here and abroad who refuse to use public restrooms with squat toilets, even in case of an emergency, because the experience simply is not worth it. When you also consider the fact that most of the locks in the stalls of said public restrooms are either missing or broken, the potential for disaster and humiliation is astronomical. I will spare readers the details, but some of the things I have seen have caused irreversible psychological damage.

Comparatively, other cities in Pakistan, such as Islamabad, are somewhat cleaner than our coastal megalopolis, and modernisation has brought with it toilet reform. Shopping malls and mid-to-upscale restaurants are thankfully equipped with the toilets we all know and love, and then some. A restaurant I went to recently had – in place of urinals in the men’s restroom – a glazed glass wall overlooking a bush. Another place I patronised had one of those fully automatic, hands-free style contraptions that you could probably surf the internet on. A welcome change, no doubt, but you have to wonder: is Islamabad losing its disposition?

Just as squat toilets are being replaced by sparkling white toilet bowls, much of the old world charm of the city is being bulldozed to make way for commercial real estate and business. It is a bit of a ‘shame-shame’ really, because like being caned by a strict parent, or arguing with an ex, using a squat toilet is indeed painful. And yet it also helps build character, an annoyingly nebulous concept, and is still considered an integral part of life in Pakistan.

Interestingly enough, new studies show that using a squat toilet may actually be beneficial for our overall health. Researchers now believe squatting can ease constipation, prevent colon disease, and improve pelvic floor issues. In fact, our bodies certainly are not designed for the modern toilets we use. The alimentary canal ends with the rectum, where waste is stored, and the exterior, where it leaves the body. The tube between the two is slightly kinked, which is what allows you to hold it in. Standing up pinches off the passageway, and to a lesser extent, sitting does the same. This is great when there is no rest stop in sight, but when it is time to release, you want the channels clear. The squatting position straightens out the tube, allowing for free flow. This means a lot less straining, which we can all agree is a good thing.

In light of all these benefits, perhaps it is safe to say that squat toilets need not be looked down upon. For all the good and bad memories they hold for me, and for the role they have in our society, I for one will be slightly teary-eyed if one day the last squat toilet is gone. Although truth be told, just like our attitude towards change in general, that is unlikely to happen any time soon.

The author is an educationalist and industrialist in the textile and clothing sector of Botswana (Southern Africa). Born in Pakistan, he is an avid reader and writer of issues big and small.

Dhaba vs fine dining: A $60 meal at a Michelin star restaurant or a $2 meal fit for a Mughal emperor?