As technology advances, so does healthcare in Pakistan – convenient and free, all in the palm of your hand 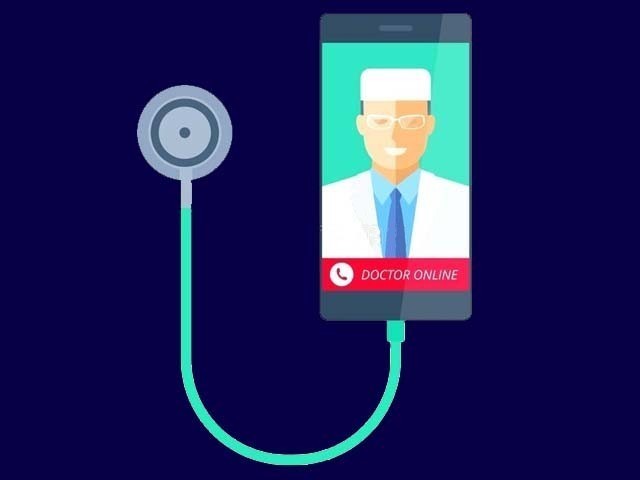 A direct connection between patients and doctors has the potential to change the healthcare landscape in Pakistan. PHOTO: SHUTTERSTOCK

What do you do when your toddler slips and hits their head? Or when someone chokes at the dinner table? Or when you have a severe headache?

Even when we hope that we don’t have to deal with such situations, the reality remains they are quite plausible. Hence it’s important to know what to do if such a situation arises. Be it an emergency or a seemingly small health concern, it’s always good to consult a physician.

Sadly, consulting a doctor isn’t a simple task in a state like Pakistan. With limited medical resources and the rising cost of healthcare, many people choose to avoid a visit to the doctor until it’s absolutely necessary.

In 2015, Pakistan had one physician per 1,000 people, which needless to say is quite low. In addition to this, healthcare services are not easily accessible, particularly in remote regions or during evening hours. Even when they are, a visit to a physician is usually quite heavy on the pocket.

This is where technology can help. While it’s common knowledge that technology is propelling medical advancement on a global level, it is also helping us do something really simple – connect with others.

A direct connection between patients and doctors has the potential to change the healthcare landscape in Pakistan. This is because a large number of people in Pakistan now have access to the internet and mobile devices. According to the World Trade Organisation, smartphone users made up 31% of total mobile users in 2016, and the number is growing with every passing year.

Some Pakistani startups have worked on this simple idea of connectivity and created platforms that are bringing healthcare services to the people, no matter where they are or what time of day it is.

Marham is one such startup that is changing the healthcare industry. It was founded three years ago with the aim to facilitate healthcare in Pakistan. Today, the online platform features a number of offerings ranging from online consultations and appointment bookings to a healthcare forum and home-based services.

Marham has a team of over 12,000 doctors who are serving people across 67 cities in Pakistan. The venture’s efforts were also recognised by Google and it was shortlisted for the Demo Day Asia competition earlier this year.

When discussing healthcare, a valid concern – particularly when it comes to Pakistan – is that many female doctors are unable to practice medicine due to various reasons. Though on average more female doctors graduate from medical schools in Pakistan, the statistics published by the Pakistan Medical and Dental Council for 2018 show that the number of registered male specialists is more than twice the number of registered female specialists.

This market failure is being corrected by doctHERs, a digital healthcare platform that connects female doctors to patients in real-time through online technology. This not only helps female doctors in contributing to the healthcare sector, and consequently the economy, but also helps in taking healthcare services to those who are underserved. Within a short span of time, the initiative has positively impacted 25,000 lives across its network of eight telemedicine centres across Pakistan.

While these initiatives are disrupting the healthcare landscape in Pakistan, another startup, founded by a Pakistani entrepreneur based in Canada, is creating a global impact. Your Doctors Online (YDO) enables people to consult with North American doctors, free of charge.

The platform provides round the clock assistance to individuals seeking medical advice, enabling them to share their questions with qualified doctors over the internet or through the app. In addition to having North American doctors on-board, YDO also has a team of Pakistani female doctors who manage their virtual chats.

Within a span of one year, YDO has helped over 50,000 people across the world, particularly women who are dealing with issues like difficulty in conceiving, problems during pregnancy, and concerns about sexual health.

YDO’s vision for the future is to create a centre of disease control, where cutting-edge technologies like artificial intelligence can be used to generate real-time data on the prevalent health issues in different regions in order to help tackle them. Even though there is still a long way to go, platforms like these are definitely playing a pivotal role in making healthcare more accessible and affordable.

The ultimate goal is to give everyone the reassurance that in case a medical emergency arises, or simply if there is something that doesn’t feel right health-wise, a doctor is always available to give them the support they need and deserve.

The writer is a communications professional who is currently based in Canada. She enjoys writing, exploring other cultures, and spending time with her daughter.' She tweets @erumansarii (twitter.com/erumansarii).