The wobbly ride and chaotic landing of Helicopter Eela 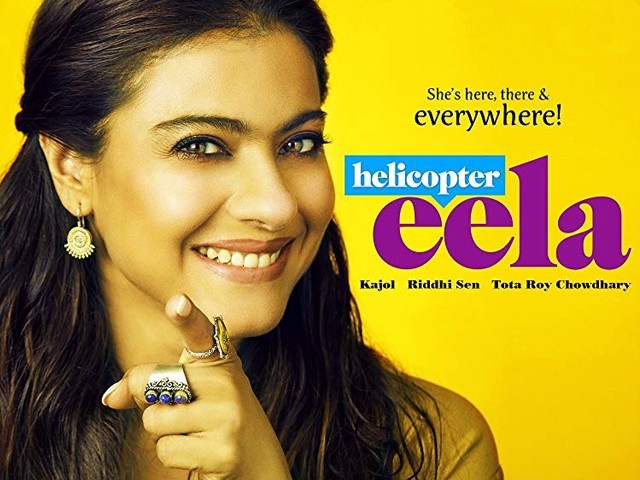 The film is about the awakening of Eela’s individuality and her journey of forced self-discovery. PHOTO: IMDB

Helicopter Eela is a family drama film based on the Gujarati play Beta Kaagdo by Anand Gandhi, and tells the story of an intrusive mother who, much to the disappointment of her son, keeps his life under strict scrutiny.

The film’s plot revolves around Eela (Kajol), a single mother who keeps shadowing her son Vivaan (Riddhi Sen), ensuring her life dominates his own. She gave up on her aspirations of becoming a playback singer for the sake of being there as a parent to her son, but the overprotective nature of her motherhood and the lack of another partner makes her more of a helicopter parent. The frustrated Vivaan struggles to find personal space as his mother keeps revolving around him and hovering over him.

The film is about the awakening of Eela’s individuality and her journey of forced self-discovery. The first half focuses on Eela’s dreams and hopes in the 90s and her love story with her former partner, while the second half concentrates on her relationship with her son. Eela’s overindulgence quickly becomes annoying and suffocating for the viewer as well, as she keeps stalking her son’s social media profiles, listens to his private conversations, and goes to the extent of taking admission in his college. As a result of her constant hovering, the relationship between Eela and Vivaan turns sour.

Helicopter Eela shows a mother in complete contrast to the stereotypical and peripheral roles of parents in Bollywood films, where they are shown to be either aggressively ruthless or extremely sacrificial. On this front, the film comes across as an extremely refreshing experience, as Eela is unlike the stereotypes and has different shades to her character, where she is soothing one minute and stifling the very next.

Despite the refreshing premise of an overbearing parenting style, the film suffers badly at the hands of what can only be described as a poor storyline and dismal plot. The script is scattered and has little to offer, particularly in the first half when we see the love story take place. Despite playing with the themes of a generation gap, shattered dreams, obsessive parenting and self-realisation, the film is long drawn-out and dragged, which significantly reduces its impact. Mitesh Shah and Gandhi’s screenplay is insipid and out of tune, failing to accentuate any significant charm or appeal.

Furthermore, the editing and cinematography are average, while the music clearly misses the mark; ironic given the many musical sequences in the film and Eela’s inclination towards it as well.

The film crosses the boundaries of plausibility, whirring in the circles of overflowing melodrama and succumbing to the typical Bollywood romanticism. Director Pradeep Sarkar’s vapid treatment and banal execution of the material – the film has a dreary beginning and conclusion – result in the wobbly ride and chaotic landing of Helicopter Eela.

Despite the absurdity, inconsistency and incongruity, the film offers some convincing performances by the lead actors. Kajol’s exuberance is infectious, as she honestly portrays the role of a cantankerous mother whose only purpose in life is infiltrating her son’s privacy. Despite her over-the-top acting style, she manages to do a fair job and complements Sen, who impressively brings out the agony of adolescent years. Their warm mother-son equation is natural and compelling, offering some heart-touching moments in a film riding high on emotion. The concept of re-discovering your identity and not giving up on your dreams despite marriage and motherhood putting too much on your plate is an uplifting one, even if the film fails to execute it properly.

The mother-son bond, some heart-warming moments in the narrative and a relatable theme for South Asians makes this film a one-time watch at the very least.