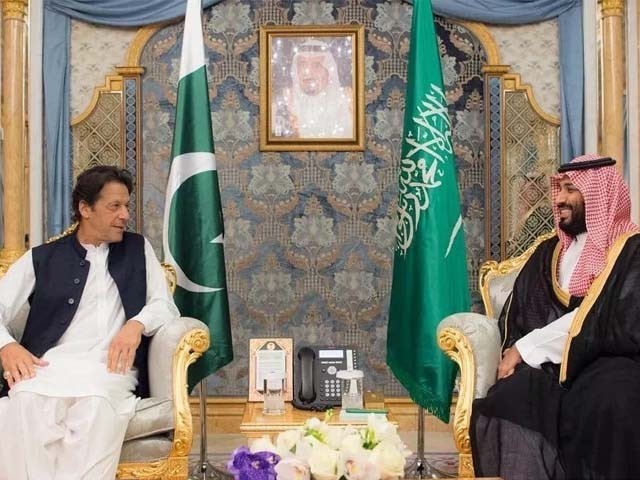 Just like the calls against the CPEC having a colonial agenda, now there are calls that the Saudis have the same agenda in Pakistan. PHOTO: TWITTER/ PTI OFFICIAL

Earlier this year, when the election campaign in Pakistan was running at fever pitch, I found myself listening to an old classic by The Who. The song was Won’t Get Fooled Again and the line that got me pondering was “meet the old boss, same as the new boss”. I shuddered when I heard this line while watching parties push their candidates. It was literal horse-trading as politicians scrambled to capture the number of seats required to secure the government for themselves.

We are barely a few months into the new government and people are already questioning and debating the current government’s decisions. For example, take the matter of the Saudi government pledging to set up an oil refinery in Gwadar.

Pakistan’s economy is in dire straits, there is no question about it. Government after government has saddled the country with insurmountable debts. There is no transparency in how much we owe to whom. Even the China-Pakistan Economic Corridor (CPEC), while beneficial, is becoming a black-box of where and how it is being implemented. The difference is, CPEC is largely being driven by the Chinese therefore there is some visibility, be it by the optics of motorways popping up all over Pakistan, the increasing presence of Chinese in Pakistan or even by the daily supplements about CPEC projects in national newspapers.

The new government, like all the previous governments, has realised that to make any sort of headway, they need spending power. Unfortunately, they have also realised that Pakistan has next to nothing in its national coffers and is running on air. As such, we saw the finance teams running around to our allies in the global community looking for funds to sustain the country. During these efforts, Saudi Arabia stepped up to the plate and pledged to help Pakistan by agreeing to set up an oil refinery in Gwadar. The eventual goal of this oil refinery is to lower Pakistan’s crude oil bill by allowing it to refine oil within its borders.

The only brush with colonialism that South Asia has had was when we were ruled by the British. That came about because the British gradually increased their military presence in India under the guise of protecting their business interests. They also sweet-talked their way into being the most trusted advisors of the ruling royalty. This virtually gave them the opportunity to influence policy decisions.

But will the situation unfold the same way for Pakistan? It is highly doubtful that it would and there are many reasons why that is so.

Secondly, there is the case of being beholden to Saudi debt. We are already in too deep when it comes to CPEC projects. The fear is we will end up spending years in paying off the cost of this refinery. However, this is still better than an outright loan from Saudi Arabia. By setting up a multi-billion dollar refinery, the Saudi’s are paying for a piece of infrastructure instead of providing a cash handout. This is also better because a cash handout comes with conditions such as setting up a more Saudi Wahabi agenda in our basic education system.

Thirdly, Saudis are fighting their own economic battles. The Saudi Crown Prince Muhammad bin Salman has embarked on a modernisation initiative where he is trying to open Saudi Arabia for business. While the campaigning for this venture has been slick and glossy, it leaves the Kingdom with much less capital to invest into other countries. In addition, Saudi Arabia is still neck deep in funding conflict in Syria and isolating Qatar. This has spooked many of the investors that had expressed interest in the Crown Prince’s liberalisation vision and pulled back their investment.

Fourthly, a country is taken over when foreign powers seep into policy-making positions. I believe that the current crop of leaders in Pakistan are too new to be perceived as puppets of foreign governments. Even previous governments, while being a bit partial to some governments, cannot be categorised as puppets. Puppets could be countries like Saudi Arabia as a puppet of the US or Syria being a puppet of Russia.

Lastly, Pakistan is not in a condition to be taken over. Our economy is a mess, our population is uneducated, our infrastructure is dilapidated and our politics is trapped in a feudal mindset. Fixing Pakistan is not an overnight task and neither is it for the fainthearted. There are too many problems and too many road blocks. Why would Saudi Arabia take over such a daunting challenge?

At the end of the day, it is not easy to ‘take over’ a country. Gone are the days when a country could roll into another country with tanks blazing. There are too many alliances and non-government monitoring agencies that serve as diplomatic barriers to outright war. With Pakistan, there is the additional spectre of nuclear weapons. Anybody wishing to take over Pakistan needs to be twice as careful. Pakistan needs to gets its economy in order though, otherwise it will continue to slide deeper and deeper into unsustainable debt and remain at the mercy of foreign powers.