Sakina’s soul is calling for justice, but is Pakistan listening? 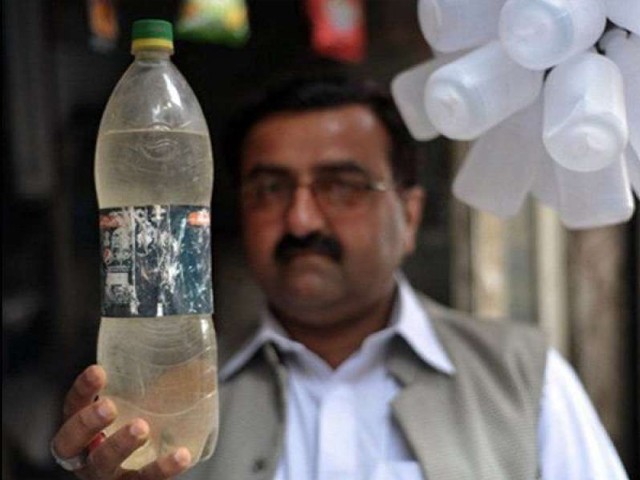 Mureed Abbas, field officer of Acid Survivors Foundation, holds a bottle of acid for sale at a shop for 40 Pakistan rupees. PHOTO: AFP

Would it be true to suggest that only the mighty can get justice in Pakistan, or just another misnomer? No matter what side of the argument you support, it is undeniable that this is a question of wide importance in a country such as ours.

On September 13, 2018, a brutal crime was committed in the Chak 92 JB area of Gojra. A man called Safdar, with the help of an accomplice, threw acid on a sleeping family out of revenge. The ferocity of the attack did not stop at this; they viciously poured acid into Sakina Bibi’s mouth and forced her to gulp it down, which is why she could not survive longer than six hours as the entirety of her body was burnt. Her husband lost his eyesight permanently, while two of their sons suffered severe skin damage. Their daughter was sleeping in her room while the rest of the family slept outside, and thus luckily managed to remain unhurt.

A few days before this ruthless crime, the accused reportedly molested Sakina’s teenage daughter. Seeking justice, Sakina decided to report the incident to the police. However, owing to excessive aggression by Safdar and undue pressure from the village elders to come to a settlement, she decided not to report the incident on two conditions. The first was to banish Safdar from the village for six months, and in case of his early return, the second was that she would pursue a legal battle against him.

The accused did return early, only to commit this barbaric crime for revenge. From that day to present day, this case has gone nowhere. Mainly because our criminal justice system is accustomed to pursuing cases only after a judicial suo motu – seen in many cases recently – and Sakina’s case failed to garner sufficient media hype, which has set the legal norm for justice in this country. What this case does, however, is raise some important concerns regarding the criminal investigation system in Pakistan.

Although the Gojra Sadar Police Station initially registered a First Information Report (FIR) and arrested the accused – at least that is what the police claim – no further progress has been reported in the case. The right to information is a fundamental right provided to the victim’s family, but the same is being denied on the pretext of the sensitivity of the matter. The police are treating media knowledge of the case as Res Sub Judice (a case under judgment and thus forbidden from public discussion), which is a steep insult of legal provisions.

Moreover, police behaviour towards the victim’s family has been indifferent and non-cooperative, increasing their sense of helplessness. The state is not only dodging its compulsory obligation to deliver justice, but is also leaving the people high and dry.

Prima facie, the police did not take notice of the sexual harassment and molestation of the teenage girl in their FIR. The offence of breaking into Sakina’s house at night as well as the damage to the property was altogether overlooked. This deliberate ignorance of pertinent details shows an acute unprofessionalism on the part of the police, contrary to the official claims. How can a court reach the conclusion of the case and deliver a fair judgement without considering the entire description of the events? The incidents left out were important for the transition of the case, and their evasion is a matter of grave concern.

Another important point of unease and concern is how easily the accused got access to the acid, with no ban in sight when it comes to the sale of loose acid. Not only is acid a dangerous substance, it is a lethal weapon, particularly in our society and specifically against women. Safdar’s method of killing Sakina is in line with the high scale of violence against women found in Pakistan, as 80% acid crimes are reported against women, and annually hundreds of women are killed by acid attacks in Pakistan. Even in this cruel case, no action or investigation has been opened up against the seller of this hazardous material. Criminal law prescribes equivalent punishment for whoever aids or abets the criminal. Then how can the supplier – an accessory to the murder – be ignored altogether?

It is undeniable that the police have failed, or rather simply did not bother, to connect essential circumstances and gather evidence for this case. If they did, they would have questioned the “authority” under which Sakina was stopped from lodging an FIR in the first place. If Sakina had registered a case before the police herself, she may not have been mercilessly killed had the police taken action instead of the accused simply being banished by village elders. If the forceful settlement by the village elders had been averted, there may not have been a second crime altogether.

Justice delayed is justice denied. The modus operandi of this investigation is seriously doubtful, as the police continuously avert disclosing any progress of the case to either the victim’s family or to the legal counsel. Although the accused was arrested immediately after the crime, neither was a charge filed against him despite Sakina recording a dying declaration, nor have the police presented him before the court. Instead, one police officer tried to convince the family to let the case go and settle with the accused party, suggesting there was no way they could fight the accused and emerge victorious. Their pace is thus not only complicating the case but casting serious doubts over their performance, making this a gross violation of fundamental rights that must not go unchecked.

No matter how rich or poor the country, the provision of justice is a state imperative, for no private investigation agency exists to investigate injustices, making it incumbent upon the state to take notice of the system’s discrepancies. But justice is nowhere in sight for Sakina or her family. Sakina was not timid, but our system forced her to surrender. If the system continues to ignore those desperate for justice for long, it will be hard to recover public trust, which is deteriorating by the day.

The urgency of this case cannot be denied. Yes, Sakina’s case is nowhere near an exception in our society, but justice must be served to set a precedent. Otherwise, this state will continue to face constant embarrassment before the international community as we fail to provide our people with basic human rights. A recent report indicates that Pakistan is one of the worst countries with respect to gender equality. Women face constant discrimination and injustice in their daily lives, and we fail to deliver them justice after their death as well. But Sakina’s soul continues to call for justice to whoever is listening, and hopefully, her call will not be suppressed any longer.

The author is a lawyer by profession, and tweets @AsadAmeer141 (twitter.com/AsadAmeer141)