Mango mania in the US 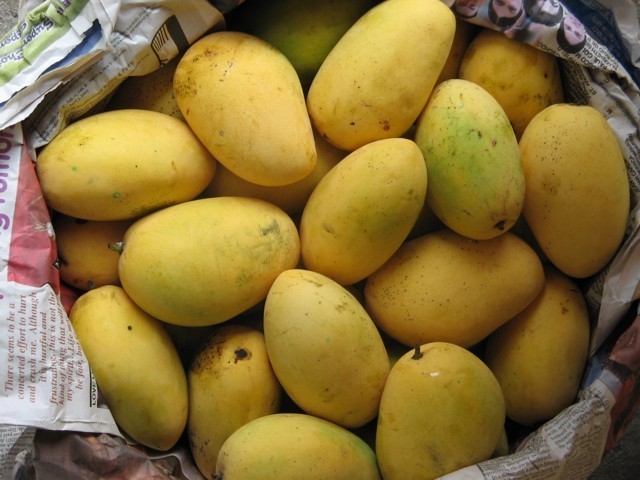 Mangoes, the love of Mirza Ghalib’s life, the king of fruit, and the object of many a Pakistanis’ desire, finally landed for the first time in Chicago.

After a quick trip to the facility for chemical treatment, the mangoes, boxed up in cartons bearing the US and Pakistan flags, were wheeled into the ballroom of the Hilton, where the Pakistan Embassy held an inaugural event to “introduce the mangoes to the United States”.

The event started off trying to be a less classy version of a J&S event and ended up being a wedding.

Women from the Pakistani community, clad in their finest, exchanged gossip over mangoes, while men debated foreign policy, business and their two cents on Pakistan, while cradling ‘chaunsas’ that were on display. A green and white cake was wheeled out towards the end, for Ambassador Hussain Haqqani and his wife Presidential spokesperson Farahnaz Ispahani to cut.

The mangoes themselves were a delight to behold and were presented with the Government of Pakistan insignia in the form of an ice sculpture. While the sculpture did not melt (which would’ve been highly ironic) – the mangoes and different mango desserts presented did melt in many a mouth, even if some sniggered that the mangoes did not seem to be wholly Pakistani and were mixed in with another kind.

According to Ambassador Haqqani and various embassy officials who’ve been working on getting Pakistani mangoes to the US, they had to get through 78 steps and two years, before they finally saw one land here. In a sense, said one official, we’re trailblazers, so now anyone who wants to import mangoes, can. Yet, to the best of one’s knowledge, the formalities haven’t been completed yet, so there is no time frame available of when, and maybe even if Pakistani mangoes will be available in the US. Given the high costs and the market flooded with cheaper Mexican mangoes, it really is a gamble whether the love of Ghalib’s life, will ever find a home in the US.

A correspondent for The Express Tribune based in Washington DC

What the NATO Summit achieved

My trip to Guantanamo Bay