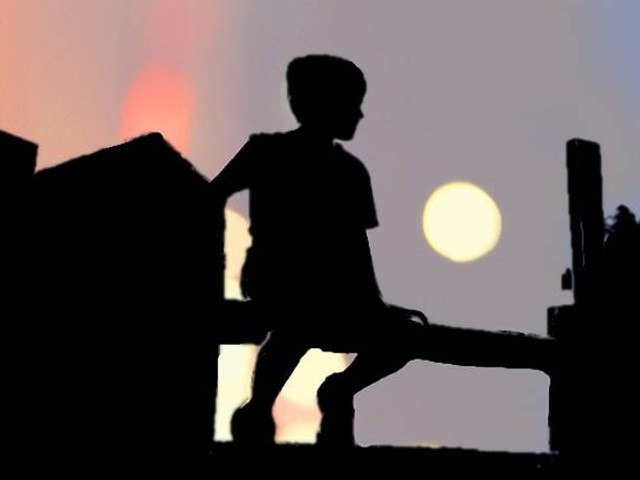 His eyes are still staring at the dirt road, fixed where his Baba had stopped briefly before disappearing. PHOTO: ISTOCK

This boy. He has refused to grow up. He is still stuck in the 80s in that small village of central Punjab. There. He is five and stubborn, still sitting on one of the two identical stones dug at the base of the haveli’s gigantic wooden gate’s posts. He seems to have become one with the stone. In 30 years, he has not moved; he has become immovable like the neem tree (Indian lilac) in the courtyard of the haveli.

His Baba left this morning for Gilgit to join his unit there after a month-long leave. He saw him leaving in his military uniform treading the dirt road leading out of the village, briefly stopping at the far winding end to look at him and wave.

“I am going to ride on his shoulders when Baba comes back in the evening.”

There is this smile of conviction on his face which is going to fade and disappear somewhere near the sunset. But the day is going to be long. It is just seven in the morning and the sun is starting to shine bright like his eyes filled with hope.

The dirt road is empty now. It is not leading anyone in… his Baba too… at least not yet.

He is high on the 30 days of complete bliss and joy where nobody was allowed to order him or scold him for chasing frogs after a rainy evening or blame him of nastiness for breaking his mother’s favourite china pots. Baba fixed everything. For once, there was nothing that couldn’t be resolved amicably. The world had finally discovered its orbit around him. It could not move at its will anymore not even when his grandmother would tell his father that he was spoiling him.

He is yet to learn that all the glory and bliss comes to an end; I wonder if he is interested at all in learning such stoic wisdom.

But he is interested in the empty dirt road. It has seized his undivided gaze.

The bullcarts laden with hay, green fodder and sugarcane have started to return to the village. Groups of women pass by him heading towards fields with lunch for the farmers. It is already midday. The sun has slowly moved over his head. The children are still playing under the oak tree beside the winding road. His mother calls him from behind the gigantic gate to come home.

“I am waiting for Baba.”

His defiance is louder than his voice. No one can make him surrender his fort. The gigantic gate between them cannot be conquered.

“But Baba is not coming back today.”

“No. He did not. But I know he will come back. That’s why I am waiting for him. Didn’t he come back yesterday?”

The howl in his voice betrays no fear. He is full of conviction. His eyes are still staring at the dirt road, fixed where his Baba had stopped briefly before disappearing. The flight of his imagination, however, has transcended the barriers of the winding road and houses, and he can see Baba at the post office withdrawing his salary like they did when he went with him last time.

“What time did Baba come home yesterday from the city with your presents?”

“Yes, I do. So he will come back in the evening. You should come home, eat your lunch and wait afterwards. There is a lot of time for it to  be evening yet.”

“What if I go in for lunch and he comes back? How would I know?”

“He will knock at the gate when he returns home.”

“No, but I want to see him coming home first. Here.”

“Okay, I shall ask Moosa to wait here for you and call you when your Baba comes back.”

The lunch was brief. His aunts were smiling at him. His grandmother told him to stay in the haveli and rest in the charpoy under the neem tree. The old order was returning. He felt surrounded.

“I shall see them all when Baba comes back.”

His mother gave him a bath and put him in the charpoy under the neem tree.

The gigantic wooden gate is shut and bolted. He knows it is too early for a knock. But he is waiting. He turns on his side to keep the gate in his gaze. His mother and aunts have also come to rest under the neem tree.

“Why are you looking at the gate?” his youngest aunt pestered.

“I am waiting for my Baba.”

They all laugh. His grandmother tells them not to bother him. He likes his daadi (paternal grandmother)

He squared his facts.

He turns again to lie straight on his back. The tree is spread wide with its splendid branches. There are some crows and mynas resting. He does not see any bird’s nest in the tree. There is none. He is surprised. He does not know that neem is an anti-bird’s nest tree. Silence has muffed everything; nothing seems to breathe. The women have lied down to rest too.

The haveli comes back to life again in the afternoon. His chacha (paternal grandfather) and dada abu (paternal grandfather) have returned from the fields. The gate is opened. The buffaloes and cows are happily eating. He walks to Baba’s favourite bull. He knows it would not harm him. The bull sniffs him and brings its head down near his. He caresses him on the forehead.

“Don’t be sad. Baba will come back home soon.”

The sun is on its way down and he is sitting on the stone again… looking at the dirt road. Most farmers have returned to their homes. A few are still coming back with their yokes of bulls exhausted due to ploughing. The sun has set. The children are already playing hide and seek. The road has started to vanish in the darkness of dusk.

Dada abu has come looking for him.

“What are you doing here?”

He looks up, opens his mouth but his voice gets lost somewhere in his throat. He looks back at the gradually dying road. There is no one. Dada abu sits on his feet.

“I am waiting for Baba.”

Dada abu takes him in his embrace. They keep sitting there for a while. Holding each other close. Silent. Tears are rolling down his eyes. But I surmise it is not just him weeping.

He is lying in his charpoy in the courtyard under the blue sky embroidered with stars. Dada abu has promised him that he will unbolt the gate for him when Baba knocks at it. He looks away from the stars, turns in his charpoy with the gigantic indifferent wooden gate in his sight.

(The title is taken from Charles Bukowski’s poem Bluebird)