Because ‘court is no place for women’ 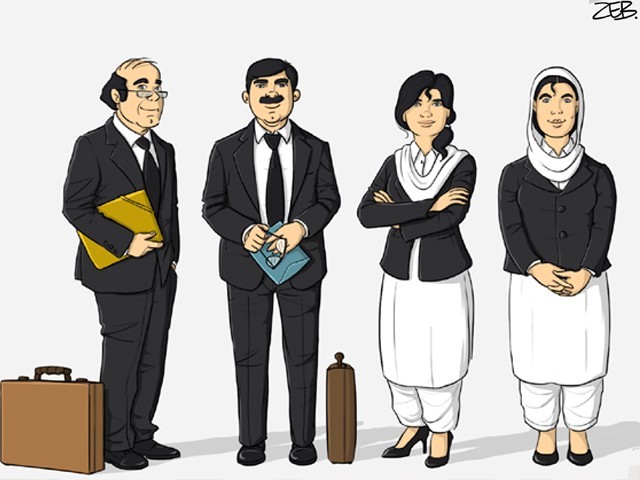 For most female legal practitioners in Pakistan, sexism and misogyny are an unavoidable occupational hazard. It usually begins during their very first job interview when they are asked questions that no male employee is asked and are actively discouraged from pursuing a career that they have worked hard to earn a degree in.

“We don’t encourage women to go to court,” is what a partner at one of the biggest law firms in Lahore told a female colleague of mine during a job interview. You could be the most eloquent orator that this country has ever seen, and they’d still question if a woman could hold her own in court. This is where sexism usually begins for women in the legal profession. Sadly, it is not where it ends.

It grows, like an obstinate weed, enfolding our entire legal system. In the lower courts, women are subjected to constant harassment, with leering stares being the least of their problems. I have spoken to countless female lawyers who have recounted incidents where male lawyers made sexual remarks as they walked through the dilapidated building that functions as the home for our trial courts. Male lawyers routinely belittle female lawyers arguing in court by making jokes about their gender, with even the judges sometimes chiming in. Patriarchy then proceeds to chuckle together.

Sexism has seeped into our jurisprudence, where there have been countless judgements that have displayed misogyny and sexism in the language employed to describe the behaviour of women. If an example is needed one can simply turn to the recent judgment by the Lahore High Court in the Khadija Siddiqui case. Regardless of the guilt or innocence of the accused, the judgment was remarkable in its casual use of sexist language in describing the female victim.

The Punjab Bar Council publishes an official diary every year without incident, but this year, one of the pages carried a sexist quotation (quoted from where, still remains a mystery). Here was the regulatory body of the legal profession in Punjab publishing a quote that can be translated as saying:

“A society that gives its women more rights than necessary will eventually come to regret it.”

This is a quote from the official diary of the Punjab Bar Council. The casual sexism and misogyny that female lawyers in Pakistan face is on display. All such quotes should be removed at once. pic.twitter.com/fwSzkrbXGE

This is no casual sexism, this is a statement asking for the denial of rights – rights guaranteed by the Constitution of this country – to women. It is a statement relegating women to a lower category of citizenship, one where you are given some rights, but not too many. God forbid if women were given too many rights, they would never be able to bear such great responsibility! Imagine women having freedom of speech, expression and thought! The freedom to mould their lives according to their unique individuality rather than how men believe it should be shaped. Such thoughts terrify the male-dominated legal profession – and they terrify the Punjab Bar Council.

The Punjab Bar Council could have redeemed itself; there was the genuine possibility that this wasn’t a deliberate act on their part, and certain members such as Rana Intezar promptly informed the Lahore High Court Gender Equality and Diversity Committee (a committee in which I am co-chairperson, along with the talented Nida Usman Chaudhry) that such a statement was unacceptable.

However, the chairperson of the Punjab Bar Council Executive Committee would thoroughly disappoint. Her first reaction was that this was sheer ‘propaganda’ and that the Punjab Bar Council couldn’t be sexist; her stance then changed, and in a shocking turn of events she would write a letter to the Council of Islamic Ideology (CII) asking them whether the sexist quote should be removed. The fact that the removal of a mere quote resulted in the Punjab Bar Council asking the CII for help says more about their commitment to working towards the rights of women than any amount of words could. 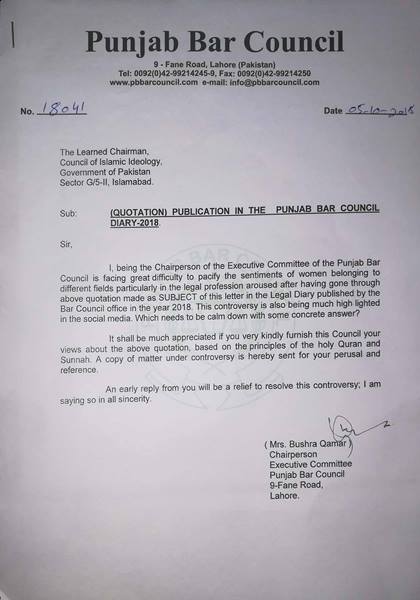 The CII has always shown itself to be prejudiced against women, with the majority of its decisions showing an explicit animus towards the rights of women. To ask them for their opinion on the quotation in question is akin to asking Donald Trump how his presidency is going. We all know the ignorant answer. All this is without prejudice to the fact that only the federal or provincial government can refer a matter to the CII under the Constitution.

On an issue where it could have taken a stand, the Punjab Bar Council has abdicated its responsibility. The fact that such quotations deserve no place in official publications shouldn’t even have been a contentious point to begin with. Publishing such sexist quotes in official documentation strikes at the very core of the Constitution’s guarantee of human dignity. In short, the Constitution mandates every citizen of this country – whether male or female – to be treated with equal dignity. This right, guaranteed in Article 14 of the Constitution, is the only fundamental right that is not subject to any restriction. So, no authority, not the federal government, not the provincial government, and certainly not the Punjab Bar Council can rob women of their dignity.

However, by endorsing sexist quotes that advocate for the restriction of basic liberties for women, the Punjab Bar Council endorses the view that women do not deserve the same dignity and respect as men, because they do not deserve the same rights as men. Will our country suddenly begin a downward spiral towards moral decay if women are given their rights? For those who support the sexist statement in the Punjab Bar Council’s official publication, it certainly seems so. This is the tragedy of our society: while the rest of the world is raising its voice for more women rights, we are arguing over whether they should be given rights in the first place.

As female lawyers in #Pakistan, we fight unnecessary battles on every front daily. The least we can expect from the Punjab Bar Council/institutions that supposedly exist to protect us & our rights is to not spew damaging misogynist narratives that take us back a thousand years. pic.twitter.com/9RDAUvX74Y

These problems cannot be swept under the rug; they need to be addressed through a campaign that seeks to create a more inclusive space for women in the legal profession. It requires female lawyers and those who believe in the rights of women to raise their voices against even the most minor instances of sexism. It requires the judiciary, lawyers and especially members of the bar councils of each province to understand that women’s rights are human rights. This cannot be achieved without creating a more diverse legal profession. When the legal profession lost Asma Jahangir, it was the young aspiring female lawyers who suffered the most. They lost an inspiration, they lost a leader. Who would speak for them now? The lack of a female voice eventually results in casual sexism roaming free.

If this is the state of the Punjab Bar Council and the opinion of the sexist men who belong to it, then I shudder to think what kind of treatment and equal justice women who take actual cases to court end up finding. #genderequality #ruleoflaw #Punjab https://t.co/u6p8ZUP3h9

First one is Punjab Bar council, another one is Punjab govt twitter handle. Both images well depict the state of power structures around 50% of this country’s population i.e women. #misogyny #Sexism #harassment pic.twitter.com/13Qq5LG0RL

Our task is not easy, nor have we ever been under any misconception that it was going to be. But backed by a brilliant team of lawyers that make up our committee, we hope to do the best we can. No longer will such statements be allowed in official publication without us raising our voice in opposition. In the era of #MeToo, there should no longer be any space for sexism to grow any further.