The stone crushers of Taxila: Are we ready to lose pieces of our history and heritage? 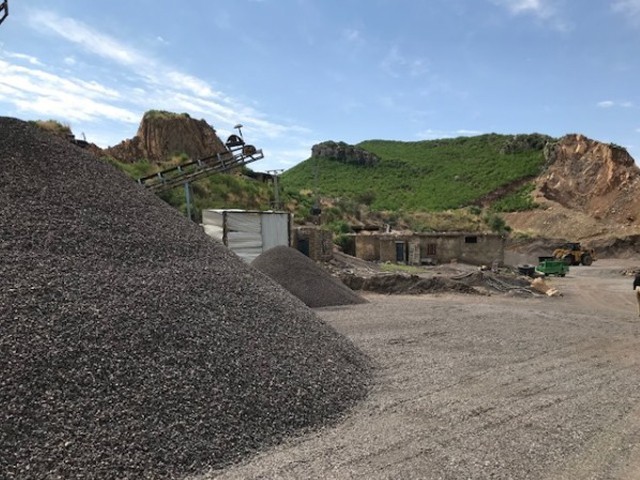 There were, however, large heaps of fresh gravel lying near the machines, so clearly stone crushing was still taking place. PHOTO: RINA SAEED KHAN

Taxila valley, which lies just beyond the Margalla Hills bordering Islamabad, is a picturesque, rural place with sleepy villages nestled below its green hills. Located less than an hour’s drive from Islamabad, the area is famous for Khanpur Dam and a series of archaeological remains which were declared as world heritage sites by United Nations Educational, Scientific and Cultural Organisation (UNESCO) back in 1980. Ideally, Taxila should be preserved as a tourist destination steeped in history, but over the years, stone crushers (a machine used to break down large rocks into smaller rocks, gravel or rock dust) have been steadily eating into its verdant landscape.

The high quality limestone rocks of these hills, a part of the Margalla range, are crushed into gravel to mix in concrete and are widely used in the construction of roads. On a recent journalists’ trip to Taxila, which was organised by the Heinrich Boll Foundation, we set off from Islamabad to see for ourselves the havoc wrought by the stone crushers of Taxila.

Once we entered Taxila from main GT Road, we did not have to go far before we witnessed the horrific sight. Several of the hills we passed looked like they were being attacked by termites – large, dusty cavities had appeared at the foot of these green hills. Upon reaching Peeranwala village near Khanpur Lake, we stopped at a government high school for girls which had been badly affected by the mining process of blasting, wherein controlled explosives are used to break rocks. They were blasting limestone on the hill adjacent to the school. The principal told us how the entire building would shake as if an earthquake had occurred and stones from blasting would fly into school grounds. After the villagers complained to the district commissioner in Haripur, the quarry operators changed the timings to after school hours. 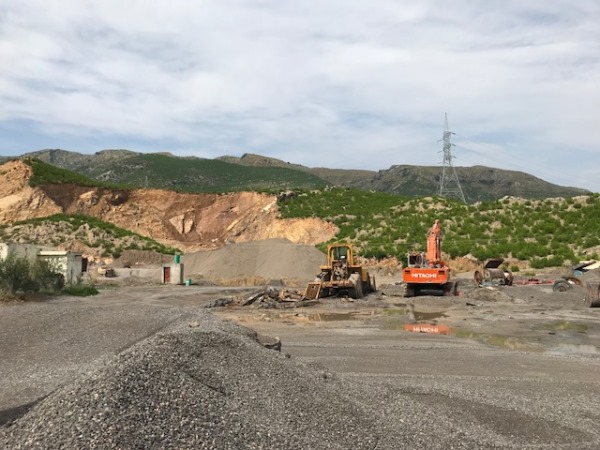 The quarrying site near Peeranwala.

Walid, a local resident who has been fighting in court since 2007 to try and stop this process of blasting, told us:

“We estimate that there are more than 250 crush machines here. And they are blasting less than 100 meters from our homes in this village. That is against mining rules. We keep going to the courts to stop them and even got a stay order from the Peshawar High Court. Yet they keep on operating.”

The villagers complain that aside from the cracks in their homes, there is a permanent haze of dust in the air that is causing allergies and asthma. They say authorities just turn a blind eye, as the people in the stone crushing business make a lot of money. However, the confusion still remains as to whether quarrying (extracting stones from a quarry) in this area is illegal or not as Khanpur lies in Khyber Pakhtunkwa (K-P) where the Supreme Court slapped a complete ban on unlicensed mining in January 2018. 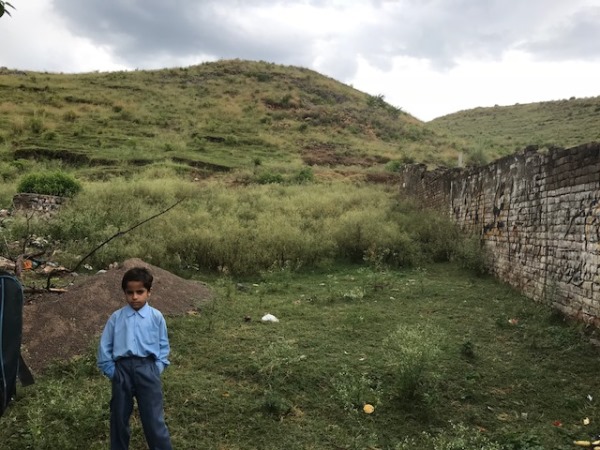 Stones from the blasting behind this hill fall into schools and people’s homes.

After visiting the school, we headed to the quarry that was located just up the road to check if they had the required license. However, we found the quarry to be abandoned, with not a worker in sight.

“They heard of your visit and all of them have run away to hide,” the local villagers who accompanied us to the quarry informed us.

The large machines were lying idle and the temporary offices appeared to be locked. There were, however, large heaps of fresh gravel near the machines, indicating that stone crushing was clearly still taking place. 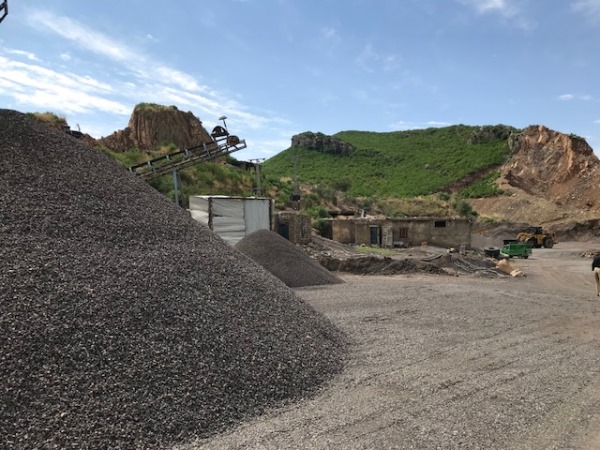 A large heap of gravel waiting to be taken to the cement plant.

When I later spoke to the director general of the Environment Protection Agency, Dr Muhammed Bashir, he informed me that mining is allowed in this area as long as they have proper licenses.

“This area in Taxila is outside the Margalla Hills National Park and its buffer zone, where mining has been banned by the Supreme Court of Pakistan. Licenses are granted with certain conditions and they have permission to mine the limestone here.”

However, he agreed that crushing machines and mining are not allowed within 100 meters of populated areas.

Exploring further, we set off for the Taxila Museum, a lovely colonial era building which was built by the British in 1928. As one of the most visited tourist sites in Pakistan today, Taxila contains the remains of different cultures and religions from Mesolithic era to Medieval era. Humaira Naz, who is the assistant curator at Taxila Museum, told me:

“UNESCO has declared just 18 sites, which are spread out across the Taxila valley. However, we think there are hundreds more.”

With its high wooden ceilings and glass cabinets full of artefacts, the museum has been well preserved over the years. It was founded by British archaeologist Sir John Marshall, who spent some 20 years excavating at Taxila.

Naz says the main threats to Taxila are from humans.

“The local villagers send in their cattle for grazing at the sites; there have also been encroachments on some of the sites as farmers build homes near the archaeological remains. Then you have the stone crushers who are cutting into the mountains. We think there are over a thousand stone crushing units in Taxila valley, destroying its landscape.”

The archaeological remains are all protected antiquity in terms of the Antiquities Act 1975, passed by the Parliament of Pakistan.

“We have declared a red zone around the sites and no quarrying is allowed there whatsoever, but the quarrying continues in the buffer zone where it is also banned. Our museum department is constantly going to court to try to stop it. The problem is that enforcement of law is very weak in Pakistan. Courts take so many years to decide these matters. Also the owners of these stone crushing units are influential people. The government of Pakistan needs to take this threat seriously.” 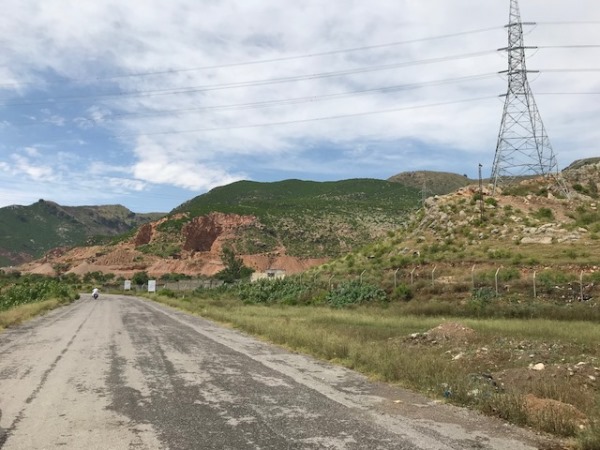 Entire hillsides are being eaten up because of the quarrying and stone crushing.

The mining and quarrying problem actually extends to the entire limestone-rich Margalla Hills which lies in the jurisdiction of the federal capital and both the Punjab and K-P governments. Today, quarrying has been halted around the Margalla Hills National Park in Islamabad, but it is mostly carried out on the western side of Margalla Hills in the Taxila tehsil of Punjab. Bhallar Stupa located on a hilltop in Taxila is one such site. I was shocked to see mining and crushing being carried out right behind this designated world heritage site. Mining exposes the soil surface and thereby enhances the chances of land erosion. 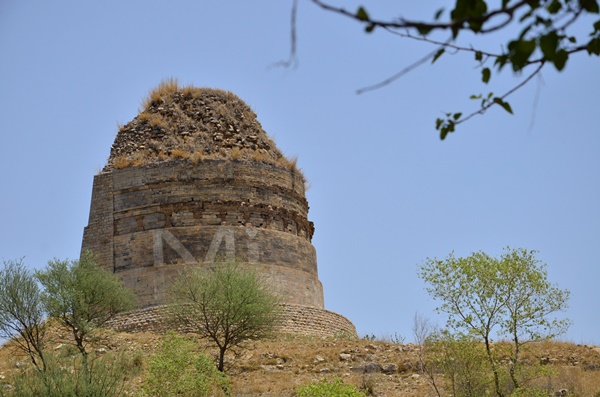 The ancient Bhallar Stupa dates back from fifth century BC to second century AD, when this area was an important Buddhist centre for learning called the Gandhara civilisation. There are no caretakers or any fencing present. In fact, it is not fully round and looks like it was cut in half. It was damaged by the British who must have been searching for relics that are often buried inside a Stupa. Today, however, its main threat comes from the nearby stone quarry, which is cutting into the hill behind it. From the main road, I could see the dust rising from trucks that are constantly taking crushed stones from the quarry to the large cement factory nearby. 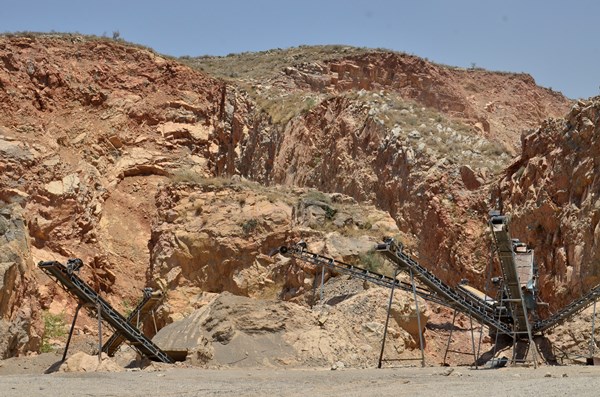 The quarrying going on behind the Stupa. 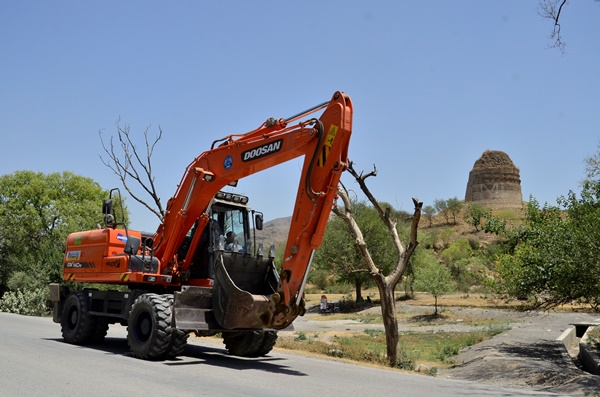 Tractor crane going by the Stupa, which lies near a cement plant.

The quarrying being done in Taxila is clearly threatening its unique archaeology and special ecology and should be stopped at any cost. Surely there are other limestone-rich sites in Pakistan that can provide for cement plants. The mining and crushing of Margalla Hills should be phased out before another decade goes by and the landscape is irreversibly damaged.