Norway attacks: We will rise above through friendship and love 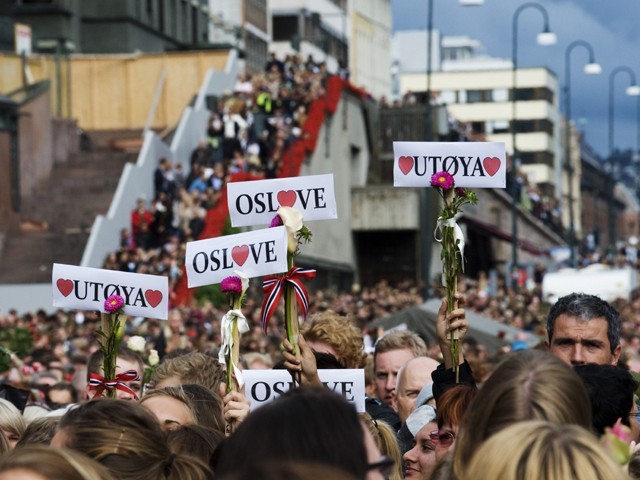 People hold a sign with love for Utoeya and Oslo as thousands of people massed outside Oslo's City Hall on July 25, 2011 in memory of the victims of last week's twin attacks. PHOTO: AFP

There is not a single day when we do not hear news of violence in Pakistan. Our country has been a survivor of terrorism since long. Thousands of children, women, and men have been killed; thousand of our soldiers have embraced martyrdom; and thousands of Pakistani citizens have been wounded in various acts of barbarism. So, while we are thousands of miles apart, we can still feel the sting of the Norwegian masses.

Sufferings and sorrows of those in Norway and Pakistan are the same today. As we heal the wounds of our citizens, we are also sympathising with the people of Norway. From across the world, Pakistanis are sending their sentiments of shock and strong condemnations to Norway. There is respect, care and deep thoughts from the people, irrespective of their faith, colour, culture and language.

Much to the disappointment of the perpetrator of the horrendous crimes in Oslo and Utoya, today mankind has come together more than ever before. Perhaps, the mass murderer forgot that he can never make his hate ideology heard with force; he also forgot that by pushing his fascist agenda by force, he could only invite the force of love to spread around, not only in his country, but all over the world.

As one of the Norwegian young girls who escaped the bullets at the convention beautifully puts:

“If one man can show this much hate, imagine how much love we can show together.”

However, after the twin attack in Norway, there is a new argument that has hit the air waves: should Anders Behring Breivik be called a conservative Christian, fundamentalist Christian or a terrorist Christian?

What prefix would have been used if Anders were from a Muslim background?

What would have been the situation of our world had that been the case?

In any case, the horrific incidents in Norway has made us all clear that be it any one, from any faith and anywhere, we will never tolerate such dreadful acts.

One of my professors who extensively travels to Norway writes:

“I strongly believe that the tragic crime committed by such a sick mind will only make the Norwegian people stronger and more determined to preserve and nurture the ideals and values of inclusiveness, democracy and respect for diversity on which the Norwegian welfare state is founded.

I also believe that the tragedy in Norway is a clear wake-up call to Europe and to the whole world to reflect on and seriously combat the growing virus of xenophobia, demonisation and scapegoating of minorities, war-refugees and other immigrants.

The post 9/11 “normalization” of hate speech and abuse of freedom of expression to attack other people with different cultural and religious backgrounds can lead crazy groups and individuals down the deadly path of the Utoya and Oslo butcher.”

As we communicate words of condemnation and condolences to those who we know in Norway, we are also getting replies of thanks. One such message that I just received is from the Norwegian journalist friend who writes:

“Thank you for caring and showing your support, it means a lot to me and the rest of Norway. I was a member and a regional leader of the youth party that was hit, and I was at this island summer camp some years ago. So, I know many people who were there, so now I am waiting for names of the killed to be released.

This murderer did this because the party speaks for tolerance, that all religions should be respected, and for ethnic diversity in Norway. He hates Muslims and Islam, and people from different backgrounds interacting and getting to know each other. All his bullets were aimed at people like me and you, and what we believe in.

He targeted this youth party because he means we are traitors towards Norway, facilitating “Islamist cancer” to be spread and take over all of Norway. He hates Islam, and wants it to be forbidden in Norway and Europe, and fears that an Islamic take over will come soon. And, thus he goes on and slaughters 84 youth gathered to speak of tolerance, respect, diversity and openness to all religions.

Our prime minister also said some very wise words: “We shall greet this action with more openness and more democracy and more humaneness.”

Again, thanks for caring; it means a lot in these times, to feel that the fight for openness, tolerance and respect of all religious believes never shall falter.”

I was greatly touched with his message and it only strengthened my resolve that we will rise above through friendship and love. These acts of hatred will never deter us in any way and will continue to build the bridges of peace and friendship.

A student of Crossing Border Global Studies in Denmark who is also the Youth Ambassador of Pakistan and a certified trainer of School of Leadership (SOL) Karachi, National Focal Pakistan for UNICEF Rural Voices of Youth, District Focal Point Y-Peer Pakistan.

I saw elections in Denmark, and I'm impressed