The scars of her henna 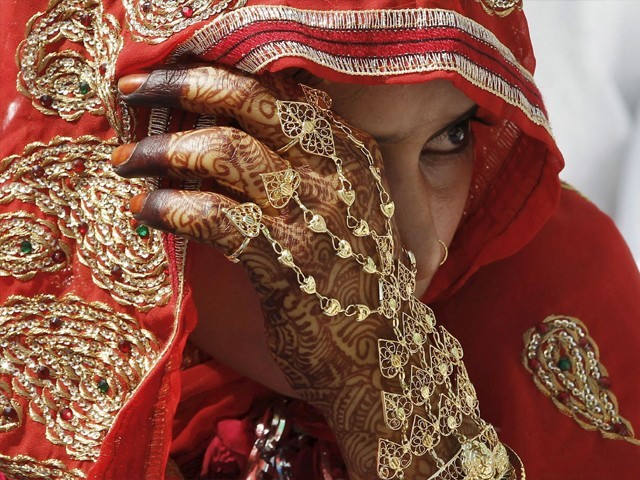 Hidden in the henna somewhere would be written the name of her most beloved. PHOTO: REUTERS

Zarah Hussain, a 17-year-old girl from Lahore Grammar School International, won an essay competition organised by the British Royal Commonwealth Society. This is a proud moment for Pakistan and highlights how much talent we have in this country. We hope she continues her love for words and wish her all the best for the future. The following is the short story that won her the accolade:

Red. Gold. Adorned in jewels, henna lacing her fingers with intricate, never ending flowers. And hidden in the henna somewhere would be written the name of her most beloved. A dream she’d dreamt since she’d seen the ring on her mother’s finger, and the glow on her sister’s face fresh after her mayun. Her sister had dulled out after the event, but that fact seemed trivial in her fantasies of the shining future.

She is 17, young at heart, but mature in body, and the red seems to suit her. So a man follows suit, asking for her hand, so she can soon have a mayun of her own. The long, incessant books fail to amuse her, and she thinks herself much more fit to be pampered, and to pamper, to live life as her mother has. So she presents her hand, yet bare, and dreams of colouring it with the name of her betrothed, but when she imagines the hue, the red lacing her hand tells stories far removed from what she’d thought. The red looks not like henna, but like blood, drawing images of the scars on her mother’s arms, that she’d dismissed as the fault of a woman lacking basic sense.

The scars seem more ominous to her now, speaking stories not of her mother’s unintelligence but her father’s anger and the broken bottles that never seemed to calm him down. The scars then distort into words, similar to those she’d seen her mother sneak out to read in the dim light of the moon; finding solace in the turning pages, convincing herself that a better world existed, even if only in stories.

The red drains away, leaving her hand pale white and bruising, like her sister’s sunken face. The face that smiled at the thought of her loving husband, considerate enough to be faithful to her. He reprimanded her, because he wanted to improve her. And yes, he may be harsh at times, but after all, he knew best. She consoled herself with the assurance that he acted so stern and unforgiving only because he saw her as the child she had been at the time of their union, and thought her in need of a guide.

The bruises darken, to leave impressions in her hand, causing pain when she touches them, for when she does, she can remember the darker truths she chooses to conceal. She tries to wipe them away, but the more she tries, the more they smudge, reminding her of her sister’s kajal at her rukhsati, speaking more of fear than of love, a tint that coloured her life.

The darkness from the bruises then starts to clear, leaving behind only the picture of a rosy baby girl, crying for the first time. Her daughter. She falls in love there, and adores how the cries seek not to express sadness but to declare openly their existence. The faint lines become bold, and her daughter becomes so as well, dauntless and curious, exploring the nooks and crannies of her house, amazed by every detail. But on one day, the fearless child finds a corner not so brilliant, her mother hiding away crying into her hand as she is forced to complete every painstaking house chore, despite being weighed down by her expanding pregnant belly. And at this point, the fear appears.

She sees her daughter grow, fading and thinning as she does, and sees her stop at age 11, when she sees a harsh, menacing figure appear. The figure exhibits such malice that she feels the need to recoil her hand, and clean it with a force that may undo the shape from her memories. This new figure declares the soft shadow of her daughter a bit too bold, and leaves her shamefully not so. She now feels the urge to vomit, to rid herself of the tales that the lines on her hand tell, but perhaps the future is not done yet, and wants her to view and understand the consequence attached to her shallow dreams. She sees her daughter lose all life then; still very much breathing, but barely moving, her outline formed from the lightest hue one could find.

The red then reappears, as henna this time, tracing around her daughter’s image, hoping to make it livelier than it was in truth. Then night falls for her daughter, and she feels the fear in her daughter’s shadow, the hideous omen of what is to come. The henna disappears to leave room for the expected bloodshed one may find on a lady’s first night at her new home. But the blood does not appear, as it already had a few years ago and has perhaps been drained by this time, or maybe was not meant to appear at all. But this reality the husband cannot stand, and determined to make her bleed, drains her of all the blood she had.

Her hand flushes red, and then the palest of whites, leaving behind the empty shape of her daughter, finally left without breath. The tears fall from her eyes, and wash away the remaining images, and yet she feels that they remain existing, just maybe not in her house, and not for a few years. But what she hoped a terrible nightmare, she found a possible reality and her agitation set in, forcing distorted images of her dreams into her head; the red of her veil now formed from blood instead of chiffon, and the gold from her jewellery was now merely the metal her chains were made of.

Yet these remained just dreams, and her hands had not been chained yet, so she found them moving, seeking to rewrite fortune, and to clean the blood from her destiny. And so she writes. Words seem tiresome no longer and she finally understands the stories that had bored her. She forms new tales, realising that she needs no other person to pamper her, but her own self. She devours the books that predicted her escape from these gold chains, and nurtures her own young heart that has yet so long to live.

The more she writes the more she has to say. She rewrites a future of career for herself, not as someone’s maid, but in her own right, as the individual she was born to be. She plans out battles against her upbringing, her plans for escape hidden in language instead of swords. Her hands now trace stories of a man she loves, who cares for her, and therefore learns from her instead of seeking to constantly teach her. And finally, she draws images of her daughter, in the boldest pen, with wild hair and daring beyond belief. She prays for a daughter born with freedoms she had to fight for, who seeks words she has yet to define, and seizes the capacity she has to achieve everything she dreams of.

With this narrative, her path seems more beautiful than the henna ever had, and the black of the pen is much more permanent than the false security of the red veil. And she realises that her hand is still out, a man in the room still seeking to take it, and to chain it to himself. She sees that her hand remains bare, and that the red of the henna has not tainted her yet. Her choice remains open. Her mother looks at her, her eyes aching with the hope for her daughter to choose the path that she had longed to walk.

(Do you accept the proposal?)

The author is a 17-year-old girl who loves food, travelling, and all creative activities.