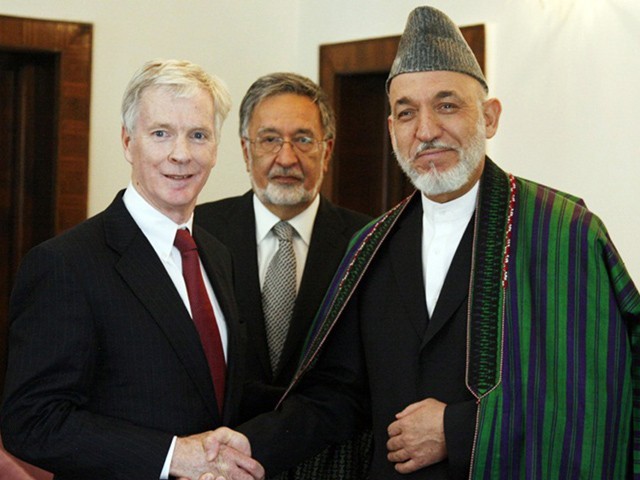 Ryan C Crocker was sworn in as the new United States (US) top diplomat in Afghanistan on Monday July 25. PHOTO: AFP

As the military drawdown begins in Afghanistan, the Americans are upping the diplomatic ante. They want a neat transition and a solid presence in Kabul after the exit. It was in this connection that Ryan C Crocker was sworn in as the new United States (US) top diplomat in Afghanistan on Monday July 25.

Crocker’s earlier stint in Kabul involved reopening the US embassy in 2002, after the Taliban government was replaced by that of the Northern Alliance. In his new assignment Crocker may actually be talking to the Taliban. Crocker’s predecessor, Karl W Eikenberry, was a former general, whose sole claim to ambassadorship was his tenure as the commander of North American Treaty Organisation (Nato) and International Security Assistance Force (Isaf) forces in Afghanistan.

Abrasive and brash, Eikenberry was often involved in verbal spats with President Hamid Karzai. In contrast, Crocker, 62, has impressive diplomatic credentials. For his services to his nation, he has been elevated to the coveted rank of Career Ambassador (equivalent to a four star general). Having spent most of his career in various capacities in the Middle East and South Asia, he has accumulated considerable expertise of the region.

Who is the new ambassador?

– As a child, Crocker was in Turkey and Morocco, where his father had served as a member of the US Air Force.

– He was trained as a Persian language expert before he took up his first diplomatic assignment in 1972 in the US consulate in Khuramshahr, Iran.

– His subsequent assignment was to the newly-established embassy in Doha, Qatar in 1974.

– In 1976, he returned to Washington DC for long-term Arabic training. He completed the 20-month program at the Foreign Service Institute’s Arabic School in Tunis in June 1978.

– In April 2011, President Obama nominated him as the next US ambassador to Afghanistan. He was confirmed to the post by the US Senate by unanimous consensus on June 30, 2011.

Crocker is held in high esteem by the American establishment. Former Secretary of State Colin Powell called him:

“one of our very best foreign service officers.”

President George W Bush called him America’s Lawrence of Arabia and noted that General David Petraeus had said that:

“It was a great honour for me to be his military wingman.”

Crocker had teamed up with Petraeus in Baghdad’s Green Zone, where both had forged a close understanding on all matters. Both would make it a point to jog together.

As his country’s ambassador in Kabul, Crocker is now charged with overseeing the world’s largest diplomatic mission. Under Eikenberry, the American embassy had grown from 200 people in 2008 to more than 1,100 in 2011: the face of a civilian surge intended to bolster governance and development in Afghanistan.

On his first day as ambassador in Kabul, Crocker told the diplomatic community in the Afghan capital that although “It’s time for us to step back and for the Afghans to step forward,” there will be no “rush for the exits.”

On a positive note, Crocker asserted that progress has been made but added that:

“We must proceed carefully… Frankly, we left the wrong way in the 1990s and we all know the consequences of those decisions.”

Almost coinciding with Crocker’s ascension to the top diplomatic post in Kabul have been disclosures by the Pentagon that part of a $2.16 billion US transportation contract in Afghanistan has ended up in the hands of Taliban.

The US is spending more than $6 billion a month in the conflict. A task force was formed last year to crack down on the misuse of funds by contractors, some of whom pay Taliban protection money. However, one cannot rule out the possibility that the siphoning of official money to the Taliban may be an effort to win them over. A recent report by a US congressional commission shows that some $34 billion in US taxpayer dollars have been wasted on contracts with the private sector in the wars in Afghanistan in Iraq. Large scale bribes were paid to win over elements hostile to the government as the Taliban regime collapsed in 2002. It may yet be a tool to forge new allies, under a new political dispensation after the military exodus is complete.

Afghanistan without Petraeus: 'Tough days ahead'