Fasting in times of load shedding 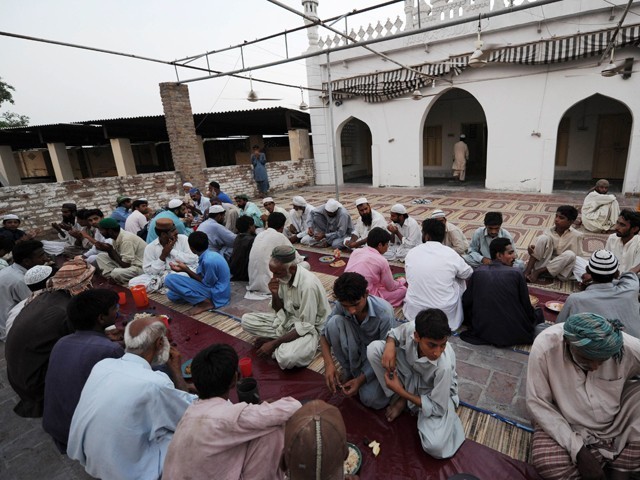 Expect this gift to weigh heavier on the faithful this year. PHOTO: AFP

Past Shab-e-Barat, brace yourself for the month of fasting.

Actually, Shab-e-Barat is a festival in name only. Its real significance is to usher in Ramazan. The halvas you are treated to, point to the imminence of thirty testing days followed by thirty rewarding evenings.

The mandatory fast, requiring that one neither eat a morsel nor take a sip of drink for a whole day, is a test in itself. It’s a vivid reminder of the nature of hunger and thirst. It is only at the end of a day of fasting that one fully appreciates food and drink as God’s great bounties they are.

Ghalib apparently ignored the evening treat and dealt with the fast as just an ordeal of hunger and thirst. Fasting, he laments, is a part of faith, but how does one provide for a cooled room and iced drinks? One also gets the impression here that only summer Ramazans were on his mind. But that is also how I feel these days. Ramazan has not only become a summer routine, it also brings you the gift of load shedding. Expect this gift to weigh heavier on the faithful this year. For the poor, fasting during summer itself is no mean test. They did not need the load shedding.

The poor, I refer to, obviously do not include those who are not subject to load shedding or who have the wherewithal to deal with the menace. The poor, for their part, fully comply with all Ramazan’s strictures. They ignore the excuse for not fasting provided by Ghalib and, at least to the extent of fasting, brook no concession seeking.

It is these poor fasting men and women who will be doubly tested this year. For a start, the weather is so hot and load shedding proportionately deep. But some of these people had taken to street protests against load shedding. When weather heated up and there was no sign of electricity for hours they poured on to the streets, shouted slogans and burnt tyres. If a power company office happened to be nearby they vandalised it. Not that this solved any problems, or restored power or made the high ups sit up and listen to their grievances, but there was still some catharsis. Once the Ramazan fasts begin, this too will not be an option. Those who respect Ramazan will also have to respect load shedding.

But why should that be so, considering religious fasting involves no prohibition of protesting against injustice? The thing is shouting does not become a fasting man. On one hand, fasting in summer drains one of the strength needed to take to the streets and shout one’s heart out. On the other, fasting makes for a culture of restraint. People want to avoid unnecessary confrontation and not risk missing collective prayers. Additionally there are the iftar preparations to take care of.

While the fasting public postpones the protest on account of the various Ramazan imperatives, the authorities will welcome a month of not having to deal with protests – at least violent protests. They will also seize the opportunity and increase the duration of load shedding.

I am aware of the pure of heart who sincerely believe that in view of the holy month the authorities will somehow cut the load shedding. Like the proverbial barber reminding the customer that the uncertainty about his hair will not last long, let me just say that any miscalculations will be soon exposed.