Why saying ‘Scene On Hai’ is more important than you think 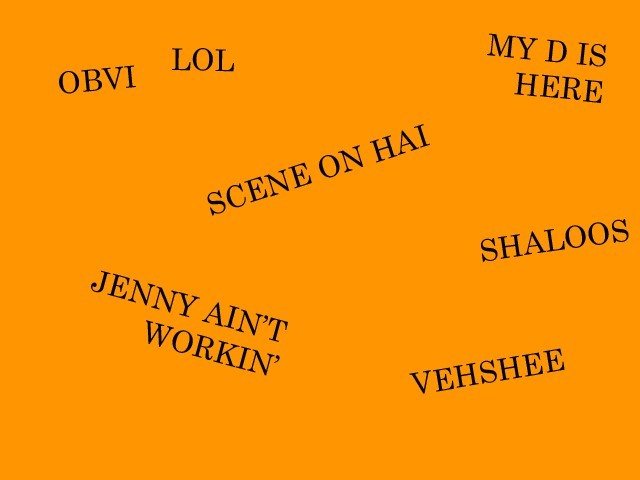 July is here and I know this because my friend N came barging into my room and aimed straight for the fan.

“It’s so hot, God you can only wear shalloos.”

And Kay for kameezes, obvi (That’s obviously shortened). This same friend owns a Jenny (generator), gets picked up by her perpetually late D (driver) and has a severe dislike of “meylas” because, you know, they’re such “shady boiz”.

Welcome to Burger-speak. We don’t laugh, we LOL. We take English words in Urdu context, and mix and match as we please. It started out as misspellings on the internet and on our phones, and now it has slipped into our everyday speech.

Somewhere, somehow, my Urdu teacher is reading this and mourning my generation. Note, I say Urdu teacher. When people my age start conversing in two languages, it’s the Urdu that gets shortened or twisted, shoved into awkward English sentences, or turned into one-liners that both end and summarise a long winding conversation: “Dude, chup karr.”

It’s not even Urdu, or at least Urdu that the authors of our textbooks could recognise. But this article is not about new words and what they mean; this is no “Guide to Understanding what your Pakistani Teenagers are Saying”. That’s because words fall in and out of use within weeks, and depend on your location. (Who says Vehshee anymore, apart from Lahoris?) No, the real question is why do we even bother?

One reason could be the linguistic term ‘code switching’. Code switching is when a person is fluent in two languages, but their speech is an amalgam of both. It’s common among, say, Latino-American families whose children are forced to speak Spanish at home and English at school. They end up talking neither and both.

Or in a more localised example, when my Pakistani immigrant aunt wanted to yell at my American-born cousin“Tumhare dost kab jaa rahe hain?” and he replied in a funny mix of “Ssh, mum they’ll hear, um, thori dere mein, okay?”

Code switching has a lot to do with mother tongues and societal pressure. But this isn’t a straight forward mix of clauses and verbs. The words my friend N used were English, but I doubt that jenny/generator would register with anyone outside Pakistan. And for the record, her mother tongue is Sindhi – but her code switching happens only between Urdu and English.

To be Pakistani is to know languages, but this is something else. You could theoretically live a perfectly wonderful life knowing only Urdu in this country. Or you could spend your entire life here knowing only English; our country gives us that option too. But we don’t, and maybe the simplest reason is the most emotional and simple: maybe we, people our age, don’t want to because we don’t have to?

Think about whose catering to whom. Put on MTV Pakistan or Aag (those funny self-proclaimed youth channels) and watch it with your grandmother. The Urdu shows will have English splattered across them, the English shows will feature Urdu so that all you’re hearing is Minglish, and your poor Dadi’s lost.

See what I did there? Stuck an Urdu term (Dadi) in English – and you, as a reader, probably processed it automatically. On one talk show the host says “Humay respect nahin milti hai”. A sixth grader could tell you respect in Urdu is eh’teraam, but the host chose not to use it and we didn’t mind.

Next time you’re on the road, try to count how many billboards are in English, in Urdu and in Romanised Urdu. Chances are the Romanised Urdu will be the most common. You can venture beyond Karachi and spill over to the highway, and you’ll still find TalkShawk haphazardly painted on dwellings in Roman Urdu. And TalkShawk itself is neither English nor Urdu.

The only reason we use both languages and make up our own words is because we’re indebted to both, endeared to both. Could Urdu picked up from cultural enclaves in long-ago northern India work here? Could English – that language we attack for colonial reasons but still use to pass exams – truly work in Karachi?

So we pull and mix to suit our needs, and nobody knows this better than a kid who understands the rules but isn’t constrained by them.