In a sea of faces, she was the anomaly 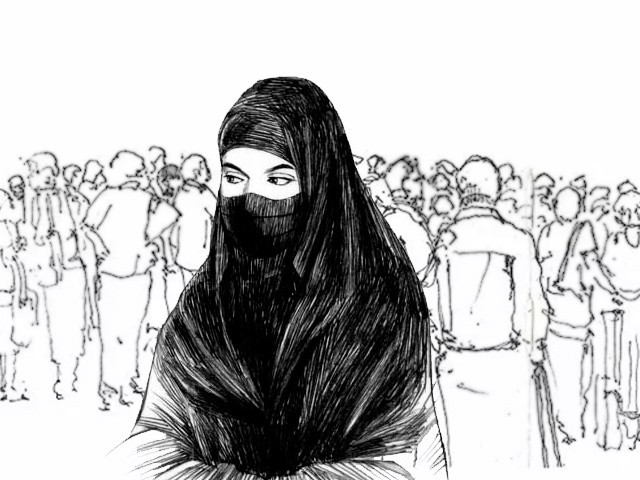 Her head was bowed down; she didn’t want her eyes to meet with someone else’s.

She got off from an old rickshaw and paid the driver in small bills. The driver counted the money twice and left without even looking at her. Some would have called the driver rude, but for her this was routine.

She started heading towards the crowded market. Such places troubled her, but it’s impossible to find a secluded vegetable market these days. She wore simple clothes, a plain black shalwar kameez and a shawl that covered her head while also slightly covering the left side of her face. She was not someone who would look good in fancy clothes, or at least that is what she told others and herself. With her head bowed down and her left hand holding the shawl firmly to cover her left cheek, she took a deep breath and fused in with the populace present at the market.

She found her way towards the stall, the one from which she always bought her vegetables, and handed a small list to the young boy in charge. The boy started gathering and weighing the vegetables while she stood there and waited. The small tents that covered the market didn’t do much about the cold weather. The cool breeze was at times unbearable, but the shawl she had worn was managing to somehow keep her warm while also hiding her face.

The crowd was getting rowdier by the minute; she couldn’t even manage to stand still for a second. Regular shoves and elbows were annoying her, but soon the boy handed her the vegetable-filled paper bags and announced the bill. She took out some cash, made a quick payment and started moving towards the exit. She had to plod through the crowd on her way back which, according to her, was a weekly routine she hated the most.

The bags were heavy and she couldn’t possibly manage to use her left hand anymore to hold the shawl and cover her face. With every stride she took, the shawl slipped more and more from her head and finally it was resting on her shoulder. Her face was no longer covered. Suddenly she couldn’t manage to blend in the crowd. Her face made her stand out.

The long scar on her left cheek was quite visible. The burned and damaged skin tissue caught the fancy of all the passersby. With every stall she crossed, more heads turned and the remarks that were passed, although whispered in a loud crowd, could still be heard. Her head was bowed down; she didn’t want her eyes to meet with someone else’s, but there was no way for her to cover her ears. She heard the sound of muffled conversations, but was only able to make out a few words like ‘acid’, ‘face’ and ‘God forbid’.

She had unwillingly become the centre of attention which made her forget the way towards the exit. She raised her head and started searching for the way out. Her eyes couldn’t find the nearest exit, but they did find what she loathed the most – pairs of the most pitiful eyes that focused solely on her. After some wrong turns, she finally found the exit, but before she could get out of this chaos which she thought was her own creation, her path was blocked by a young child.

The child had his eyes locked on this wicked woman, who was causing uneasiness for the many innocents present at the market. The young boy was staring at the black shalwar kameez clad woman and the scarred woman froze when she saw the boy’s ruthful eyes. For a moment, it was as if the crowd had gone silent and the boy and the woman were caught in a staring contest before a woman, most probably the boy’s mother, covered her son’s eyes with her hands and took him away while also giving the wicked woman a look of pure angst.

The wicked one put her bags down to properly cover her entire face before finally getting out. She tried to stop a rickshaw, her ride back home, and one finally stopped. But before she got in, she turned around to give the market a final look and she saw that everything seemed normal once again. The market had one anomaly that had somehow disturbed the habitat of the very beautiful and perfect inhabitants. That anomaly was finally leaving in a rickshaw.

There were tears streaming down her face and she was wiping them away with her shawl. This shawl was a life safer, she thought. She kept thinking how she would have to do this all over again on the same day next week and what troubled her the most was the fact that it had been four years, but she still couldn’t get used to the stares and the looks.

She checked her watch and thought her husband must have reached home from work. She had gotten late. She asked the rickshaw driver to drive a little faster. Cooking for her husband while he talked about his day at work was something she enjoyed immensely. She was eagerly waiting to reach home. The radio in the rickshaw was playing. The song playing on the radio was not something she would usually listen to, but on this ride back home, she had no choice but to listen to it.

Lovers do not betray.

They are used to cruelty,

They don’t do any good for anyone.)

She didn’t know who the singer was but she was starting to like the song, but before it could end, she had reached her destination. She paid the driver who gave her a smile and thanked her. She was walking towards the main door, but it opened before she could even reach and knock it or ring the bell. Her husband was standing there holding the door and smiling at her. She kept smiling as she reached the door.

“Aren’t you a sight for sore eyes?” Her husband replied.

She couldn’t stop smiling, she was turning red. There was only one man who could make her blush this way. She headed towards the kitchen and asked her husband,

He started telling her about his work while she was glad that she would be doing this again on the same day next week.