Dear Comedy, when did you go from mere jokes to demeaning mockery? Yours truly, Ali Gul Pir 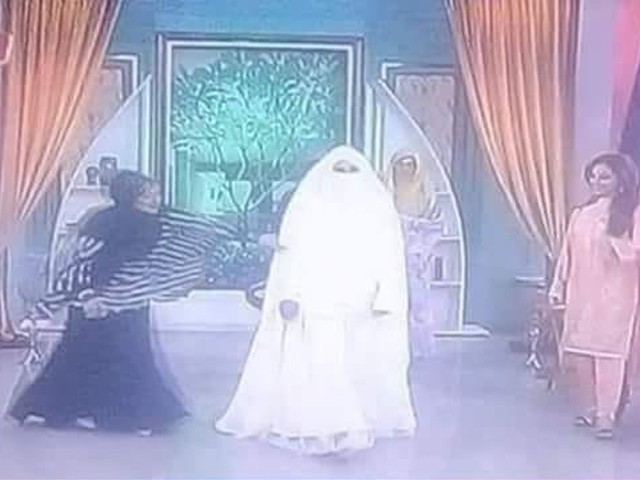 Television shows talk about the mystery behind the burka more than the energy crisis in the country. PHOTO: SCREENSHOT

It is time to acknowledge your stake in my sanity, your ability to keep me hopeful in tough times and your power to not let me take life too seriously. I love how you take the world’s most tragic, absurd and unjust news and turn them into awesome memes (jokes) which make millions of people laugh.

When I was a child, I would repeatedly ask my mom to read out the jokes from her weekly magazine to me. I would memorise them so I could tell them later in school or to other adults.

Earlier on in life, I understood that if you’re funny, you will be accepted. It didn’t matter if you were dark-skinned, nerdy or poor. If you made people laugh, it would make you more likeable. This realisation made me earn the reputation of the ‘class clown’ and I thoroughly enjoyed it.

On the other hand, at a young age, I also experienced the dark side of humour one day, when I made fun of a classmate’s shoes because they were really big. They were those old, ‘uncle sneaker’ type shoes and I made the whole class laugh at them. It was funny till I saw him during our lunch break: he was sitting alone and crying in a corner. Unknowingly, I had used this magical power of acceptability for evil; I had used it to hurt a peer.

I have watched the internet make techno remixes of an interview of a drug-addict child (Kamlesh) and I have also seen George Carlin’s hilarious perspective on religion. The range of comedy in this world is tremendous and you can choose the jokes that best suit you.

Moreover, just like Pakistani music is known worldwide, our comedy is watched by many countries as well. Many times, I have seen Umer Shareef’s old jokes being recycled in top-rated Indian comedy shows. I also know many Bengalis who have vividly watched satirical sketch shows like 50/50.

Currently, we have so many different types of comedies to choose from. We have jugat, stand-up (from the likes of Rauf Lala to Saad Haroon), mimicry, improvisational, musical comedy and so many others. All these are mostly seen on television channels because that is the medium for the masses. Most Pakistanis are exposed to television more than any other form of media and television has given us many comedic classics like 50/50, Aangan Terha, Sub Set Hai, Bulbulay and many more.

But now, most of the political and social comedy I see on television is based on personalities rather than policies or social issues. At times, I’m left thinking if the producers of these shows are high when coming up with ideas. One such genius idea is to ridicule the Prime Minister Imran Khan’s wife, Bushra Maneka, because she doesn’t dress the way we want her to. Television shows talk about the mystery behind the burka more than the energy or water crises in the country.

Years of mimicry on tv has ruined the quality of comedy in Pakistan. We don't make fun of policies and social issues, we'd rather dress up as a politician or even worse their family members and ridicule them #shameful pic.twitter.com/CRxjr8hz2v

Perhaps it’s easier to write a joke about the supposedly ‘effeminate’ manner in which Pakistan Peoples Party (PPP)’s Chairman Bilawal Bhutto Zardari talks than to make an intelligent joke about his silence on the corruption committed by his party members, for instance. Whatever the reason may be, we now see an excess of mimicry and jokes about personal characteristics and appearances.

This demeaning form of comedy is not helping our culture. It is telling us to ridicule each other’s uniqueness instead of celebrating it. It might have been okay to say that all Sindhis are lazy or all Pathans are gay but it is definitely not the kind of comedy we need right now. We need to move on from comedy that divides and attacks and instead need to focus on making jokes that spread happiness and create an environment of inclusivity.

Comedy, my love, as a child you became a tool to make friends and currently, I make my livelihood because of you, but I hope that we all use you to spread love, tolerance and happiness and that we remember the golden words of Uncle Ben:

Yours truly (till I start getting Fawad Khan’s roles),

Comedian, writer, rapper and producer. He tweets as @Aligulpir (twitter.com/Aligulpir)

What I learnt from Robin Williams

No, I’m not a football fan - bite me Suarez