Does terror have a religion? 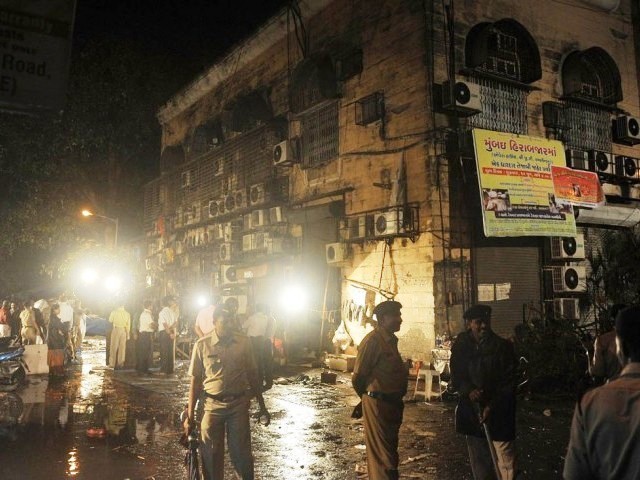 A Muslim family lost a son who was in his early twenties and had gotten married just a couple of months ago. PHOTO: AFP

Does the bomb have a religion?

Does the blast discriminate among victims?

In the recent serial blasts in Mumbai, a Muslim family lost a son who was in his early twenties and had gotten married just a couple of months ago.

Is the pain of this family any less acute than that of many others who lost their loved ones but, belonging to a different religion or community?

Terror has victims not a religion. The merchants of terror know no religion. When someone dies in a terror attack in India, it’s an Indian who loses his or her life, not a Hindu or a Muslim.

So I ask: How is it justified to give a religious tag to terror?

Had terror had a religious affiliation, then Muslims in Pakistan should not have lost their lives at the hands of various terror groups. In the last six years, more than 35,000 Pakistanis have been killed in incidents of terror.

No doubt terrorism has found a safe haven in Pakistan, due to several political reasons, and this is a threat not only to the host country, but the entire region.

But, can we say that Muslims in Pakistan are great votaries of the terrorists’ cause and actions?

In an article in Foreign Affairs magazine, titled “Pakistan’s middle class extremists,” based on a survey  in Pakistan, it said that people are:

“generally negatively inclined toward all four militant organizations… Pakistanis living in violent parts of the country, in Khyber- Pakhtunkhwa in particular, strongly disliked these groups… poor Pakistanis nationwide disliked the militant groups about two times more than middle class Pakistanis… (and) this dislike is strongest among poor urban residents.”

The terrorist groups don’t find overwhelming support among the fellow followers of faith. So terror has its own version of Islam, disjointed from the religion that the masses follow.

And, it’s politics and not religion that guide militant groups.

So I ask again. How justified is it to stoke the danger of Islamic terror in India and incite the majority Hindu population to make Muslims second class citizens?

After the recent attacks Subramaniam Swamy, the chief of a the single man Janta Party, and undeclared spokesperson of the Hindu rightist groups, wrote a piece in which he hurled accusations at the Muslim community for killing Hindus in “halal fashion” and asked Hindus to retaliate.

In a time when people are getting increasingly frustrated and paranoid with continuous terror attacks in different parts of India, particularly Mumbai, Swamy is trying to exploit the raw sentiments of the people to create divisions in the society, in the name of religion. And by doing this Hindu Swamy and his patrons are pandering to the design of those so called Islamic forces who want to turn India’s diversity into divisiveness, who want to keep the country’s religious fault-lines wide open thereby attacking the very idea of India.

If Islamist militant groups abhor India’s cosmopolitanism, its socialism of religious traditions and existence, so do the Hindu rightist groups, who have for long been trying to turn the country into a theocratic state.

Hindu rightists have been thriving by exploiting religion and by polarising democracy in the name of faith. Many blood baths took place in the 1980s in the name of establishing Ram Rajya and they also managed to demolish Babri Masjid, which left a great psychological scar on India’s secular tradition.

Narendra Modi, a by-product this kind of politics, violating his duties as chief minister of Gujarat, did as no other rulers in modern India had done before – he allegedly allowed the genocide against Muslims in 2002, thereby creating a deep wedge among the two faiths who have been coexisting together for ages.

Then there were the alleged terror attacks perpetrated by the Hindutva brigades in the last few years -the terror attacks in Malegaon in Maharashtra (2006, 2008), the Samjhauta Express bombings (2007), a bomb blast at the Sufi shrine in Ajmer Sharif (2007), the Mecca Masjid bombing, and an attack in Modasa in Gujarat (2008).

If looked at from a certain perspective, both the Hindutva groups and Islamist terrorists are working in tandem to disturb the society in South Asia, to turn the clock back to a violent and a disturbed past which we have been trying to push out of our consciousness.

Though the Hindutva forces don’t adopt suicide attacks and extreme violent methods in their operations and they are not as spread out as the Islamist groups are, they are however, very consistent in their campaign and do not miss an opportunity to exploit the situation to their favour.

It is to the credit of the Indian state that the fundamentalist groups do not get the kind of patronage they enjoy elsewhere. They have always been at the margin in India and people understand the design of the Hindu rightist groups. That’s the reason why a person like Narendra Modi is a persona non grata in some of the states in his own country; he is at the receiving end of an enquiry constituted by the country’s highest court and people like him are always exposed by the media and masses.

People of India have understood the designs of internal and external terrorists. This is the reason that no matter how grave the provocation is, they stand up to the terrorists by remaining united; they know that this is an attack not on a particular religion but on the sovereignty of the country.

People understand that jingoistic salvo and communal fires stoked by the shallow nationalist forces like Swamy have to be rejected to keep the idea of India intact.

People in Pakistan also realise the danger of such forces who are keeping them hostage in the name of Islam. Voices against the obscurantist forces are getting stronger and stronger there and they know that if they can’t check the march of such forces now it will endanger their existence.

Obscurantist forces, therefore, are not the followers of Islam and Hinduism – the faithfuls and believers don’t attack humanity, they cherish the bonds. The terrorist groups who attack innocents and kill and maim humanity have only one religion – the religion of terror.