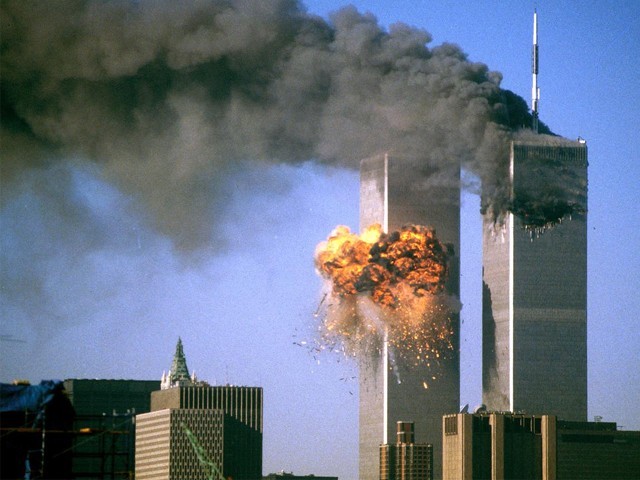 Flames erupt from the South Tower of the World Trade Center, after it was struck by hijacked United Airlines Flight 175, in New York City, on September 11, 2001. PHOTO: REUTERS

Just about a couple of days ago, on the eve of yet another 9/11 anniversary, I was telling a friend how painful these past 17 years have been for the US. What happened that dreadful September morning was nothing less than a shock to the American system; a jolt of unprecedented proportions that we, as a nation, still haven’t been able to get over or recover from in more than several different ways.

September 11, 2001 changed America and the rest of the world forever. It tore apart the settled norms and values. It uprooted age-old beliefs that America must make friends all over the globe and work with them to consolidate and maintain its position as a force to be reckoned with. Domestically, it caused anxiety not only for millions of people belonging to the Muslim faith but also forced the government to take measures that were unconventional and uncharacteristically un-American.

What followed 9/11 was a complete overhaul and a massive turnaround of fortunes in the most negative ways. The US went on the rampage to root out the scourge of terrorism. It picked battles in different parts of the world in its pursuit to find the al Qaeda vultures. It declared war on Afghanistan – a country many believed had no direct linkage to 9/11. It marched into Iraq on the pretext of Saddam Hussein hiding weapons of mass destruction. Washington even sent its emissary to Islamabad and asked its leadership to unconditionally facilitate the US in its efforts to go against terrorist outfits that potentially had their hideouts in the hills along Pakistan’s border with Afghanistan.

What transpired after 9/11 was the US rocking its own boat rather violently in terms of shaking up matters from within and without. The Patriot Act of 2001, the establishment of Guantanamo Bay detention camp, and the unfettered powers of surveillance given to the security agencies to interfere in US citizens’ lives were some measures that may have proven effective in the short term but have somewhat lost their efficacy in the long run.

While trying to protect itself from yet another 9/11 type onslaught, the US has lost a few friends along the way. That obviously happens when nations are compelled to make hard choices. However, what’s happened is that other than the allies in Europe (not particularly true in the Donald Trump-era anymore though) or a few in the Middle East, Washington has been left somewhat isolated in the comity of nations. But that’s all part of the overarching approach that the US took while remodelling and reconfiguring its relationships around the world.

The hurt inflicted on the Americans due to 9/11 can never be forgotten or forgiven. There are no two ways about it. Other than the loss of thousands of innocent lives, enemies of the country proved beyond doubt that the US was not so infallible. The terrorists outsmarted our robust systems. We were caught off-guard.

But let’s not forget one thing – times change and so should a nation’s policies and strategies. The hot spots that the US created beyond 9/11 in Asia, Africa and the Middle East are not only draining its resources but it’s also time to review and revise policies that have dictated actions in those regions. The threat of terrorism is not going away anytime soon. However, there are more effective ways than sending forces and belligerently going against nations to tackle that menace. The US boasts of a robust network of intelligence agencies. Moreover, covert actions conducted using Navy SEALS and so on, can not only be more effective but will cause much fewer global and political ramifications to deal with.

Of course, diplomacy is still alive but not kicking. Granted that Trump has caused havoc for America’s image abroad, the embassies can work wonders in peacefully regaining the lost friendships and serve as the planning bases to go after the bad guys.

The US has still got a lot to contribute to the world in terms of financial and political leadership. This is the time to self-reflect; re-navigate and tweak the course of action. While we can never bring back the Jews, the Muslims, the Christians, the Hindus and every other innocent life lost, the dark cloud of 9/11 needs to be lifted. United States should re-think and put a halt to its assaulting ways.

Whereas it is understandable that it is not prudent to do the “right thing” or go soft on terrorism at the moment, a good start could be closing down the Guantanamo Bay detention camp. No one is asking for a general amnesty to be granted to the inmates but that prison itself has become a symbol of US recklessness and has contributed a great deal in spoiling our image in the outside world. Barack Obama, despite his promises, could not close down the camp. Can Trump, our leader, accomplish the task?

All said and done, there’s always time to move one. When nations are hit by calamity, they do not and cannot live in the past. If we spend our lives in fear there’s not much that we can accomplish. In fact, we end up digressing and deviating from the ideals and values we stand for. The US needs to snatch back the lost initiative and ensure that it grows out of the 9/11 psyche sooner rather than later.