What the media did not tell you 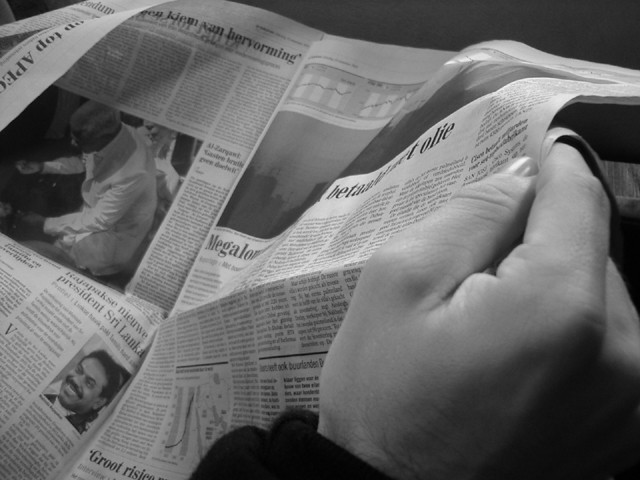 Half truth is not the truth. Our media needs to realise and remember that.

As always, we have been busy with our usual chronic problems – Muttahida Qaumi Movement (MQM) and Pakistan Peoples Party (PPP) having a go at each other, the worsening electricity crisis, crying and cribbing over foreign aid, making insane statements that hurt at least one segment of our society and so on. But, while the nation was kept busy with this, there were other serious developments happening on the political front and economic front that our lovely media forgot to tell you about because they either thought it was not news worthy or they just decided that you do not deserve to hear the truth.

So, here is another look at a few stories in the last few days that were covered by the media.

What the media told you: Jehangir Tareen, ex minister and current Member of National Assembly (MNA), plans to form and launch a new party of ‘clean’ politicians by September. The aim of the party is to bring together like minded clean politicians to bring about change. The tentative people for this party would be the outcasts from all other parties, like Marvi Memon, Shah Mahmood Qureshi and so on.

What the media chose not to tell you: To start with, no one in the media bothered asking what Jehangir Tareen intends to do with this new party as he is already an MNA on a PML-Q ticket.

Is he saying that PML Q is not clean? If he knew that then why did he bother running on their ticket during the elections, as given his resources he could have won on his own as well.

So, what is it that his new party intends to do? It wishes to support apparently clean politicians and form an alliance with someone who has similar ambitions – that is Imran Khan. Effectively this is like a marriage proposal, where there is a groom, the Pakistan Tehreek-i-Insaf (PTI) and the bride is being prepared with the exact specifications of the groom in mind.

Why would there be a need to create another party that intends to do what Imran Khan is already trying to do, which seems to be to clean up the politics in Pakistan.

So, the question here is why doesn’t Mr Tareen join PTI?

What possessed one of the most successful businessmen in this country to form a political party?

No serious businessman enters politics as it tends to hurt their legitimate business activities, so why is Jehangir Tareen doing this and more importantly, who is backing him for this adventure?

There was no mention of this and somehow the story vanished just after one day of being reported.

What the media told you: The electricity crisis is growing by the day and the shortfall is over 5,000 mega watts. People all across the country are unable to get electricity and there are riots in various cities. The government has failed to curb this crisis and it is the fault of the government that all these riots are taking place.

What the media did not tell you: I am certain that you curse the government every day, a couple of hundred times, for not ensuring that you have electricity. What no media outlet is currently telling you is that the government is not in control. The current crisis is being caused by the power companies and Pakistan State Oil (PSO).

And, why are they not giving you electricity? That is simple.

So, the question is why aren’t distribution companies paying for the electricity they are using? That answer too is simple.

The bills they are receiving are not enough and there is serious electricity theft especially in Karachi and Peshawar. So, unless they get money for all the electricity supplied they cannot pay off the debt. By now you get the point, but for some reason our media has decided that telling you all this is a wastage of time or well maybe the people of Pakistan are not smart enough to understand this whole issue, so blaming the government is the easy way out.

What the media told you: The United States (US) is blocking military aid due to its reservations over Pakistan Army’s fight and support. Pakistan continues to ask for the required aid as it is needed to fund future operations.

What the media did not tell you: Every time there is mention of aid for Pakistan, our media transforms into a teenager – instead of reporting facts they chose to twist the truth with childish logic.

Same old questions: Why do we even need aid? What good is aid for us? Why do we need American aid? Why don’t we work with the Chinese?

Even though all these questions have been answered at length, our media chose to discuss them again, instead of raising genuine questions. No one bothered to explain that Pakistan needs aid for a very basic reason: we just do not have enough money to fund our activities as only 2 per cent of the population pays taxes.

No one clarified that we need American support through aid and otherwise in order to support our economy.

No one bothered to explain that it is the US that helps Pakistan get the International Monetary Fund (IMF) loan, while China just makes statements.

Love it or hate it, the US help to Pakistan is our need. They have an agenda, and we have a need, so the common sense here is to fulfill our need. But for some reason, our media chooses to blatantly lie to our people about this fact. We may not like it, but it is a fact that we need to come to terms with for a foreseeable future.

While cars and buses burning on the streets of Karachi make excellent shots for the front page and the 9 o’clock news, a lot more is going on in this country. Our media chooses to ignore alternative narratives and instead chooses to focus on the constantly worsening conditions and situations.

While harping on about free media, they choose to keep the people in the dark by feeding them half truths! Maybe it is time for our media to try and grow up by taking a lesson from what has been going on in the United Kingdom (UK) where Rupert Murdoch has been trying to save his media empire which is falling apart simply because they chose to report half truths and make money off misery.

A newspaper like The News of the World had to shut down after 168 years just because it came to light that they had been lying to the public at large. While I do agree that our media is not as old and as mature as the one in the UK or Europe in general, our media does have sense and it can learn from others.