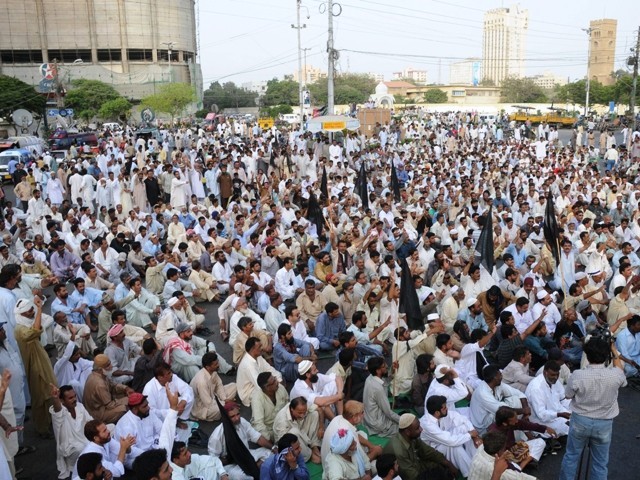 The people of Karachi are suffering in this clash between politically-backed unions and the financial clout of Abraaj Capital and the KESC. PHOTO: IRFAN ALI

The Karachi Electric Supply Corporation (KESC) has been embroiled in a dispute with pockets of its unionised labour force for a while now. We have witnessed unbelievable scenes involving violent protests at the central office of the KESC, followed by accusations and counter-accusations from both sides.

Now, the management of the electric supply company has stated that they were unable to procure additional supplies of furnace oil due to an ‘emergency’ situation, thus jeopardising the supply of electricity to the city.

On the other hand, the roundabout near the Governor House has become a campsite, inconveniencing motorists on one of the busiest rush hour junctions in Karachi. Another ‘siege’ of the KESC’s central office has been called off, after intervention from the Poirotesque Provinicial Home Minister Mr Manzoor Wassan and talks are underway.

This is the sad state of affairs vis-à-vis electricity supply in one of the largest cities in the world. Karachi, a veritable metropolis of 18 million souls (or more depending on your source) is already being plagued by load shedding and ‘cable faults’ due to a power sector crisis as a result of burgeoning circular debt. It is criminal that the misery being heaped upon the general populace is being further added to by a combination of political cronyism, inept management, along with violence and blackmail.

It is important to note that KESC is now a privately-owned organisation, with a new management structure put in place since 2008. Consequently, as a privately-owned business concern, they have the right to retrench employees in order to improve profitability, efficiency or any other strategic objective. Retrenchments have been a common occurrence, particularly in the financial sector, given the economic turmoil, globally and locally, over the past two years.

The legal approach to combat unfair dismissal would have been through the judicial system; instead, there have been reports of union workers impeding other operational staff, vandalising vans etcetera. The management, which is purportedly ‘world-class’ and ‘experienced’, have been unable to resolve a key issue which is hindering the operational efficiency of the organisation. In the corporate world, this is a significant failure and would usually result in some sort of internal evaluation and accountability.

Unionised workers within the KESC are a legacy from the times when this was a Public Sector Enterprise (PSE) and these unions are affiliated with all the three major political parties in the city – who happen to be in power, notwithstanding the odd arrangement by one of them who have a governor in place, yet they claim that they are in the ‘opposition’.

The de-politicisation of KESC’s lower level operations and maintenance staff is of paramount importance for the efficient functioning of their work-force and the organisation is within its rights to sack workers deemed surplus to requirement or for disciplinary reasons.

Nonetheless, keeping in view the legacy of nationalisation and the political realities at hand, the best-case scenario for a solution to this impasse could be some sort of enhanced financial payout to the union workers to compensate for the retrenchment (although a ‘golden handshake’ scheme has been previously rejected by the union workers).

The crux of the matter is that the people of Karachi are suffering in this clash between politically-backed unions and the financial clout of Abraaj Capital and the KESC. It is a shame that the political parties can take out rallies and hold protests against real and perceived criticism of their leaders, yet not a single political organisation is ready to demonstrate for the atrocities being committed on the Pakistani people. Let us hope against all hope that this issue is resolved, once and for all.