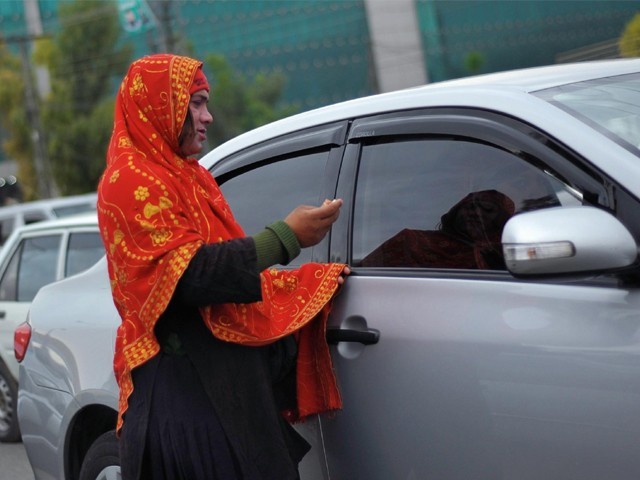 A transgender woman begs for alms from motorists at a traffic stop in Rawalpindi, outside Islamabad, Pakistan, on March 27. PHOTO: AFP

Wandering across the city of lights without a clue about your destination has a certain edge to it. When it comes to digging up possible stories hidden somewhere within this metropolitan, the best possible course of action is always to take a walk in this crowded coastal expanse. Carrying the burden of writer’s block, I decided to journey through this city in search of inspiration.

It took a significant part of the day for my restlessness to triumph over my determination, and with a sense of certain defeat, I paused for a cigarette at the nearest cabin I could land my eyes on. Dusk was almost upon the metropolitan, the crowd starting to disperse as yet another day neared its end. Some emerged as victors while others did not, but somewhere a forgotten portion of this city’s population faced certain defeat, like they have most days in their lives.

It was at this point of the hour that I encountered an individual. I was immediately baffled, as I contemplated how to address the person standing right beside me. Do I address them as ‘he’ or ‘she’? Should I even approach them in the first place? I kept questioning myself until I finally decided to stop second guessing my instinct and turned to greet her. Yes, she was a transgender, and calling her by the right pronoun seemed the very least I could do. Calling her a ‘he’ just didn’t make sense.

She happened to stop at the same shop I did, to buy a cigarette after a tiring day of begging for a living. A brief introduction was all it took for me to realise that she too had a lot burning up inside her, and the fact that someone was going to narrate her tale was perhaps the one good thing that happened to her that day. After some polite conversation with Saima – her preferred name – I tried to get further insight regarding the humiliation and denial her community faces on a daily basis.

The following conversation began with reluctance from both sides, but quickly streamed towards a subject I personally felt more discomfort in confronting, but to my surprise, Saima was more keen and straightforward in answering my questions than I was in asking them. I decided to begin with a simple question.

Where did it all start?

I never asked the people who brought me up about my parents or how I ended up with them. They are the only parents I know, and my community is the only family I have. I started begging when I was eight-years-old. I didn’t need makeup or fancy clothes back then, being a child was enough to get out on the streets and beg. Later, when I grew up and my body started developing in both a manly and an unmanly manner, I knew it was time to alter my style.

How do you cope with the daily humiliation and neglect?

Humiliation and neglect are a significant part of my daily routine. Over the years, we have learnt to deal with the comments and abuse thrown our way, and frankly, we have evolved to become better at replying to bricks with stones. However, what really hurts is the ignorance we receive from people who drive their fancy vehicles and treat us as if we don’t exist. There are still some people in this country who deny our very existence, which is very difficult to cope with.

How does it feel to be treated differently when you go out on the streets?

The moment I was old enough to understand where I was and what was going on in my surroundings, I was told by my guardians about how different I am in comparison to other people my age and gender. This, I believe, is the best thing about my community. We don’t give false hopes to our children – we crystallise the harsh realities of their existence and the difficulties they’ll face in the world beyond those walls, which in turn results in very few surprises and even fewer disappointments. When I first went out on the streets, I knew I was different and hence the abuse and mockery didn’t have as big of an impact on me as it should have.

Have you ever felt self-pity in your life?

Well, I wouldn’t label it self-pity, but there have been several incidents on the streets that were immensely painful. One particular time I went up to a vehicle with a family inside. The husband looked away the very moment he laid eyes on me, so I went up to his wife and asked for some money. Her daughter was sitting on her lap, and upon looking at me, she pointed her finger at me and said to her daughter,

“If you don’t listen to your parents, you’ll end up like this.”

Saima couldn’t speak any further, and I had all my answers. I smiled; pouring all the affection I had within me in it, and paid for her cigarette. She smiled back, and it was enough. This was the first time I engaged in a conversation with a transgender, and I found her to be honest, sympathetic and strong; traits that are seldom witnessed in people today. I never saw her after that evening, but that casual encounter brought to the fore a reality that is often ignored as we go about our daily lives.

Yes, Pakistan has provided legal protection to transgender people, namely by letting them self-identify their gender on their passports, and through the Transgender Protection Act. We now have more trans rights and more transgender people occupying public spaces, such as Marvia Malik and Kami Sid.

Yet, the ground reality remains that hatred, disgust and contempt is all we have offered this community, who a decade ago were not even deemed human. Progressive implications on the state level can only be considered partial accomplishments until our society and the individuals residing within it alter their perspectives to be more inclusive and treat people with the respect they deserve. Life should only be as hard as one person can bear, so the least we can do is try and take some burden off the shoulders of our transgender community.