Can you prove your marriage? Not if you are Hindu 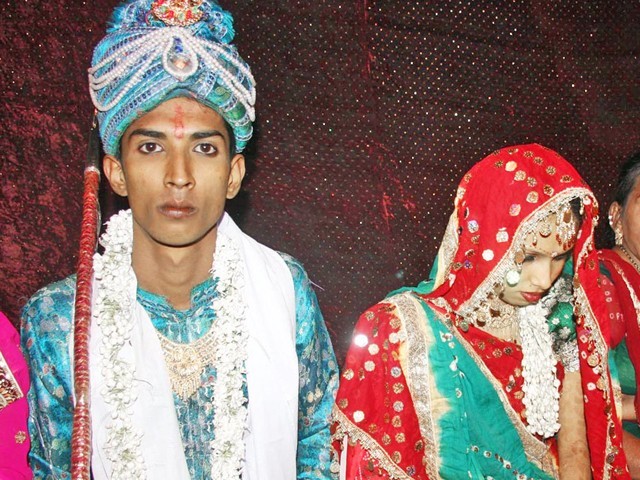 A bride and groom from the Hindu community getting married during a mass wedding at WMC ground in Karachi. PHOTO: ONLINE

A Hindu lady named Perrmessary Mai, aged 45 and mother of four, is the wife of Gomand Gee, and resides in a remote area of District Rahim Yar Khan. In July 2007, she applied for her Computerised National Identity Card (CNIC) after which the National Database Regulation Authority (Nadra) officials asked her to give proof of her marriage.

In this regard she was asked to get attestation from the nazim (mayor) of her area or a Hindu MPA or MNA. As she was not able to get hold of a Hindu representative and the nazim refused to help her based on some personal reasons, Mai failed to get her marital status verified.

As her counsel, I filed a writ petition in Lahore High Court (LHC) in July 2008, and finally in November 2009, the Supreme Court (SC) of Pakistan took a suo motu notice of the case, based on an article published in the Daily Express. Subsequently, in January 2010, she was able to acquire her CNIC on SC orders. This is a country where a woman from a minority community had to wait two and a half years, despite SC orders, just to verify her marital status.

The ordeal does not end here.

In 2001 a Hindu lady, Mrs Guddi Mai, filed a suit for maintenance for her three children and herself against her husband through my law chamber, in the family court. When the husband was summoned by the judge he denied his relationship with Mai and the children. One cannot imagine the catastrophic state that the woman would have been in then.

She couldn’t do anything. There is no registration/documentation of Hindu marriages in Pakistan.

She was then asked to prove her marriage and the legitimacy of her children based on circumstantial evidence. Although she won the case, it left many question marks on our claim, as a nation, of safeguarding the rights of minorities.

According to a recent census, there are 4 million Hindus living in Pakistan. While almost all religious communities have their respective marriages registration rules and certificate of marriages for married couples, the Hindu community remains deprived of this right.

For Muslims, in the year of 1961-62, laws and rules were framed to register the Muslim marriage. According to the regulations, a Muslim marriage is registered with an officially appointed person, called Nikahkhawan who is licensed to issue a certificate of marriage called the Nikahnama.

The Constitution of Pakistan provides ample protection and safeguards to religious minorities without any discrimination. However, Pakistani Hindu couples face a lot of problems due to the non-availability of their certificate of marriages:

A campaign was launched on 2009 by the Hindu community, with the help of certain NGOs, persistently clamouring for their marriages to be registered. The response from the media, civil society and human rights activists was encouraging however the government and political parties remain oblivious to the issue.

A High Court Advocate in Rahim Yar Khan, who is a human rights activist and the • legal consultant on minorities with ActionAid Pakistan. He is also a member of the advisory board of The Jurists, an international human rights NGO.