Afghanistan without Petraeus: ‘Tough days ahead’ 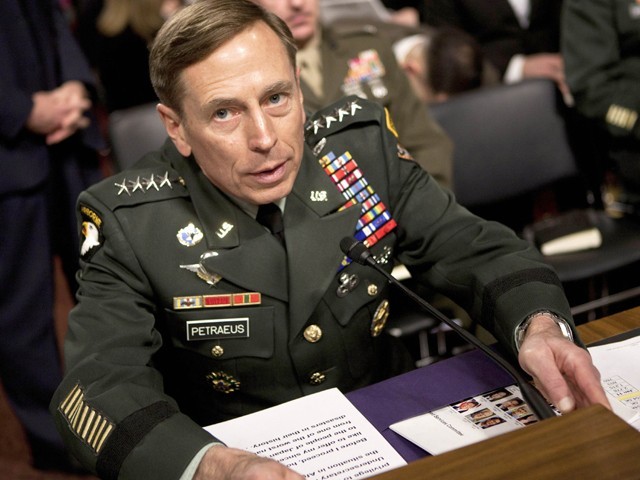 At the moment, it is too early for the jury to give a verdict on Petraeus’s year in Afghanistan. PHOTO: AFP

On July 18, General David H Petraeus handed over command of North Atlantic Treaty Organisation (Nato), the International Security Assistance Force (Isaf) and US Forces Afghanistan (USFOR-A) to his successor, Marine Corps General John Allen. Petraeus had been in charge of military operations in Afghanistan for a little over one year.

According to The Christian Science Monitor the change of command has taken place at “a time of increasing instability” – not a good sign for the Americans who want to hand over the security of Afghanistan to the Afghan National Army (ANA) and the Afghan National Police (ANP) over the next three years.

Petraeus had taken over command on July 4, 2010, after General McChrystal had a fall out with the White House. Violence had been peaking in southern Afghanistan since the last ten years. In order to reverse the Taliban insurgency, Petraeus wanted more troops to repeat his surge strategy of Iraq – to achieve his military objectives, Petraeus had under him some 140,000 US and coalition forces including the 30,000 additional troops. On June 22, as Petraeus’s tenure drew to an end, US President Barack Obama gave out the timetable for the withdrawal of the surge troops – 10,000 troops are to leave Afghanistan by December this year – the units designated for withdrawal have already started moving out.

Petraeus had won considerable praise for his Counter Insurgency (COIN) tactics in stabilising the situation in Iraq. On September 16, 2008, when he relinquished command in Iraq to his successor, General Raymond T Odierno, the then Defense Secretary Robert Gates had praised Petraeus for the “historic role” he had played in creating the “translation of a great strategy into a great success in very difficult circumstances.”

As the chief guest at the handing over ceremony, Gates said he believed:

“History will regard you [Petraeus] as one of our nation’s greatest battle captains.”

He had presented Petraeus with the Defense Distinguished Service Medal.

However, there were no such homilies as Patraeus handed over command to General Allen in Kabul. In his farewell address, Petraeus admitted that although progress had been made, he also warned of a tough fight ahead. He said:

“There is nothing easy about such a fight especially when the enemy can exploit sanctuaries outside the country.”

The US military has been accusing Pakistan for not doing enough to fight the Taliban and al Qaeda-linked militants in the country’s tribal region along the Afghan border. Allen, the new commander also hinted of “tough days ahead” and challenges but said it was his intention to maintain the “momentum of the campaign.” The new commander of the US and Nato forces said he wants to see Afghanistan become a secure and stable environment free from the extremism and terrorism that has plagued the country. During the transfer of command ceremony in Kabul, Afghan Defense Minister Abdul Rahim Wardak had warned against a hasty drawdown of foreign forces.

On the day the command was handed over, there were reports of separate bomb attacks in the country’s south and east, killing four Nato soldiers. Elsewhere in the south, a roadside bomb had killed the police chief of Registan district and three other police officers in Qandahar province. In western Farah province, at least two Afghans were beheaded, after being abducted week before along with at least 30 others for apparently supporting the Afghan government. More than a dozen of the kidnapping victims were subsequently released and the bodies of those beheaded were sent back to their families. A day before, a senior advisor to Afghan President Hamid Karzai and a member of parliament were killed in an attack in Kabul. The Taliban claimed responsibility for the killing of Jan Mohammad Khan, the former governor of Uruzgan province. Khan was killed along with Uruzgan lawmaker Mohammad Ashim Watanwal late Sunday when two men wearing suicide vests targeted Khan’s home in the capital.

The attacks have fueled doubts about Afghan forces’ readiness to take over security control from international troops.

On Sunday, Bamiyan province became the first of seven areas to be handed over during the first phase of the transition, which is expected to be completed by the end of 2014.

It is too early for the jury to give a verdict on Petraeus’s year in Afghanistan, meanwhile he will continue to have a say in the affairs of the country as the new Director of the Central Intelligence Agency (CIA). Leon Panetta, his predecessor, in his inaugural visit to Kabul as the new Secretary of Defense had alluded to the fact that CIA has a large presence in Afghanistan.