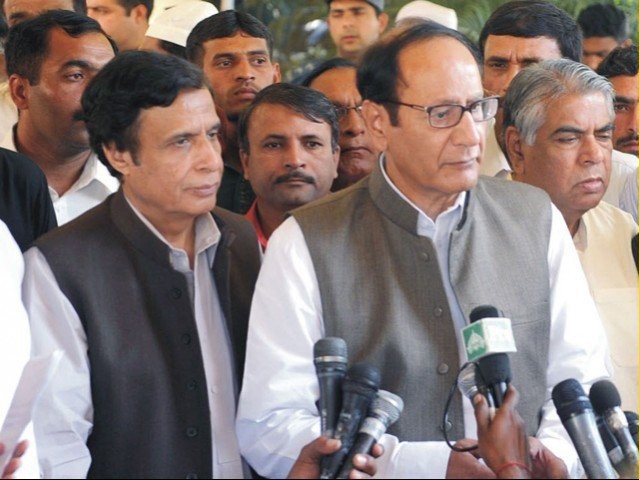 With PTI’s support, Chaudhry Pervaiz Elahi was elected as Punjab Assembly’s Speaker – the province he once governed as Chief Minister and upped to new heights. PHOTO: NNI/FILE

The “king’s party” is back in mainstream politics after a hiatus of almost 10 years. They have done much to rid themselves of this tag since Pervez Musharraf’s downfall. Pakistan Muslim League-Quaid’s (PML-Q) performance in Pakistan’s largest and administratively difficult province, Punjab, has been exemplary during the Musharraf rule, after both supported each other for almost eight years.

After losing strong candidates, PML-Q has seen many lows but remained steadfast and persevered to now make a coalition with Pakistan Tehreek-e-Insaf (PTI). With PTI’s support, Chaudhry Pervaiz Elahi was elected as Punjab Assembly’s speaker – the province he once governed as chief minister and upped to new heights. Despite having only a handful of PML-Q MPAs, the fact that Elahi managed to grab 201 votes is proof of his political acumen.

However, the purpose of this blog is to remember PML-Q’s fantastic development during 2002-2007 and expect the PTI-led government in Punjab to at least reach the same benchmark set by PML-Q in human development, if not surpass it. 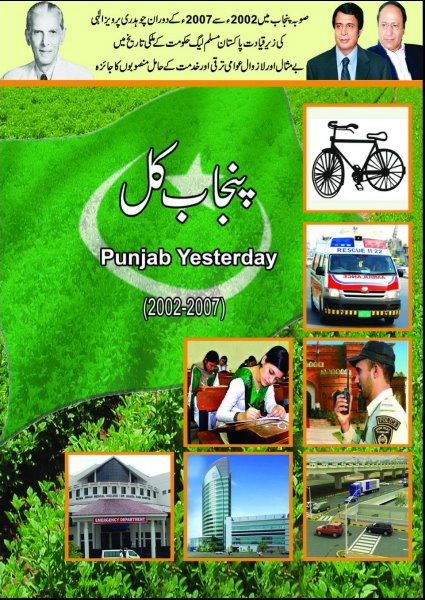 Pakistan did not have a formal emergency response unit before PML-Q’s government and relied mainly on NGOs like Edhi. But Elahi’s government established the Rescue 1122 response unit, which has rescued 1,014,268 patients in Lahore alone. Such emergency response units are direly needed in a country like Pakistan that is plagued by extremism and terrorism, and has been hit by natural disasters like the floods in 2010 and earthquake in October 2005. Rescue 1122 has helped people during fire emergencies, traffic accidents, crime incidents amongst others to save countless precious human lives through their trained staff and state of the art ambulance network. 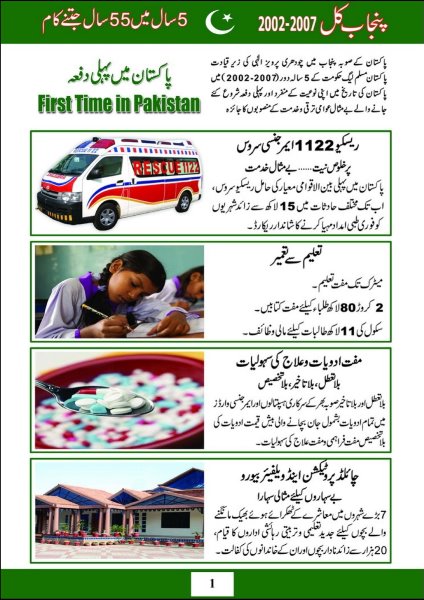 Pakistan has one of the worst healthcare systems in the world. Not only is there a lack of hospitals in urban and rural areas but there is also a shortage of doctors due to brain drain. Gallup Pakistan’s survey found that more than two-thirds of Pakistani population wanted to leave the country and most commonly cited reasons include low salary packages and lack of career prospects.

During Elahi’s government, the government raised healthcare budget by 134.38%. This budget was spent on creating Rescue 1122, and providing free emergency treatment and medications in rural and urban Punjab. One of the problems is getting doctors to agree to treat patients in rural areas as most prefer to stay in urban areas. PML-Q raised the pays of district and basic healthcare staff by 100% which increased the amount of doctors there by 90%. 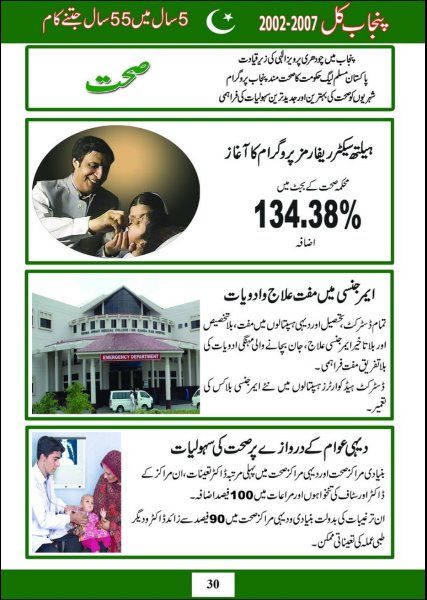 Pakistan has one of the worst education indicators globally and reached a point where 5.1 million children were out of school in 2014, of which three million were just girls. Many children who start school drop out by the time they are nine-years-old, and only 3% of those who study in public schools make it to the 12th grade. Many students are only able to learn little even when they are enrolled because of ghost schools and lack of uniforms and teachers or have little incentive to learn in the face of poverty.

In a patriarchal society where girls’ education is not focused on, PML-Q government provided every student with free books and uniforms, created the first women-only university in Rawalpindi and facilitated female education by inducting new female teachers. Pertinent to mention here is that this is during an era when terrorism was rampant and girl’s education was targeted. 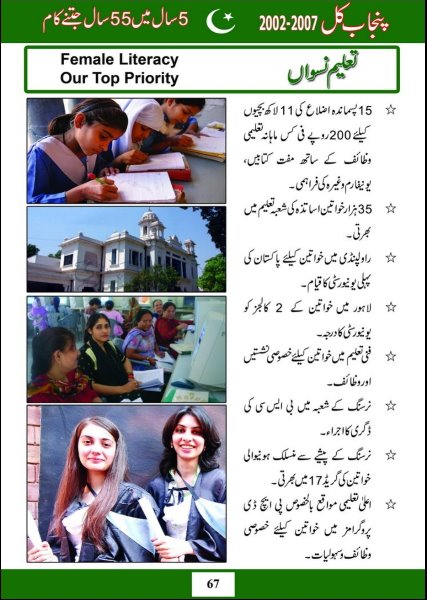 Pakistan was going through a serious wave of extremism and terrorism during 2002-2008 and afterwards. Pakistan Peoples Party (PPP) is considered a progressive and liberal party yet they stayed silent when former Governor of Punjab Salmaan Taseer and Minorities Minister Shahbaz Bhatti were murdered during their tenure. PML-Q, on the other hand, remained their steadfast self as has been mentioned before.

They introduced Punjab’s first ever ministry of minorities and brought about a 300 times increases in the funds for minorities while also providing land ownership to the slums they live in. I personally visited Katas Raj Temple during my visit to Pakistan last year and was told by the tour guide how the PML-Q government tried to revamp and protect it. No wonder a big chunk of minorities voted for them during the 2008 elections. 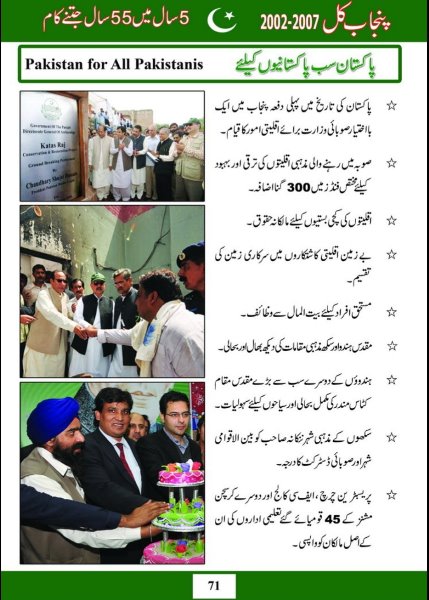 The list is endless. I could write about reforms related to women emancipation, information technology, agriculture, livestock and infrastructural development and so on. However, PML-Q has actually delivered on human development as opposed to parties like Pakistan Muslim League-Nawaz (PML-N) who only have mega projects like metro bus to show. Elahi has proved to be an effective chief minister in the past. I am sure he will be an equally effective speaker of Punjab Assembly and revive his party. Imran Khan’s address to the nation was outstanding, but Chief Minister Sardar Usman Buzdar has very big shoes to fill.