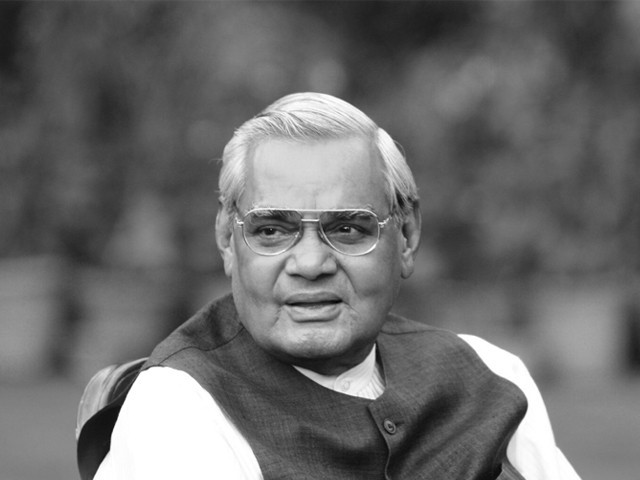 The man paved the way for nationalistic politics as the founding member of Jan Sangh in 1951, and later established the BJP in 1980. PHOTO: GETTY

The demise of former Prime Minister and the Bharatiya Janata Party (BJP) patriarch Atal Bihari Vajpayee has brought an end to the era of ‘statesmanship’ in the country. Vajpayee brought an entirely new dimension to the Indian political scene; the only point ahead of his leadership was perhaps his poetry, filled with a literary richness that would easily put Prasoon Joshi to shame.

Perhaps most importantly, however, Vajpayee was the last dignified fighter in India’s political arena. The man paved the way for nationalistic politics as the founding member of Jan Sangh in 1951, and later established the BJP in 1980. Vajpayee’s fluency, vocabulary and crowd pulling skills won him nationwide popularity, which further translated into the number of votes the BJP garnered.

Vajpayee later went on to become the premier of the country – as predicted by Jawaharlal Nehru – and under his leadership, India successfully tested the Pokhran nuclear missile, emerged triumphant at Kargil, developed closer ties with the United States and commenced a healthy discourse with Pakistan. The Indian economy certainly got a major boost during this period as well.

That being said, Vajpayee’s reign wasn’t entirely devoid of blunders. The 2002 Gujarat Riots occurred and passed without an eyebrow being raised. The visual media back then was not as vibrant as it is now (today most of them are under the government’s payroll). In his capacity, Vajapayee failed to understand the intensity of the situation and nab the perpetrators and the instigators of hate and violence in the region. The Pokhran Nuclear tests didn’t bear any fruit in the long run, as Pakistan tested its own nuclear missile within a year, while India’s nuclear game only ended up bringing violence and terrorism to its front door.

Perhaps the worst decision taken by Vajpayee’s government at the time was the decision to release captured terrorists in order to meet the demands of the Taliban, who had hijacked an Indian Airlines plane in Kandahar in December 1999. Masood Azhar, the terrorist who went on to murder journalist Daniel Pearl in Pakistan, was set free as the government caved in to pressure.

However, comparing Vajpayee to Narendra Modi, as many have done following the former’s demise, is both wrong and absurd. They are both extremely different personalities, with unique achievements under their belts. Vajpayee built the BJP from scratch and made it the second largest party in the country. Modi, on the other hand, is sharper and a crafty politician.

Vajpayee was a popular and admired leader, whereas Modi can safely be termed the ‘populist’ leader. There is, of course, a difference. Vajpayee never promised the moon and the sky, he didn’t bluff that Rs15 lakh would be credited to individual bank accounts while campaigning to a massive crowd. Neither did he allow his party workers to make poisonous and preposterous statements, or make alliances with bankers and fraudulent businessmen, enabling them to elope to foreign lands after duping millions of people.

And yet, Atal Bihari Vajpayee wasn’t more popular than the current prime minister. Why? Was it because Vajpayee spoke the truth and was humbler? He had fans and admirers even amongst the opposition and far-left parties. Many politicians in the Congress party lauded and revered his speeches. During the 80s and the 90s – when BJP was trying to launch itself as the strongest opposition force to the Congress – Advani did all the talking (good, bad, ugly, patriotic and hate-mongering), while Vajpayee was a silent soft-spoken man of few golden words.

Vajpayee learnt from his mistakes, and learnt the hard way. He always considered his oppositions as his rivals and not his enemies. He respected the law and the constitution, and never once went ahead to amend it. He even questioned the handiwork of Hindutva gangs. Talk of a court justice being murdered? It would never have happened during Vajpayee’s tenure.

Vajpayee was an intellectual – he had a Masters degree in Political Science and was a gold medallist. He relished literature and contributed some rich poems in Hindi. He was a knowledgeable politician, one who read and understood not just his country but the world. A mature diplomat of his time, he extended the hand of friendship to Pakistan and other world leaders as well.

Modern-day India has lost its vision. The train of a progressive and a reformed India is off its track on the verge of mayhem. Modi’s government – better known as the jumla government – has institutionalised injustice. Farmers are killing themselves in large numbers, the Dalits are at the receiving end of the worst kind of violence, while the safety of women is at an all-time low. Education has taken a backseat, school text books are being modified towards a draconian ideology, while the history of India itself is being contorted. They say if a nation tries to distort history, history will destroy it. In light of what India is becoming and as we miss what India used to be, there can be no denying that the absence of the great Vajpayee will be felt deeply by one and all. As Atal ji noted in one his poems:

(I will not accept defeat,

I will start the struggle afresh,

I will write and erase my own destiny,

And sing a new tune.)