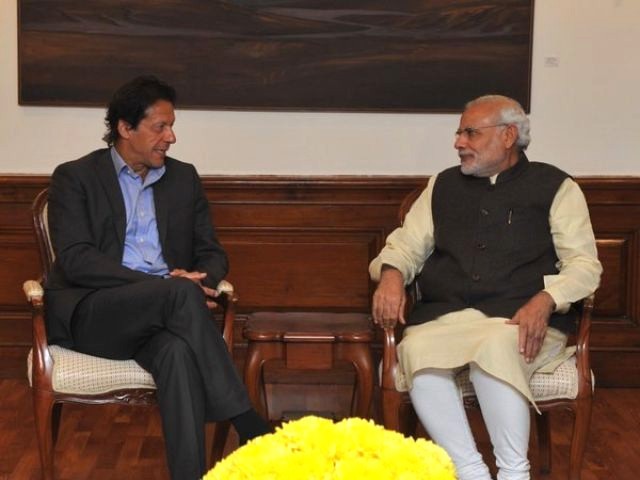 For India, Imran will be viewed on the basis of what he brings to the table. PHOTO: TWITTER/ MEA INDIA

Of all the Pakistani celebrities India is familiar with, Imran Khan has been the most recognisable and for a time, the most popular. As an extremely talented and good-looking World Cup winning captain, Imran has been a byword for leadership and charisma in the subcontinent.

Indeed, in the 80s, Imran appeared in several Indian advertisements endorsing products like Cinthol and Thumbs Up. The improbability of a Pakistani advertising for an Indian brand today points to the tragic deterioration in relations since then, but it also points to the popularity Imran enjoyed among Indians once.

Given this background, one could have expected Imran to be the most popular Pakistani politician among Indians today, and yet it is somewhat surprising that most Indians and the Indian media correspondingly are not enthused by the prospect of Prime Minister Imran Khan. For many Pakistanis of course – especially the youth – Imran heralds a certain change, a ray of hope. The man who scripted Pakistan’s finest moment on the global sporting stage may, by the dint of his leadership qualities and the lucky stars he was born under, change the fortunes of Pakistan for the better.

For Pakistan’s neighbours, however, Imran will be viewed on the basis of what he brings to the table vis-à-vis their relationship with Pakistan. For the last few years, Indians (like many Pakistanis) believe that Imran has the backing of the powers that be. In India’s case, any Pakistani politician with such assistance already starts with a strike against his or her name. For India, the powers that be in Pakistan are the villains of the saga, and therefore anyone they back is also by extension problematic.

What made Imran the “villain” for the Indian media, however, has less to do with what Imran did and more to do with the fact that the media in India is arguably passing through its worst phase ever. It has, with notable exceptions, surrendered itself entirely to the narrative of the Indian establishment. Heroes and villains are born on primetime television with a grotesque competitiveness every night, as middle class families settle down for their dinner.

Imran Khan: “we will have peaceful talk with India & try to resolve the issues with harmony”

In this world of adult anchors screaming like tomcats in heat for an extra slice of attention, there is no room for shades of grey. There is only black and white, and for the purpose of our viewers, a Pakistani has a very slim chance of being a hero by default. He or she may have to be shot in the head by the Taliban for demanding education to be considered one, and sometimes even that does not suffice. Media channels today are jumping over themselves trying to prove they are more loyal than the king, and there is no better way to do this than to yell at Pakistan and Pakistanis vacuously like Arnab Goswami frequently does.

"Why is #ImranKhan licking our boots," asks ArnabTheGoswami, all because he apparently said he wants peace with India?? What kind of language is this on national TV? Disgusting.

" Why is Imran Khan licking our boots ? "

This is what Arnab Goswami said after Imran Khan talked about maintaining peace and harmony with India.

These type of journalists are more dangerous to the country than Terrorists and Naxalites. .

Arnab and gang are highly disappointed that Hafiz Saeed’s party performed dismally in the elections and they have lost the opportunity to rant against Pakistan today. What’s worse for them is that Imran Khan is talking of peace! Peace doesn’t sell as much as hate. https://t.co/eK5kZtofer

If Imran makes a speech that pejoratively paints his opposition to be a friend of India’s, then Imran is the villain India knew him to be. If, on the other hand, he talks about reconciliation, it is said that Imran is petrified of us. In short, there is precious little that Imran can do to elicit a balanced opinion from the drama queens of Indian primetime news channels.

This is exactly what Imran was talking about when, in his post-victory speech, he made the point that the Indian media has “made a Bollywood villain” out of him. The choice of words was apt. Bollywood does seem to be the template of the television media in India. This has been the case since the liberalisation, privatisation, globalisation (LPG) reforms and the entry of private news channels took the ‘L’ in ‘LPG’ to liberally douse their routines with histrionics to get ahead of the game in a country where one of Ekta Kapoor’s saas-bahu shows will always do better than Shyam Benegal’s Samvidhaan.

"I'm sad with the way I've been portrayed by Indian media… As a bollywood villain. I am the Pakistani who knows India best, and I understand the need for peace " : Imran Khan

Well spoken Imran Khan. I have been saying whatever you said on all channels past two days regarding India-Pakistan! I hope you succeed in making your “Mulk” have good relations with my “Mulk” pic.twitter.com/YCe741vW22

When it comes to Imran, there is room for plenty of scepticism and cynicism. He can talk about peace with India and he may even genuinely desire it, yet, it is unlikely he can do anything about it. There are aspects of his politics with regards to the Ahmadi community and the politicisation of the Khatm-e-Nabuwat (finality of Prophethood) doctrine that remain deeply problematic. He has been known to take a soft approach in dealing with the Taliban, and has funded madrassas that are intertwined with the Taliban network. The Indian media can and should make these points with nuance and with a desire to inform the public, rather than with a desire to entertain and widen the already large gap that exists.

In his book The Argumentative Indian, Amartya Sen compared the approach of the noted scholar and historian Al Biruni with the British historian James Mill, in how they understood and wrote about India. According to Sen, Biruni followed what he called a ‘curatorial’ approach to writing about India by presenting as accurate a picture as possible by visiting India and speaking to a host of individuals, and even when presenting a differing point of view from Indian scholars, taking great care to ensure their view was represented with respect and great care. In contrast, Mill followed the magisterial approach to writing about India. He wrote The History of British India without ever having visited India, referring to Indian civilisation as inherently inferior, in need of civilising, and dismissed any discovery or invention attributed to Indians (like the decimal system) as falsifications of cunning pundits in order to fool gullible Indophiles like Sir William Jones.

One gets the feeling that Indian television media is following Mill’s magisterial approach generally speaking, but especially with respect to Pakistan, and now Imran. Mill, however, did not indulge in the kind of histrionics that are a hallmark of Indian primetime TV news. Indian media is today therefore a queer and tragic mix of Mill and Rakhi Sawant – unbelievable in its arrogance, and unbearable in its drama.