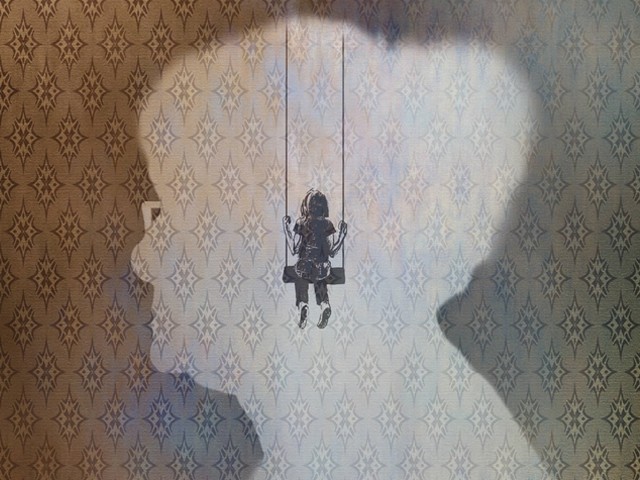 Many nights she’d think about what she would tell her daughter when she grew up and enquired about her father. PHOTO: GETTY

I am an old woman, almost 75-years-old. My bones are weak, my skin is wrinkled, and my hair is a mane of silver. A pile of medicines cover the top of my bedside table. Most days, I don’t feel like eating them.

Death weaves itself around me. I see it everywhere – in fallen leaves, in the rain, in the shadows, in people.

My time here is almost done, but there’s a task still unfulfilled. Before I close my eyes forever, I have to tell my daughter the truth about my life, and her life. I’ve kept it hidden for too long. But it’s time I told her.

Sheherzade could feel Murad’s breath on her face, that’s how close he stood to her. In the moonlight, his face appeared pale and shadowed, almost unfamiliar.

In the glimmering silence of the night, both of them held each other’s hands, not wanting to let go. They were lovers. They were made for each other. Their hearts beat as one.

“Murad,” Sheherzade began, her voice whispery. “I love you…”

Murad placed a finger on her lips to make her quiet. Then he leaned over, and brushed her cheek with his lips.

Sheherzade’s greenish-hazel eyes sparkled, her heart fluttered, and feathery ripples of excitement tickled her insides. In that moment, her world felt complete.

A gentle breeze whispered through, stirring the leaves in the trees. The moon was also disappearing. Sheherzade didn’t want to go back home, but she knew she had to. She stole one last glance at Murad, and walked away.

That night under the smoky sky, both of them promised to be there for each other till the end of time. They were so in love.

Amma wanted Sheherzade to get married. She told her she would find a good match for her. But Sheherzade dismissed all the men Amma had shown her.

It was while Amma searched for suitable proposals that Sheherzade met Murad, and fell in love with him after a few months of insistent courting. He was a tailor who lived in Lahore and occasionally visited the village. He even came home with a proposal, but Amma disliked him.

“Sheherzade, I do not trust this man. I will not let you marry him.”

In those times, to love was nearly a sin. Sheherzade had been daring enough to not just love, but also run away with the man she loved. Amma had known her defiant nature, and told her the path she was treading on would lead to trouble. But her warnings were being spoken into deaf ears.

And now Sheherzade was going to Lahore with Murad on a train.

“Once we are married and living a happy life, I will return to Amma and tell her that I made the right choice,” Sheherzade said sadly. She missed Amma.

“Our happy life lies ahead of this journey,” Murad’s tender words made Sheherzade smile.

As the mountains enclosing the village faded away, her thoughts shifted to what Lahore would be like. She saw her entire life shining before her in a city she had never been to before.

Falak sat gawking at me, her kohl-encircled eyes wide with curiosity. She didn’t know where this was going.

It must be odd for her, learning about the love life of her elderly mother. But if it was only a matter of a small love affair, I would not have told her anything at all.

I do not know if Falak will ever forgive me after she finds out the truth I hid from her. She’s a hard-hearted woman, not very forgiving. But having a daughter of her own, I hope she will understand the lengths a mother can go to in order to protect her child, especially from her own sins.

When they reached Lahore, Murad kept Sheherzade in a small dingy house. It was nothing like what he had described to her.

As the days passed by, the subject of marriage died out completely. It was as if such a promise was never made in the first place.

Sheherzade’s apprehension swelled; she didn’t know what all of this meant. When she confronted Murad, he slapped her. The next thing she knew, she was being tied to a chair every time Murad left the house. He was afraid she might run away.

“Murad, why did you bring me here if you didn’t want to marry me?” Sheherzade asked weakly, barely able to hold back her tears.

A few days later, a man called Hamid appeared at the house and took her away. Murad did nothing to stop him.

That day, all of Sheherzade’s dreams soured in her head. She realised she had trusted the wrong man.

Puffs of clouds shined against an intense blue sky, and a cold piercing breeze swept the street. Sheherzade stood outside the brothel that had tormented her for years. But now she was going away, with a new life blooming inside her. Her eyes brimmed with tears of rage.

Hamid had freed her.

“You’re old and ugly. We don’t need you anymore,” he spat in her face.

With that, Sheherzade’s new life began.

Sheherzade spent many sleepless nights in the bitter cold on the pavements before she finally found work as a housemaid. She was also given a room to live in at her new workplace.

A few months later, her daughter was born. She named her Falak. She had the same greenish-hazel eyes and dusky skin as her mother.

She was also born to her in the darkest times of her life.

Many nights, in the echoing quiet of her room, she’d think about what she would tell her daughter when she grew up and enquired about her father. Especially as she also didn’t know who he was.

“I will tell you your father died before he could see you grow up.”

It hurt her heart to think that Falak’s father would never even know she existed.

My body has shrunken. It’s not what it used to be. My appearance tells me I’m not the same woman anymore. Many times, I wish it was true.

Another part of growing old is that you’re easier to hurt, and more vulnerable to pain. Telling my daughter I had only met her father once in my life made my soul blaze with anguish. I only wish I had told her earlier.

But I didn’t know how to tell her. All I wanted was to protect her from my past, my sins.

Falak’s eyes were aflame with anger. I could see that she was stung. And perhaps disappointed.

A tense silence enveloped us.

“Why did you give birth to me?”

“Because you were my only escape from a life that terrorised me.”

Falak wrapped herself around me. We both cried.

But now the burden is off me. My daughter knows everything she needed to know. And in the course of time, I hope she will forgive me.