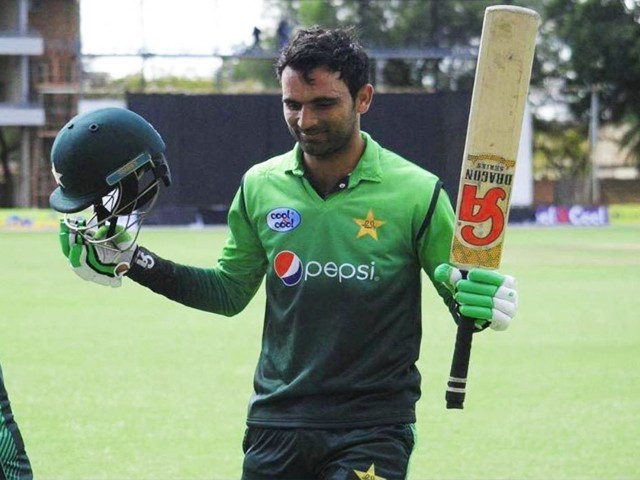 Who would have thought that despite his risk-seeking style of play, he will be the first Pakistani to score a double ton? PHOTO: PCB

Zimbabwe thought they had finally come up with their best plan against Pakistan. After the drubbing received in the first three ODIs, they had learnt it best to keep Fakhar Zaman off-strike. That was their Plan A.

For the first 22 balls in the fourth ODI, Zaman stood at the non-striker’s end watching Imamul Haq try to find the middle of his bat. The weather was nice, with clear skies and just a hint of wind. Zaman seemed to have dozed off at the non-striker’s end, while Haq was busy building his turtle-paced innings. Everything was peaceful. Thus far, Plan A was working perfectly for Zimbabwe, and if this could have continued for the remaining 278 balls, Zimbabwe would have been more than happy.

Unfortunately for Zimbabwe, Zaman came to strike on the 23rd ball. Plan A was a lethal one, but it only lasted for 3.4 overs, after which it was time to move to Plan B. The only problem was that Zimbabwe had no Plan B.

From the 23rd ball onwards, Zimbabwean players and the two umpires on the field were mere spectators dressed up in fancy colours, only to watch the Zaman show.

India had already watched this show on Jun 18, 2017, but they found an escape mid-way as Zaman fell immediately after scoring 100 runs. Zimbabwe certainly played the role of a more respectful audience, as they allowed Zaman to have a complete outing this time around. Zaman smashed his way to a whopping 210, as he became the first Pakistani to enter the double-century club, as they call it.

The argument that Zaman has scored against a weak opposition is ridiculous. A double century takes immense skill and stamina, regardless of the opposition. Those trying to undermine his milestone should try running on the wicket for 50 overs with the whole equipment a batsman has to wear, leave alone actually having the talent to score a double century.

I’m privileged to be in the presence of the world’s greatest clairvoyant; I’ll now check with @iramizraja who’ll win the new season’s @premierleague #ZIMvPAK PS: it may have been one-sided but it’s still a tremendous effort by Fakhar to reach 200. Brilliant… https://t.co/oJT0Ac1ndz

Zimbabwe is certainly weaker compared to other teams, but they are still very much an international standard team – they aren’t exactly comparable to the backyard boys we play cricket with in the streets. All credit to Zaman for playing exceptionally well and performing according to his abilities, rather than worrying about who the opposition is or taking it easy.

Fakhar Zaman you beauty 😍 – What a wonderful innings and what an amazing player! Pakistan's first ever double century in ODIs #PAKvZIM

Congratulations to @FakharZamanLive on becoming the first ever Pakistan batsman to score a double century in ODIs. Proud to have witnessed this sublime knock. Very few batsmen have dominated an entire limited overs tour as he has. #PAKvZIM

Zaman had made his name known for the unorthodox style of shots he plays. He lifts the momentum for Pakistan and sets the tone for the rest of the innings up front. Who would have thought that despite his risk-seeking style of play, he will be the first Pakistani to score a double ton?

They say luck favours the brave. Zaman’s style of play rarely demonstrates him in control of his innings; most of the time he seems a shot away from throwing his wicket. Yet, in midst of all the edges and misses, he manages to survive and keep piling runs.

There was one particular aspect of Zaman’s game that I noticed a long time ago, but it was more prominent today than ever before. He plays selflessly; a sight rarely seen in Pakistani sides of the past. As Zaman got near the 200 mark, I did not see him intentionally slow down his innings even for a single instance.

At 192 runs, with almost five complete overs yet to go in the innings, Zaman could have easily chosen to stroll his way to a double hundred through singles. The runs on the board were more than enough to invite Zimbabwe to bat twice. He was only the second Pakistani player, after Saeed Anwar, who was standing at an arm’s length from the 200 mark barrier, yet he continued to play for the team. At 192, he walked across his stumps and set himself for playing an aggressive shot. He smashed a low full toss towards the leg side for a four.

Well done @FakharZamanLive Superb performance,,To break Saeed’s record needed a special knock #Congratulations This is talent which some think we don’t have in our country..

At 197, with almost three overs yet to go, even I wanted him to start taking singles and forget the team score. Zimbabwe had already put their weapons down; they had no intention of interfering with Zaman’s flow. At this point, only Zaman could throw away such a big occasion by playing a rash shot.

As the bowler ran in, Zaman walked across the stumps again, but this time so much that his leg stump was visible. I felt a rush of blood as he set himself up for yet another big shot. I thought the bowler might exploit his leg stump region, but I had forgotten that Zimbabwe had long left the game mentally since the 23rd ball into the innings. The bowler pitched it on the off-side, and Zaman gave it a big strong heave towards the cover. The ball travelled in the air for a while, but destiny had it written for Zaman to score the double ton that day, so there was no stopping it from hitting the fence.

Fakhar-e-Pakistan has left us with another everlasting memory after the Champions Trophy final. The next target on the list for him is becoming the fastest to 1,000 runs, and we are all rooting for him to get there as soon as possible!