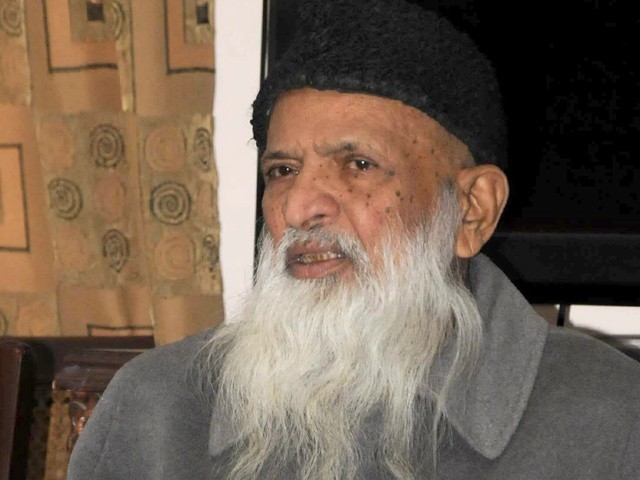 What to say of Abdul Sattar Edhi who recently made a very public demand for a mass killing? PHOTO: RASHID AJMERI

We all suffer from occasional bouts of madness. It is a hazard of being a human, a side effect of possessing a mind. We all have thoughts, wishes that cannot and should not be taken seriously. Mostly, we keep these thoughts to ourselves but sometimes, we blurt them out.

If we are lucky, not many witness our moment of insanity.

What to say then of Abdul Sattar Edhi who recently made a very public demand for a mass killing?

Kill all corrupt political personalities, he has asked of General Kyani. Kill them so that the next generation can step into politics.

The strange thing is Edhi made this call while opposing a bloody revolution.

When I called Mr Edhi’s spokesperson Anwar Kazmi, to confirm the statement he said that Edhi was asked what could be done to improve the situation in Pakistan and he responded with the idea of a six month long martial law during which all the corrupt politicians are to be executed.

I cannot decide what is more disturbing. The fact that he actually called for death, that this call was inspired by the recent violence in Karachi, or the fact that someone like Edhi believes that killing a couple of dozen people is the key to ending violence in Pakistan.

What is it with these calls for murder?

As if the crazy mullah’s weren’t enough for hate speech, now it seems like everyone is joining the bandwagon. Talk show hosts, politicians and now Edhi!

We have been one of the world’s most volatile nations for a while, and now the mania seems to be catching the most unlikely suspects. I have heard demands like this before, but never from someone who celebrates life and humanity.

I understand his sentiment, his frustration, but I cannot understand how someone like him could think the solution lies in the killing of some corrupt individuals.

While I am disappointed by Mr Edhi’s demand, I am far more scared; if people like him, people who have previously helped and served everyone without passing judgments, without discrimination, are starting to think that military action and execution is actually a solution, we are in serious trouble.

For decades a majority of Pakistanis have denounced violence. We have felt proud to be in this country even in its darkest hours and said these terrorists aren’t really us, we are peaceful.  But today the best of us have supported a violent track. I know we don’t need any more violence, but when I go back to the question that made Abdul Sattar Edhi give this statement – what is the solution – I can come up with no answer that doesn’t involve excessive use of power and subsequent bloodshed.

Am I the only one at a loss?