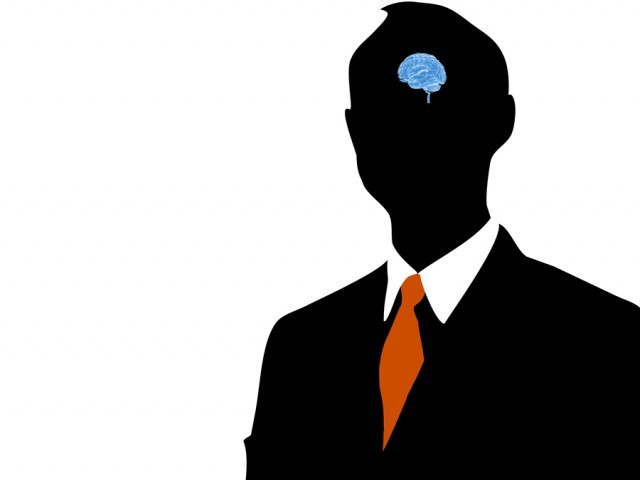 Our banks are filled with insecure men wearing ill fitted suits. The cost of their ignorance is borne by us.

I have been working in a well reputed bank in Pakistan (whose name I will not mention) for the last five years. I have learnt a lot about banking, from credit modules to debt ratio analysis to greeting customers. What I have not as yet been able to understand is how our banking industry’s middle management is filled with buffoons wearing ill fitted suits with qualifications of no more than Bachelors in Commerce (BCom) and brains the size of a bird’s.

Why is this so?

The reason I feel the current state of the banking industry is depressing, is not only because such buffoons make comments like:

“What’s the difference between a BCom and an ACCA in the market? You can get both for Rs15,000 per month.”

But also because they they say:

“Don’t hire her/him, he speaks too much English.”

In budget meetings they say:

“Debit is debit and credit is credit.”

While taking a job interview they proudly say:

The best one is when they try to write emails with their three letter word angrazee.

It is because of these people that a culture based on theory X (a management theory which states employees persistently need to be pressurised as they are all inherently lazy and avoid work if they can) is taking shape at our workplaces. And in order to counter this belief, poor bank employees have started working late unnecessarily (actually they start most of their work after closing times) which affects their health, family life and social life.

When I was once asked to comment on how to improve my banks Human Resource (HR) polices and overall bank policy (which was in a HR survey by some outsourced company) I wrote:

For writing this, my bird-brained buffoon of a manager asked for an explanation. After explaining the whole concept of an open door policy to just, all I heard him got was an “okay.” And, I gave him a free lesson on management.

The inability of these buffoons to tolerate competence and reward it accordingly is affecting us at the national level as well, as our best talent is constantly saying:

Sadly, they are willing to accept junior level positions abroad, just so they can get out of Pakistan and a culture where banking jobs for fresh MBAs are as low paying as the monthly salary of a taxi driver (a strange but true fact which very few people are aware of).

The main reason for such unproductive situations is that these area managers, cluster managers and regional managers have never learnt anything about motivation theories or management theories or planning and budgeting and do not have the academic understanding, which even a fresh out of university MBA has. The cost of such ignorance is borne by us.

I can only pray that once our low level managers take charge of middle management, they do not carry out the legacy of such buffoonery and incompetency, which is currently prevalent in our banking industry.

A banking industry professional who works in corporate financing, and has done a master in economics. He is also currently doing bi-majors in Marketing.