Smoking kills, but so does patriarchy 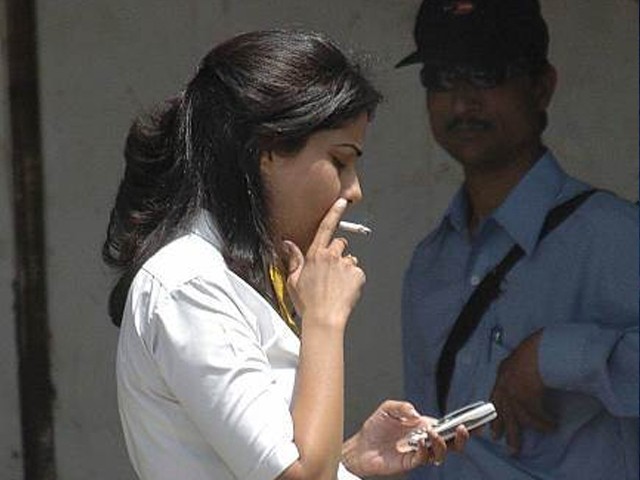 An Indian woman (L) is watched by a security guard as she enjoys a cigarette while looking at her mobile telephone on a pavement in New Delhi, 03 May 2004. PHOTO: AFP

What is the duty of a good brown woman? For most of our society, it’s ‘upholding traditional values’ – whether it’s the ideal bahu (daughter-in-law) in most TV dramas, desirable conservatism in Bollywood dynamics, or unsolicited advice from politicians. A 2017 Ipsos Global Trends report even reveals that 64% of Indians believe that a woman’s primary role is to be ‘a good mother and wife’. This burden of sanskar (values) and dutifulness then become a tool of oppression, of restriction.

On the other hand, men have no such shackles, and end up having a monopoly on the social acceptability of ‘having fun’. There is a systematic curbing of women’s freedom to experience different pleasurable things, from most affordable local bars and wine shops being male-dominated spaces, to mobility being disallowed and/or unsafe for many women, to sex being portrayed as a solely male desire. These restrictions are disguised under the claim that it is against India’s moral fibre and traditional customs of ‘dutifulness’. And this includes smoking.

‘Women should have the right to smoke’

“Are you really fighting for the right to harm one’s body?”

The answer to that is, not at all, no feminist movement aims to damage lungs. The struggle is about the right to choose for your own body, irrespective of what that choice may be.

Smoking kills, this we know. But for several women in urban India, not smoking isn’t always an informed, health-conscious choice. Often it’s not a choice at all, it’s a social construct. And for many who do choose to smoke, it’s a struggle or a secret you’re forced to keep.

From judgmental gynaecologists to the norm that reproduction is the tax every woman must pay for being born, for centuries societal pressure has been waging a war on a woman’s right to decide for her own body – and smoking isn’t any different. Whether it’s the closing scene in Alankrita Shrivastava’s Lipstick Under my Burkha or Lisa Haydon’s portrayal of a ‘free, liberated women’ in Queen, even Bollywood speaks of the emancipatory notion of the choice to smoke.

A report by the Associated Chambers of Commerce and Industry of India (ASSOCHAM) in March 2018 revealed that there is a growing trend amongst young working women smoking in urban cities of India. A similar study by the National Center for Biotechnology Information (NCBI) concluded that their findings “clearly provide a basis to institute gender-based tobacco control policies to stop the rise in women’s smoking rates”. This study called for a specific gender-based policy that was not meant to curb rising smoking rates, but rising women’s smoking rates.

Most reports that speak to the consequences of women smoking have two narratives. One, that it is a grave public health concern since women smoking can affect the well-being of their families. While this is true due to the harmful effects of second-hand smoke, the same is not said of men smoking in such reports. This could be attributed to the fact that a woman’s actions are seen through the lens of family, since they are bearers of children and their primary loyalty belongs to the household, while men don’t have the same consequences.

The second narrative points to the risk of adverse pregnancy outcomes, appealing to the motherhood role of women that should outweigh their choice to smoke. However, health hazards of smoking on men’s sperm count and motility, while a scientific fact, isn’t portrayed as strongly. While these readings of such reports could be chalked off as subjective, the urban space divide is less dismissible.

In most urban spaces, cigarette stalls or panwallahs (betel leaf sellers) are most often male-dominated spaces, from the owner to the shopkeeper to the patrons. The physical occupation of a majority of men in these spaces, which is often accompanied by a straight, cis male gaze, makes it difficult for anyone else to comfortably occupy the same physical space with ease. This is true for gay men, transgender people, women, and other such minority groups.

I personally have been in countless situations of glaring male gaze fixated on me purely owing to the cigarette in my hand, which often also escalates to threatening and harassing comments. This isn’t just an invasion of privacy; it’s terrifying when you’re made to feel vulnerable for a choice you’ve made. This fear is not unfounded, demonstrated by several cases of harassment against women caused by men not approving of a woman smoking. For instance, in 2016, a female student in Kolkata was allegedly assaulted by a group of six men for ‘wearing shorts and smoking a cigarette’. Another eerily similar case with another 23-year-old female student took place in May of 2018.

From men on scooter slowing down past a girl smoking to long-drawn, threatening stares, to people even walking up to women with comments like,

(Girls shouldn’t smoke, it does not suit them.)

Or my personal favourite,

(If she can put a cigarette in her mouth, then she must be willing to put everything else in her mouth also!)

Urban spaces in India are built to keep women from the choice to smoke.

A common classist and caste-ist worldview can conclude that men from low-income backgrounds are the perpetrators of such judgment, but that would be a fallacy. The comments, stares and headshakes of disapproval are brought on just as much by savarna, privileged men who deem themselves the guardians of Indian sanskar. Not to mention other women reinforcing this patriarchal notion, clicking their tongues at such abhorrent behaviour as well.

Torches of freedom and commercial gain

The tone of this article’s narrative suggests that women should have the right to choose for their own bodies when it comes to smoking, but this narrative isn’t new. It has long been a tool for big tobacco businesses to widen their consumer bases.

In the 19th century, big tobacco companies focused their advertising on their consumer base of men. The social stigma around women smoking made their share in the consumer market negligible, and the habit was often attributed to sex workers or women who society considered ‘immoral’. However, George Washington Hill, the President of the American Tobacco Company, saw women as an untapped market opportunity to maximise profit.

In 1929, the company organised a parade of women marching down New York City’s Fifth Avenue holding lit cigarettes that were coined ‘torches of freedom’. This location wasn’t a random choice, and was remnant of the 1915 Suffrage Parade march where tens of thousands of women marched across Fifth Avenue for the right to vote. The similarity drawn between these two marches posed smoking as ‘liberation’ and ‘emancipation’ for women, and the tobacco market grew. 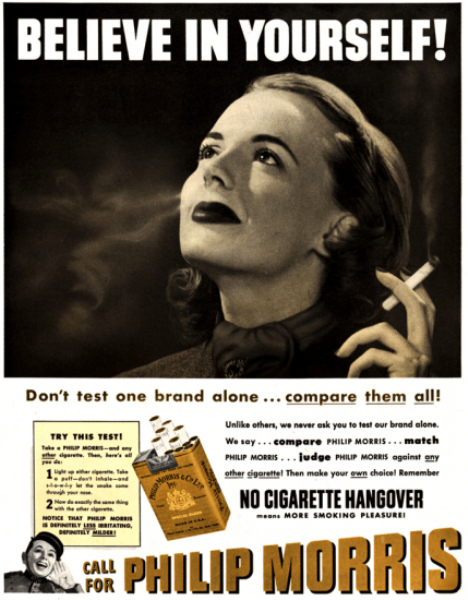 Big tobacco company Philip Morris also rode the wave of feminism to the bank in 1968 with its marketing slogan ‘you’ve come a long way, baby’ for Virginia Slims. This represents a long trend of ‘feminisation of cigarettes’ with product variants that were extra slim, low-tar, low-smell, menthol and so on. And this trend of big tobacco companies using women’s liberation as a marketing tagline isn’t a solely American phenomenon. 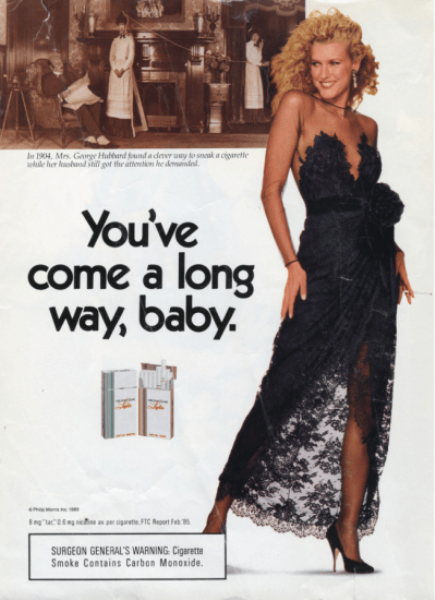 For decades, several Indian tobacco companies introduced women in cigarette advertisements in order to capture that same untapped market. Before the bill outlawing cigarette product advertising was implemented, in April of 2003, Golden Tobacco Company’s new line of platinum cigarettes was launched specifically for women with an insert in the Mid Day titled ‘Understanding Women’. ITC Limited, India’s leader in tobacco, identified women as a market and began to run print advertisements for Gold Flake Filter Kings, which picturised a group of both men and women. Not to mention the famous Wills’ ‘Made for Each Other’ campaign advertising Navy Cut cigarettes with the faces of a happy couple. 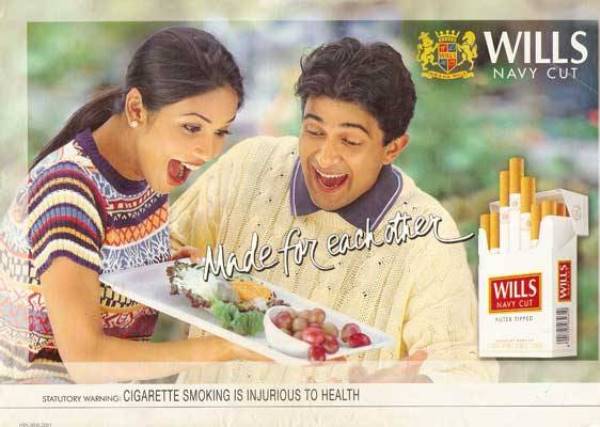 The trend of curbing a woman’s freedom exists across India in many colours and shapes, this is a fact. While the act of smoking itself is not a liberator or emancipator for women, despite what big tobacco would have us believe, the freedom of choice to smoke or not to smoke, is.

This article was originally published on Feminism in India and re-published here with their permission.

The author works for women’s economic development in India with SEWA Bharat, former journalist with NDTV, media graduate from St. Xavier’s College, Mumbai. When she is not working, she is watching comedy sets, reading, playing football, learning lyrics to songs or scrolling down her Twitter feed. Originally from Bombay, currently based in Delhi. She tweets at @rhealmeida (twitter.com/rhealmeida)