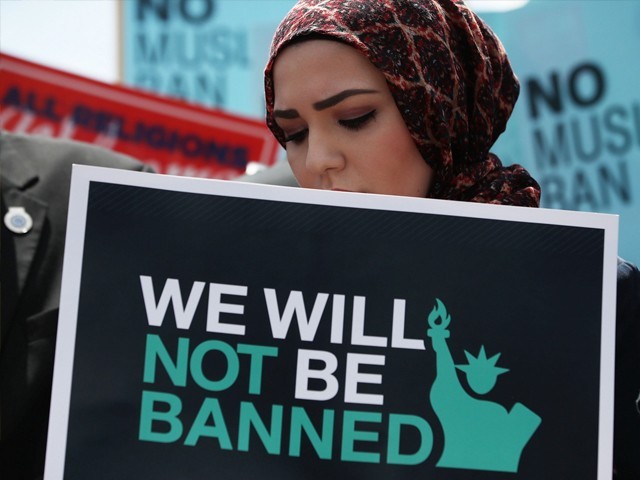 But does such a ban really make Americans safer? Here are five points all Americans need to understand.

1. Religious extremism, not Islam, is the real threat

There is no denying the fact that religious extremists, and terrorist groups like the Islamic State (IS), pose a grave threat to the United States. These groups pervert religion for ulterior geo-political agendas. Their violent rhetoric – advocating for the killing of homosexuals, ‘blasphemers’, apostates and anyone who disagrees with their worldview – has no place on our planet. Period.

It is also unfortunately true that religious extremism exists in certain parts of the ‘Muslim world’. Just a few months back, during a live telecast, notorious Pakistani televangelist Aamir Liaquat Hussain and TV commentator Dr Shahid Masood independently demanded that ‘blasphemers’ and apostates be killed, with no option for clemency.

"Blasphemers & those who disrespect Prophet Muhammad need to be killed" – @ShahidmasoodDr one of Pakistan's most prominent Talk Show Host pic.twitter.com/9ZllbZkBi3

The interpretation of jihad as taught in many madrassas under ‘Saudi’ (our allies) patronage is no less disturbing. The persecution of minority faith groups across many Muslim-majority states also remains a critical issue.

As a Muslim who escaped religious extremism in Pakistan, I have experienced this threat first hand. And this is why, like me, many Muslims – who form the bulk of the victims of terror – are increasingly seeking refuge in safer places. And this is also why we find it inconsiderate to equate our faith with that of our oppressors. It is like confusing the acts of the Ku Klux Klan (KKK) and Lord’s Resistance Army (LRA) for Christianity, and providing the extremists religious legitimacy in the process, when they have none (I discuss this in more detail here).

So, does President Trump’s proposed ban do anything to keep America safe from this threat of religious extremism?

If the idea is to prevent extremists from stepping foot on US soil, here is news for President Trump: they are entering freely. Just two weeks ago, an extremist cleric from Pakistan – Habibur Rehman Ludhianvi – led a rally near Washington DC glorifying ‘armed jihad’, demonising peaceful Ahmadis (for rejecting violent jihad), and condemning America as the ‘land of the infidels’.

How would the ban have stopped him from entering the United States?

How will the ban prevent extremists from bringing their extremist views to the American youth? They have been fundraising in America for many years. Just recently, Maulana Kokab Noorani, a Sunni extremist cleric who has called for the death of Ahmadis in Pakistan, was allowed to address a mosque in Milwaukee.

And how do you explain this one. The White House recently invited a known Taliban sympathiser, Tariq Ali, for a talk. And why does the terrorist sympathiser Tahir Mahmood Ashrafi – who incited the killing of a Pakistani Christian minister and endorses the apartheid of Ahmadis –freely enter the US?

And why are we helpless when a mosque in Maryland celebrates a murderer who gunned down a liberal Pakistani politician for ‘blasphemy?’ And how come no one noticed Sunni extremists rallying for ‘armed jihad’ in Northern Virginia?

3. Foreign policy and military intervention is part of the problem

What produces groups like al Qaeda and the IS? Other than perverted ideology (as discussed above), our own military excesses and flawed foreign policy has a major role to play. The United States played an active role in the creation of the Taliban to neutralise Soviet advances in the Af-Pak region. This was a time when western media praised Osama bin Laden for his efforts for regional peace.

As policy, the US funded madrassas that brainwashed kids into becoming militants. The first time the word jihad appeared in Afghan primary school curriculum was during the Soviet war. The books? They were printed in Virginia, USA.

Then, we attacked Iraq in an illegal war that took close to a million innocent civilians. Imagine the city of Baltimore being wiped off the face of the earth? It is no surprise that the terrorists found easy recruits amidst the misery and pain we left behind, and were able to organise into terrorist groups like the IS. We still did not learn. To topple yet another regime, we armed and funded ‘moderate rebels’ in Syria. Turned out they were more rebellious than we thought.

In Pakistan, the US State Department recently sponsored an extremist Sunni group that used the funds to glorify blasphemy killings in the country.

In short, our foreign policy is short-sighted and flawed. It has only helped create terrorists and radicalise youth around the world over the last many decades. Any sincere effort towards national security must therefore involve a discussion on our foreign policy.

The travel ban does no such thing.

There is no evidence to back the claim that refugees pose a threat to our security. Like me, the United States is home to tens of thousands of refugees who collectively contribute to a stronger nation.

The United States has always been known for its compassion in resettling refugees from around the world, a reputation that is now at stake. It is unfortunate that the Middle East is torn with war, thanks partly to our foreign policy blunders. How inhumane of us then to turn our backs on the most vulnerable victims of terrorism?

The United States already accepts a very small fraction of refugees compared to European nations, Turkey, Jordan, Lebanon and so on. Now, even these very few have been put on hold, and the cap lowered by more than half. This is an embarrassment, especially given the fact that no refugee from the countries listed in the ban has ever committed an act of violence in America.

Here is a good analogy to understand the absurdity of the travel ban. Imagine the United States preventing Jewish refugees from coming to America after World War II for fear of Nazis getting in.

Never mind, stop imagining. We did that too.

5. Domestic terrorism is the bigger threat

While international terrorism is a real threat, what is President Trump’s administration doing about the bigger threat we face here at home? Based on a survey of hundreds of law enforcement agencies, the Triangle Centre on Terrorism and Homeland Security recently reported:

“Law enforcement agencies in the United States consider anti-government violent extremists, not radicalised Muslims, to be the most severe threat of political violence that they face.”

Recently, a Christian minister hatched a terrorist plot to attack Muslims in Upstate New York. “Crusaders” in Kansas plotted to blow up an apartment building popular with Somali Muslim immigrants.

Of course, you don’t hear about these terror plots on mainstream media. Nor did you hear about the tens of mosques that have been the target of arson across the country since January.

A 69-year-old right wing terrorist, who shared fake news articles about Muslims, plotted to carry out a mass shooting on a mosque in Florida.https://t.co/exttXrSaot

Like racism and Islamophobia, antisemitism is also on the rise. Numerous Jewish cemeteries have been vandalised, and over a 100 Jewish Community Centres (JCC) have received bomb threats. Sadly, this rising threat by neo-Nazi groups is largely ignored by President Trump’s administration.

It is easy to ban refugees running away from terrorism and try to look tough. But if the president is really serious about ensuring American security, he must stop religious extremists – not their victims – from free access to America, end our continued military policing of foreign lands, and acknowledge the increasing threat of domestic terrorism.

Short of this, creating a false sense of security with the travel ban only makes us more insecure.