At least now we know what Ahmad Shahzad has been smoking! 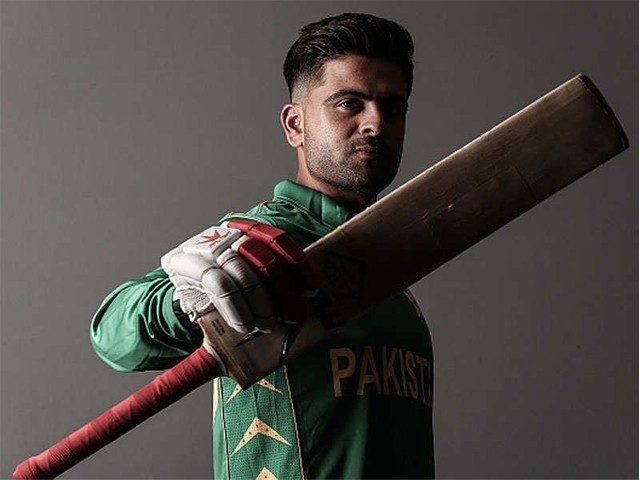 Ahmed Shehzad of Pakistan poses during the portrait session at the Malmaison Hotel on May 26, 2017 in Birmingham, England. PHOTO: GETTY

During the series against World XI last year, I wrote on Ahmad Shahzad. Roughly nine months have passed and here I am writing about the same person again. He was playing selfishly back then and now he is allegedly playing with substance abuse.

The Pakistan Cricket Board (PCB) has not officially stated the name of the cricketer involved in the doping test, however, they have confirmed that there was someone who tested positive. Reports have been surfacing that this “mystery man” is Shahzad. To be honest, it would not be a surprise if this turns out to be true. Not much will change with this, except that Shahzad would have found a new way to disappoint us all.

T20 was the only format Shahzad somehow managed to crawl his way back into after being dropped out of each format in turns. How was he able to earn a comeback to the T20 squad is a mystery in itself because we saw no improvement in him whatsoever since the last time he was dropped. Nevertheless, even his place in the T20 lineup was hanging by the thread but it couldn’t hold onto Shahzad’s mishaps any longer after he allegedly tested positive in a doping test.

The only positive thing about Ahmad Shahzad. https://t.co/3uaJe3qJzW

The substance has not been confirmed as yet, however, some speculations claim that it was marijuana. Even though it is pretty shameful to see Shahzad reportedly indulge in such activities, his abysmal performance on the field probably still ranks higher in the shameful category.

Ahmad Shahzad has been tested positive for Marijuana – the test was conducted prior to the Scotland series during Pakistan Cup.

I would still credit Shahzad for his creativity. It takes a genius to find a new way of getting dropped after his millionth comeback. Those impressed with Arnold Schwarzenegger’s ability to come back to life in Terminator have surely not followed Shahzad’s comebacks into international cricket. The immortal nature of Shahzad’s career in the national side would even put Schwarzenegger to shame!

This time Shahzad thought it would be nice to mix things up a little. Getting dropped due to lack of performance is too mainstream. He did that already time and again without facing much trouble for finding his way back in. Allegedly consuming substances that he has full knowledge of being prohibited was far more appealing to him.

No wonder Shahzad’s initial shots were missing the fielders in his last outing. Usually, he plays an extravagant shot only to find the fielder within the circle with utmost precision. The drug effect probably helped disturb his accuracy in finding the fielders.

We should give every man of the match award to ahmad shahzad from now, for not being a part of the team.

On a more serious note, if this is true, Shahzad hasn’t only let the nation down but himself as well. Like Umar Akmal, Shahzad never did justice to his talent. He broke into the side at a fairly young age, played some picture-perfect shots and impressed us all in no time. Then he got compared to Virat Kohli. It all went downhill from there onwards.

Besides trying to mimic Kohli’s look on the field, Shahzad never reached the same heights of success. The comparison with Kohli started off in real terms but turned into a joke soon after. Shahzad was still struggling to hold onto his place in the team by the time Kohli was captain of the Indian side.

Each time Shahzad got dropped from the side, the expectations were that he would work extremely hard to get one more chance at living his dreams.

nothing unites Pakistanis as an Ahmad Shahzad dismissal

The rumoured use of marijuana leaves doubts over how serious Shahzad is about his own dream. Maybe Waqar Younis wasn’t far off when he mentioned that he “worked hard on them but unfortunately the passion is not there” when referring to Shahzad and Akmal in his report prior to resigning as the head coach.

How can an individual indulge in any activity that carries the risk of being banned when he is already on the brink of being left out in the team’s future plans?

Words on AHMAD SHAHZAD & UMAR AKMAL by #WaqarYounis in his 2016 report:

"Cricketing passion is missing. They need to realize that cricket is not just about making money or business. Its about passion. They think about too many other things but not about cricket."🏏 #DopeTest

Younis might not have left fond memories as a head coach for Pakistan but his final comments on Shahzad and Akmal were spot on. Shahzad’s lack of remorse over his unfulfilled potential is evident. Instead of cherishing each opportunity he got to play in the national team, a dream for millions in Pakistan, Shahzad has put little thought over being banned from international cricket when he apparently consumed the substance that had “prohibited” written all over it.

This could possibly be the end of the road for Shahzad’s career, although, I won’t bet a penny on him for not making a comeback. The love story he has shared with the PCB selectors has been a loyal one. He could be back in the squad the very day the ban is over.

However, for Shahzad to reach his full potential, he must be forced to toil hard in domestic cricket. I know he is the favourite child of the selectors for a long time but if Fawad Alam can rot in the domestic circuit for years despite performing, then Shahzad can certainly spend some time learning to value the golden opportunities life has presented him.

Ahmad Shahzad is tested positive for marijuana. Although it seems like a bad news but believe me this is the best news for Pakistan cricket.

I wish I could write about the loss Pakistan would have to bear by losing Shahzad but he made sure in his entire career that it will never be the case. An average of 26.4 in T20s and 32.5 in ODIs mean we won’t be missing out on much.

For Shahzad’s sake, if he is banned, I hope he uses the time off to do some soul searching. It’s never too late to fix your mistakes within the same lifetime.

On the bright side, looking at his performances now, we won’t be screaming “what are you smoking?!” at our television screens. He might have cleared that up for us.