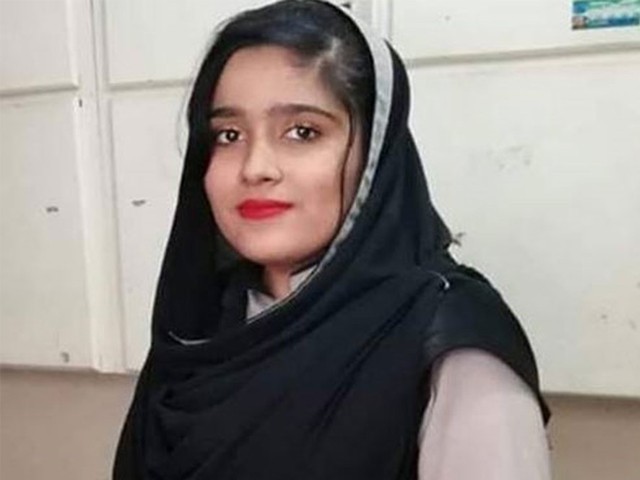 She was killed, murdered in cold blood by a security guard who by profession had sworn to protect. PHOTO: FILE

“O Mother! Hold me in thy embrace,

For it is where no scoundrels roam; ‘tis the safest place,

Come wipe my blood away and clutch me to your chest,

I toiled the day away and now I wish to rest…”

Last year, on our way to Lahore, my mother and I chose to travel through a private transport company bus. A young girl in her early 20s welcomed all passengers on board and started serving people food and drinks. A few minutes later, a group of boys boarded the bus and started signalling to the hostess. Their constant catcalling and bothersome behaviour was extremely outrageous, and while the young girl tried to keep her cool, it was evident how difficult it was for her to simply spend a dignified day at work.

What was it in her job description that entailed the despicable behaviour that she was subjected to?  Was it because she was a bus hostess? Is it a “bad” profession? Perhaps it was simply because she was a woman and she had stepped out of the safety of her home to earn for her family.

It was disgusting, but what happened earlier this month to a 19-year-old in Faisalabad is even more heart-wrenching.

Yes… she was killed, murdered in cold blood by a security guard who by profession had sworn to protect. While the irony here is not even remotely amusing, the poor girl was trying to support her family. Arshad can be seen in the CCTV footage of the incident where she stands her ground in front of her murderer who grabs her arm. She yanked it away and he shot her on the spot. What this horrible incident represents is not one but several dilemmas of the present society.

A poor Bus hostess shot dead for refusing a proposal. What is happening to the society, have people gone insane? pic.twitter.com/84002U7ji4

To the grieving mother, it brings not only the irreparable loss of her innocent daughter’s life, but also the crushing burden of starvation and poverty. It also rang the alarm bells for all girls working in this profession. It is no longer safe for young women who are constantly struggling for opportunities of employment. This harsh act of a cold-blooded murder indicates the disregard for human life but also depicts how no importance is attached to the hard work of the victim in question. If Arshad decided to work to help support her family, she also reserved the right to choose who she wanted to marry, or refuse in this case. By robbing her of this right and her life, the example that the murderer has set for the scum out there like him, is a dangerous one.

Punjab’s caretaker Chief Minister Dr Hassan Askari took notice of the case and called in an inquiry of the matter. The man, Omar Daraz, has confessed to killing her and is behind bars at the moment. But honestly, haven’t we heard all of this before? They take notice, they find the guy and then put him in jail. The next day another girl dies at the hands of a different perpetrator. What is it then that we should be tackling? What is the solution to this problem? Because clearly laws, prison and courts are not scaring these murderers.

The killer may be behind bars, but so will be the women; behind bars put in place for their “own safety”.

What needs to be understood here is not only the thinking behind this murder but the mindset of the people in general in our society towards working women. It may seem like an oft-discussed issue but until it is remedied in a proper manner, it cannot be written off. Working women in our society, especially those without close male relatives are often considered an easy target for harassment and intimidation. As a consequence of such sick and dangerous behaviour, fathers, brothers and husbands feel it isn’t safe for the women of their house to work, which consequently leads to a tighter income and an increased level of satisfaction in women who stay home and remain unable to achieve any intellectual gratification.

It will be harder to convince people after such an incident to allow the women in their families to work outside the walls of their homes than it was before. But what of those who have no other choice? There are many out there who have no choice if they wish to feed their families. For the sake of those struggling women, we need to raise better men. We cannot cage our women because men can’t seem to control themselves. Women have every right to be outside, earning or doing whatever they want without the fear of being harassed, kidnapped, raped or murdered. We have too many harrowing examples of blood and tears rampant in the society which often feature innocent women as victims. In order to turn things around, we need to fix the male attitude in our society. Otherwise, many more like Arshad will continue to be robbed of their precious lives.