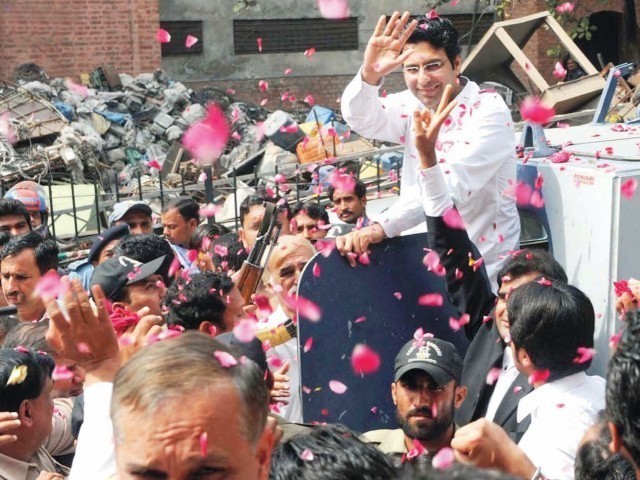 Join a party, link yourself to the powerful, and your fortune, no matter how you've made it, would be legalised. PHOTO: INP

So, the interior ministry has pulled yet another stunt with Additional Director of the Federal Investigation Agency (FIA), Zafar Qureshi. We can now officially say that the Pakistan Muslim League-Quaid (PML-Q) has started reaping the benefits of joining the Pakistan Peoples Party (PPP) led government coalition.

His party is now aligned with the professionals and he can be sure of the fact that the corruption charges levelled against him will probably not translate into a conviction.

As usual, cleansing Elahi’s image has required sacrifice from those who believe in principles. Qureshi, the lead investigator of the case has found himself in the doghouse yet again, after he allegedly refused to sit back quietly till the charges on Moonis’s involvement in the NICL scam are discredited.

Qureshi has been in the line of fire ever since he linked the scam to Junior Elahi and actually dared to take him into custody for further investigation.

Poor, delusional Qureshi, actually thinking that he could hold a potential candidate for prime minister accountable!

The PML-Q is not about to let the future prospects of dear old Moonis be tarnished by an actual conviction. Mr Qureshi should have known that his record breaking recovery of Rs1.75 billion in the NICL scam does not matter when it comes to our ruling elite.

A typical Pakistani politics drama ensued. The lead investigator was suddenly transferred to the National Police Department before the investigation finished. The Supreme Court, continuing its bid to go after all powerhouses, stepped in to ensure that he was reinstated at his position. Again, in another dramatic twist, court orders were immediately neutered by the transfer of four key members of Qureshi’s team to different provinces. The second suspension came in the wake of his application to restore these four FIA officials.

There hasn’t been anything subtle about the way this case is being handled – no delicate clues, no delicate hints to back off. The government seems to be devoid of any fear of persecution, and has continued to disrupt the investigation on each and every level.

As is the norm now, the Supreme Court has stepped in yet again and has summoned the Attorney General to present a complete record of the suspension. But, as the court battles it out with the bureaucracy, the government continues its blatant efforts to skew the investigation. The case has taken more dramatic turns as key witnesses have changed stories and have even denied ever giving a statement to FIA.

This case is fast becoming a perfect example of how justice is ‘managed’ in Pakistan’s political circles. Sadly, there is nothing new in this whole scenario. Just new characters playing out the same old story that rules the way Pakistani politics is played.

But maybe we should look for the silver lining.

Who says Pakistan doesn’t have opportunities?

The only thing you need is to be associated with the right people at the right time.

So, forget principles and forget merit. Don’t worry about making a fortune in a legal manner. Join a party, link yourself with the rich and the powerful, and your fortune, no matter how you’ve made it would be legalised – for that is the way of Pakistan.