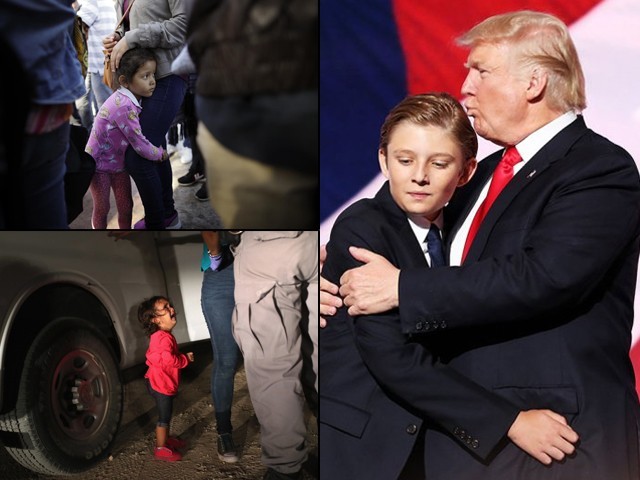 Sources also say that the administration has given a heads up to military bases across the country to be ready to house 20,000 kids on premises.

This could not have come at a more appropriate time. “I really don’t care, do u?” That was the message on the back of Melania Trump’s jacket when she visited a children’s refugee camp yesterday.

This message essentially summed up the way things have turned out for the miserable citizens of the South and Central American countries running away from gang violence, rape, torture and police brutalities in their own respective countries and seeking shelter in the US. Some of them even travel thousands of miles on foot in their endeavour to cross the Mexican border into the United States for a safer and better future in the “promised land”.

Beyond the establishment of the Japanese internment camps, what started as a policy of deterrence in the early part of this year to keep migrants from crossing the border turned out to be the greatest mass human rights violation ever committed by the US on its own soil.

With kids literally ripped from their parents’ arms as soon as they hit the US-governed bordering areas with Mexico, Donald Trump, the scrooge that has befallen on the US, has destroyed thousands of lives. All of this is just so he can prove to his “fan base” that he stands strong on the position of national security issues. His proxy of strength in the form of harshness has only complicated the migrant issue and doesn’t speak to the basic sense of humanity.

You have to understand that Trump literally feels nothing at all about those small children separated from their parents, crying and feeling terrified. Where his heart and conscience ought to be, there is only yawning infinite emptiness.

After weeks and days of acting stubborn, blaming the Democrats for enforcing bad immigration laws and denying that he had anything to do with the draconian policy of putting innocent people in cages and separating children from their families, Trump caved in to public pressure to sign a symbolic executive order to supposedly stop tearing apart families at the border. Of course, this was yet another publicity stunt that he had to pull and show people that his heart cries for suffering families.

Children…babies are still in internment camps. There's no plan to reunite them with their parents. They've been imprisoned indefinitely. It's not only cruel and unnecessary, Trump did this to rev up his cult base. He's still doing it. He'll keep doing it. He's using children.

Beyond the June 20th executive order, there is a perception that things have changed and that families may perhaps be united. Trump says that the separation policy has been reversed. The fact of the matter is that the worst may lie ahead. As things stand today, thousands of children have lost their parents and vice versa. Kids as young as two-months-old are scattered all over the country and are locked in caged detention centres and temporary housings, while their parents rot in prisons devoid of basic necessities of life in excruciatingly hot and most inhumane conditions.

There is no sense of urgency or desire to work for their unification. An inside source informed yours truly that law enforcement agencies work off of two separate databases – one for the parents and the other for the kids, and have no link whatsoever. The result: there is no way in the world that separated families will ever get united. Those families and those kids’ lives are ruined for all times to come.

President Trump has created total chaos. The administration has admitted it has no plans to reunite the more than 2,300 children taken from their parents. These families were torn apart without any idea how they would be put back together. #FamiliesBelongTogther

The haphazardness of the immigration policy can be judged by the fact that while the federal authorities were moving migrant kids to different parts of the country, state governors were neither informed of the number of kids transported to their states nor were they told about the locations of the detention centres. And now they are hitting back by suing the administration.

As chaos and confusion reigns supreme in the White House, no one really knows who is in charge. Elements in the administration like Steve Miller and John Kelly – two of Trump’s closest advisors – who initiated this entire fiasco of the zero tolerance policy, have no clue how to do damage control or rectify the irreversible impact that they have done to thousands of families. They probably simply don’t care.

It is rather ironic that the guy who claims to be the master of making deals has failed so miserably to navigate matters in a disciplined manner. Trump makes decisions on the fly and people are now wondering if we really should give a pass to the highest office holder in the land who constantly says things that are not true. The artlessness and the absence of statesmanship that he so remarkably demonstrates incessantly has even prompted former first ladies like Laura Bush and Michelle Obama to question his judgment.

Right now, no one can trust the Trump administration. Concerned citizens, who want children to be reunited with their parents, doubt if the zero tolerance policy has really stopped, especially the way Jeff Sessions (on May 7) and Trump himself later on (June 19) openly stated that this was a policy to deter any further migrations.

While Trump enforced an immigration policy that has no precedent in modern history, there is no clear path for reunification of 2,300 or so children with their parents. Sources also say that the administration has given a heads up to military bases across the country to be ready to house 20,000 kids on premises.

While one understands fully well that civility exited the US political system as soon as Trump became the president, the quality of dialogue and discourse has hit rock-bottom. There are no scruples left and as Trump gathers steam to run for the second time, his cronies are ensuring this country continues to decline into an abyss of its own making and not even sparing poor and helpless kids suffering from chronic ailments in the process. Trump’s impulsiveness and repugnant attitude has had a contagious effect on all of us.

First, Trump created a crisis by repealing DACA, and threatened to deport DREAMErs if he didn’t get his wall.

Next, he created a crisis by separating children from their parents, and held them hostage.

This nightmare isn’t over. And it won’t be over until his presidency is.

The Trump fans who brainwash him every day want undocumented immigrants to be treated like dogs and thrown in cages. They claim that illegal immigrants are instrumental in committing the worst kind of crimes. The facts are totally the opposite. These types of false claims are only meant to dehumanise people for no fault of their own.

As we all struggle to figure out what the First Lady was saying or thinking, the words on the jacket specifically seemed to have overshadowed her trip. Melania was being touted as the voice of sanity and the force behind her husband’s decision to overturn the zero tolerance policy. After Brownsville, Texas, this does not seem like the case. Her $30 Zara jacket only stated the obvious – the naked and afraid; the hopeless, helpless and desperate men, women and children trying to cross into the US, bare feet and with no clothes on their backs, are not human and hence, they deserve to be treated accordingly. This is the truth and there can be nothing more transparent than that. As they say, it is what it is.