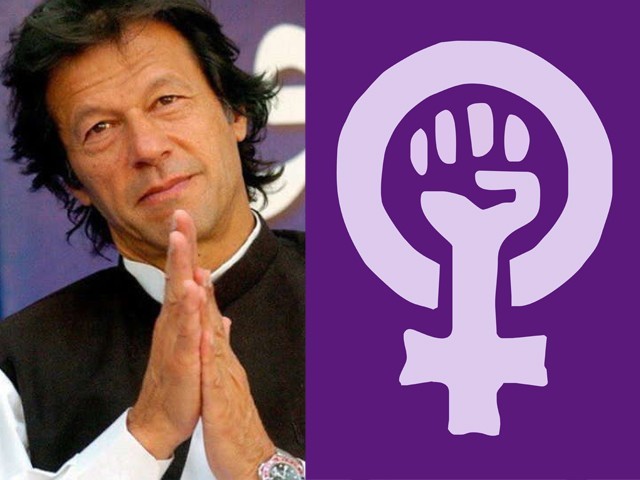 From Imran’s comments, it’s pretty obvious that he doesn’t know – or knows extremely little – about what feminism actually means.

“I disagree with the feminist movement that has degraded the role of a mother,” said Imran Khan.

That was my initial reaction when Imran’s words flashed on the news website. I blinked in confusion and re-read the words, thinking I may have misread them due to tiredness or lack of sleep. But no. There it was, as clear as rain – feminism apparently “degraded” motherhood.

The feminism movement in the West has 'degraded' the role of a mother Imran Khan? Really?! #PTI pic.twitter.com/UwIpEeADil

Like most people who took to social media to protest how shocked and disgusted they were, I sighed in frustration and rolled my eyes at the mere ignorance of this man and decided to write this piece. Imran is a former cricket captain and has now turned into a politician, and has this “divine” interpretation of a vision of a ‘Naya Pakistan’ where the government will be cleaned up in 100 days, millions of jobs will be created in five years’ time, along with world-class schools and hospitals being built.

Never mind the big plans for Naya Pakistan, Imran. Pick up a dictionary, look under F for the word feminism and fix your ignorance!

“The advocacy of women’s rights on the ground of the equality of the sexes.”

“A range of political movements, ideologies and social movements that share a common goal: to define, establish and achieve political, economic, personal and social equality of sexes”.

Feminist movements have campaigned and continue to campaign for women rights, including the right to vote, to hold public office, to work, to earn fair wages or equal pay, to own property, to receive education, to enter contracts, to have equal rights within marriage, and to have maternity leave. Feminists have also worked to ensure access to legal abortions and social integration, and to protect women and girls from rape, sexual harassment and domestic violence. Changes in dress and acceptable physical activity have often been part of feminist movements.

The feminism movement in the West has 'degraded' the role of a mother- Imran Khan.
Does he realize he just insulted Jemima? His Western feminist ex wife who is doing an amazing job bringing up their kids.

From Imran’s comments, it’s pretty obvious that he doesn’t know – or knows extremely little – about what feminism actually means. Born, brought up, living and working in the UK, I’ve experienced some of the aforementioned privileges that feminists have worked tirelessly hard to achieve. I was able to vote as soon as I turned 18 and had a voice about how things ought to be run in politics and in my country. That was due to the suffragettes – feminists who worked and struggled hard to earn us females that right.

Feminism is literally what secured paid maternity leave for mothers in most of Europe and the world (so they could better care for their children), but I guess it's more useful to spout ignorant anti-feminist rhetoric to pander to your conservative base. https://t.co/bLaUxXWxVN

I am able to own property in my name and receive an education just as much as the men do, and that came along due to the feminists’ hard work in the English law. I am able to enter contracts and have equal rights to my partner within a marital relationship because of feminism. Most of all, I was able to take a year off work – and get paid for it as well – and go on maternity leave so I could spend time with my child and care for her. And that was due to feminism!

#Feminism has never looked down on motherhood. Feminists have worked in every country to create paid leave and laws to protect mothers & safety nets so mothers dont leave work to care for kids. Educate yourself #ImranKhan @ImranKhanPTI

So, how on earth is feminism “degrading” to a mother when things like maternity leave were made possible because of this very movement?

To all justifying @ImranKhanPTI comments:
1. Do you really understand the global movement of feminism you hate so much?
2. What makes you think that only Pakistani/muslim women can be good mothers or as IK said واقعی ماں ?
3. Why do you think Gender is not a political issue?

Ironically, as he claims that feminism is ‘degrading’ mothers, his comments are degrading to women (not just mothers) and everyone who dreams of a world where men and women are equal. Dreams of equality do not damage humanity. What is, however, even more degrading is that this same man also opposed the Protection of Women Against Violence Bill along with his party, the Pakistan Tehreek-e-Insaf (PTI). Someone who so openly demonised a movement that has always safeguarded the rights of women has also played his part in further deteriorating the status of women in Pakistan. Should women not be protected if they are suffering abuse and violence? Is that not against motherhood?

If Imran Khan thinks motherhood is the most cherished and valuable role for women, maybe PTI could’ve worked to make life better for mothers and not opposed the 2016 Protection Against Domestic Violence Bill so much.

As a Pakistani girl, I have witnessed many accounts of violence where women are vulnerable to abuse. A man who dreams of creating a ‘new Pakistan’ by creating jobs, schools and hospitals could begin a ‘new Pakistan’ by doing the right thing and avoid ‘degrading’ attitudes and words such as these.

If Imran’s words have established anything, it has confirmed that he isn’t the right person to comment on feminism and womanhood. It just goes to show how much more development his mind needs to go through before he can develop the maturity and the intellectual ability to comment on things like motherhood. Just because he can talk a ‘good talk’ – like a typical politician – doesn’t mean he has the right to make insulting comments like these.

Imran Khan's views on feminism show his utter lack of understanding of the issue. He should ensure he is better briefed or not speak on issues he has little knowledge and awareness of.

Imran Khan: feminism sucks
Logical people: no it doesn’t
Woke insafis: but u didn’t understand kaptaan omg no he’s not a misogynist he’s just misunderstood u don’t get it why did u say this why you hate Imran that’s why ur saying this aren’t u ok yes maybe feminism also sucks.

Before making huge assumptions about ‘feminism’ and how ‘degrading’ it can be, people like Imran need to educate themselves about topics about feminism and womanhood. Use your mind before you use your tongue, as one wise person advised. Rather than making big promises about cleaning up government and world-class schools and hospitals, maybe get the simple, basic and most important things right.

@ImranKhanPTI should make it a point not to speak about issues he’s not acquainted with, #Feminism #metoo etc he may be well intentioned but these are not to be taken lightly and casualy remarked upon since women have made great sacrifices to achieve what they have

It is imperative that Imran, before being a politician, practices being a decent human being first!